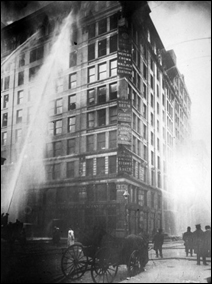 Dr. Peter Rachleff, professor of history at Macalaster College in St. Paul, thinks of the immigrant workforce as the “canary in the coal mine of our society.” The way employers, government and the media treat them “has been — and is — an indication of the kind of treatment that will soon come our way.”

One hundred years ago this month, 146 garment workers, most of them young, Jewish and Italian female immigrants, died in a fire at the Triangle Shirtwaist Factory in New York City. “Exit doors had been locked, elevators failed, fire escapes crumbled, and the fire department’s ladders did not reach high enough,” according to a description provided by Jewish Community Action, one of the sponsors of a series of upcoming events.

Rachleff contends that the fire stands as a warning about what can happen when workers are not allowed to organize.  “Two years before the fire, women workers in the Triangle shop participated in a strike for union recognition.  They lost.  With no collective voice, their only choice was to continue to work in a dangerous setting.”  The fire marked a turning point in labor history.

Rachleff, working with JCA, is one of the coordinators of the series, called “Then and Now: Immigrants, Workers and the Search for Justice.”  They’ve enlisted more than 30 historical, educational, religious, labor, immigrant rights, and social justice organizations to support and participate in the project.

The kickoff is a film screening about the Triangle Shirtwaist Factory fire and panel discussion on Sunday, March 6, at 3 p.m. in the John B. Davis Auditorium at Macalester.

Other events in the series include the JCA Freedom Seder, photo exhibits, documentary film screenings (including the Minnesota premier of “Abused: The Postville Story”), Jewish Labor history bus tour, and other study and education sessions. For a complete listing of events and participating organizations, go here.

According to Rachleff, the Triangle Shirtwaist Factory fire “should stand as a warning to all of us of what can happen when workers are denied the right to organize and protect their interests — indeed, their very lives — through collective bargaining.”

The scene playing out at the Wisconsin state capitol illustrates the timeliness of this examination of labor history, Rachleff says.  Gov. Scott Walker “wants to strip public employees of their right to collectively bargain about their benefits, their job descriptions, their working conditions.”

Rachleff hopes the series “can heighten our awareness of not only the connections between the past and the present … but also the linkages between immigrant and native born workers, especially in an era of hard economic times, like today.”