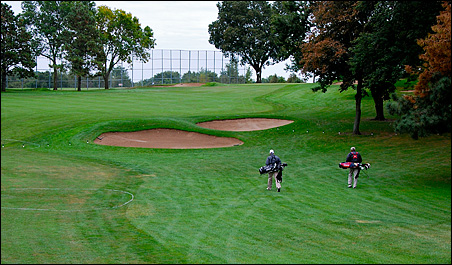 It’s a course I’ve always loved, but played infrequently over the years. About a year ago I decided to change that when I came to the realization that Keller is my hands-down favorite course to play.

I love this special place for several reasons — the beauty of the landscape, the course design, its rich history and my personal experiences there.

Beauty
This place is gorgeous. You don’t have to be a golfer to appreciate the views of the rolling green-carpet terrain with its beautiful trees and ponds and dramatic changes in elevation. 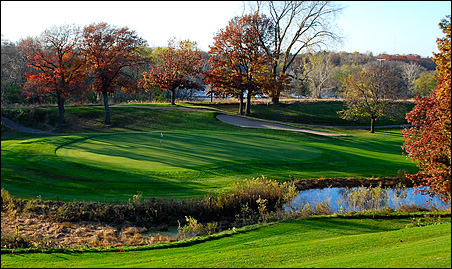 MinnPost photo by Steve Date
The green on hole No. 12 (formerly No. 3).

Golf course design
Paul Coates, the chief engineer of Ramsey County, drew up the original layout in 1929. Imagine that happening today: Hiring a county engineer to design a golf course of any kind, let alone one that would host PGA tournaments — impossible.

According to a Golf Digest article, Coates, at his own expense, traveled to many of the great courses of his day for ideas. He also spent a lot of time picking the brain of legendary golf course architect Donald Ross. He should get some sort of award for rising to a challenge way above his pay grade and expertise — and knocking this project out of the park. 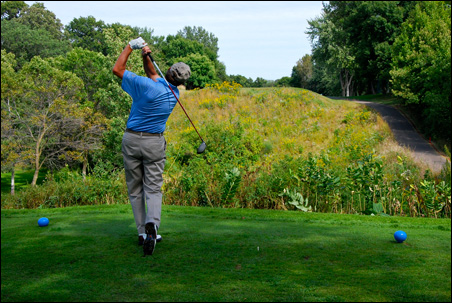 MinnPost photo by Steve Date
Roger Buoen hits a drive over a wildflower-filled ravine toward the fairway on the 16th hole (old No. 7).

History
Keller began hosting a PGA tour stop, The St. Paul Open, in 1930 — its second year of operation. This tournament continued until 1968. Keller was also the site of two PGA Championships, a Western Open, 11 LPGA events and a National Publinks Championship.

By the 1960s, Keller had become a lower-echelon course on the pro tour, lacking the length and amenities to which the PGA was becoming accustomed. But it was still Minnesota’s chance to host a big-league golf event, and we loved it.

All of the great pros of the ’30s through the ’60s played there. Back in the days when most of the top players played most of the tournaments, you had a chance to see them all at a relatively minor stop like St. Paul. One can get misty-eyed just reciting the names as you walk around the place — Hagen, Hogan, Snead, Sarazen, Nicklaus, Palmer — and on and on.

Of the many old photos that hang in the Keller Clubhouse, I think this one is my favorite. Ben Hogan leads a group of spectators on the narrow walkway leading to the 16th (old No. 7) fairway. 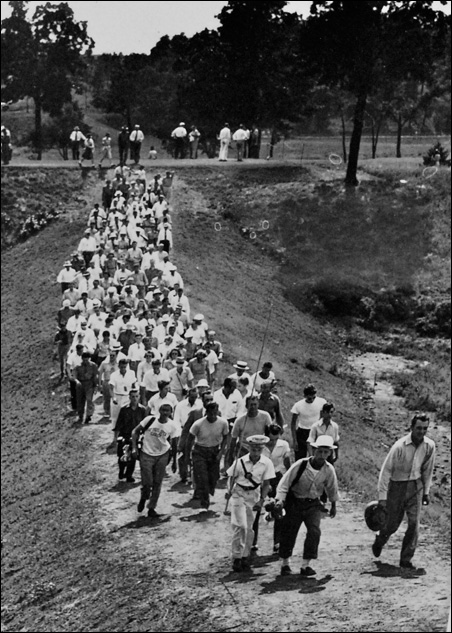 Keller certainly has its share of stories. I’m not sure how true they all are, but they’re fun to hear — and repeat.

Legendary golfer Gene Sarazen supposedly once took 12 strokes on the short par-3 13th (now the 4th) hole, withdrew from the tournament and vowed never to return. The rather large oak tree smack in front of the green is one of only two original trees that were growing on the land before they designed the course (the other is in front of the 17th hole). 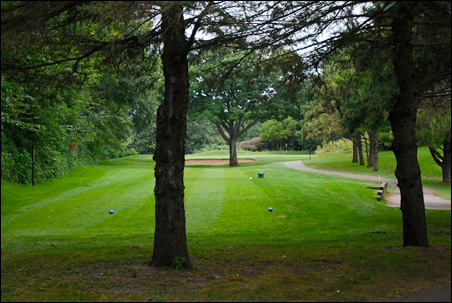 MinnPost photo by Steve Date
An inconveniently placed old oak tree guards the front of the green on the 4th hole (old No. 13), the site of Gene Sarazen’s demise.

Gangsters of the ’20s and ’30s sometimes came to St. Paul to get away from the authorities in Chicago. Legend has it that John Dillinger quickly dropped his clubs and jumped a train next to the 3rd (now the 12th) hole when he heard that FBI agents were coming. 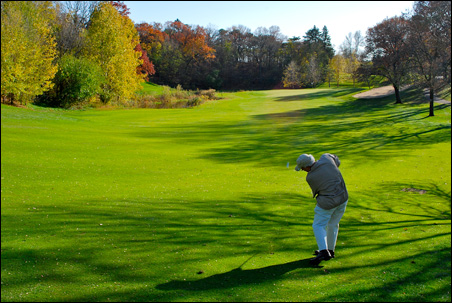 MinnPost photo by Steve Date
Bob Whereatt does his impression of John Dillinger on the hole where he supposedly dropped his clubs and hopped a train. I didn’t know Dillinger was a lefty.

“Champagne Tony” Lema wrote in his book, “Golfer’s Gold,” that in the evening, after a drink or two, the guys would hit balls from the old 3rd tee across Highway 61 into Keller Lake. 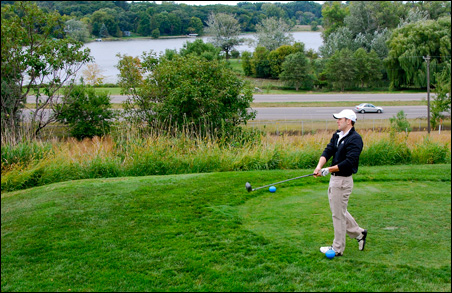 MinnPost photo by Steve Date
Justin Buoen watches his drive from the tee where tipsy pros used to hit balls into Keller Lake across the highway.

A few years after the PGA left Keller, the LPGA arrived with the Patty Berg Classic, which ran from 1973-1980, named after our local legend who helped found the women’s tour. It kept Keller alive as a professional venue for a while longer and provided more memories for those of us in the galleries. It was a great course for the women and it was sad when the tournament left for bigger and more modern suburban courses. 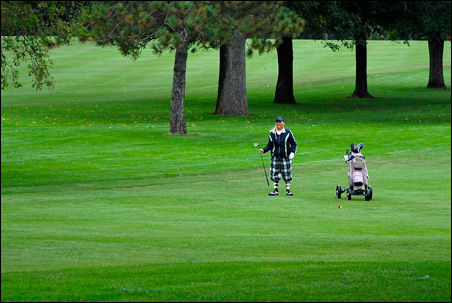 MinnPost photo by Steve Date
Keller takes you back in time to the point where wearing clothes like this just seems like the right thing to do.

Personal Experiences
I don’t remember much about that first visit to Keller with my golf team other than Mr. Peterson’s advice and feeling excited up about playing a course that the pros played.

But later that summer I went back there with my friend Steve Erickson to watch the St. Paul Open. I remember walking up to the clubhouse when we arrived and the first player I saw was Tom Weiskopf, one of the top pros of that era. He was standing at the top of the stairs that led down to the locker room. It was a thrill. Then we walked a few yards over to the practice green and listened to Chi Chi Rodriguez making wisecracks. It was all very cool.

Roger Buoen, MinnPost’s co-managing editor, also has a lot of memories of watching the St. Paul Open as a teen, and we always talk about those days when we play Keller together. My favorite story of his also involves Tom Weiskopf, who was known for a graceful swing but also for a bad temper and getting flustered on the golf course. Roger was sitting next to the second green (then No. 11) when Weiskopf’s group came through. After missing a short putt on the green, Weiskopf walked over to Roger and made eye contact. Roger was, of course, excited that one of his favorite golf stars was about to say something to him, perhaps offering words of golfing wisdom. “Can’t putt on these shitty greens,” big Tom said as he walked away. That cracks me up every time I think about it. 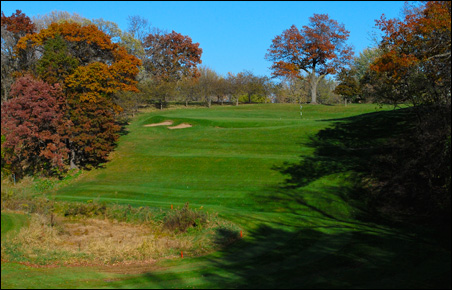 MinnPost photo by Steve Date
The 13th hole (old No. 4) is a short, but tricky par-3 over a deep valley. 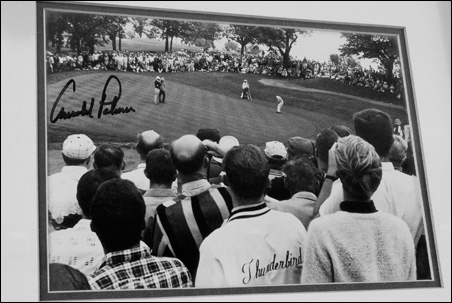 MinnPost photo by Steve Date
An autographed photo of Arnold Palmer putting on the 13th green (old 4th) hangs in the Keller Clubhouse.

I have a memory for just about every hole at Keller, whether it’s from a St. Paul Open or from playing there ourselves as teens. I vividly recall lipping out a six-foot putt on the second hole of a playoff in the regional tournament my senior year in high school that kept me out of the state tournament in 1971. It was the same green Weiskopf missed his putt on. I guess I couldn’t putt those greens either, shitty or not.

Keller will be undergoing a major renovation, scheduled to begin about a year from now. I have heard that most, if not all, the greens will be rebuilt and the clubhouse and little stone pro shop building will be razed. I understand that some of the greens need to be rebuilt. But I hate to hear that the clubhouse and pro shop have to go. They are historically significant structures (with emotionally significant memories) and should be preserved. 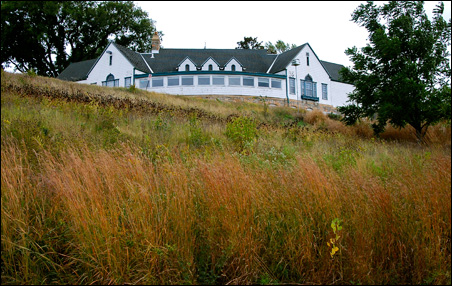 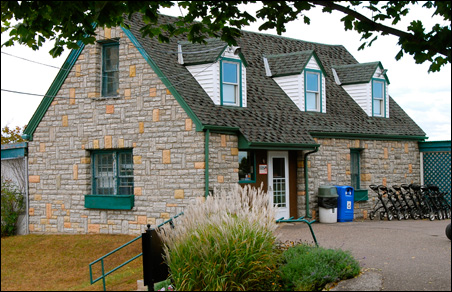 MinnPost photo by Steve Date
The little stone pro shop building next to the first tee. They don’t build them like this anymore.

But soon both buildings will be gone. Please allow me to scream just once, “Don’t do it!”

I haven’t seen the architect’s plans, but we can only hope that they preserve as much of the original design of the course as possible.

When I recently played the first hole, I heard Mr. Peterson’s voice, as usual, and aimed a little farther left. But the ball didn’t obey and sailed over the corner toward the green.

It ended up behind a tree.

I’m going to being playing Keller as much as I can over the next 12 months and take a lot of pictures. I’m worried the upcoming facelift is going to change this sweet old lady beyond recognition. I want her to look old, not new.

When the time comes, I hope somebody scatters some of my ashes around there, so I can be a tiny part of this place that is such a part of me. 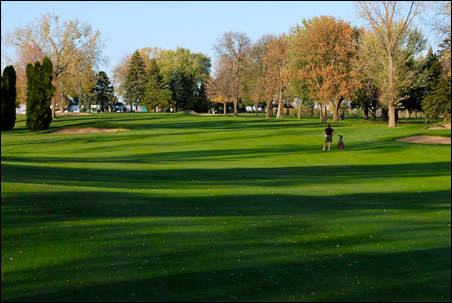