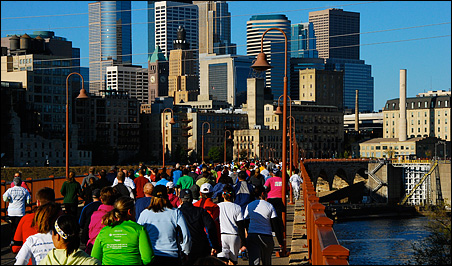 Michelle Frey is a professional distance runner, and her husband, Jacob, used to be one. This past January they got the idea to organize a 5K run in Minneapolis to raise money and awareness about an organization called Minnesotans United for All Families, which was launched as the coalition to defeat the proposed constitutional amendment in Minnesota that would ban same-sex couples from getting married.

I took my camera along for the run this past Saturday. It was a cool, windy morning, but several thousand enthusiastic runners and supporters showed up for the event that began and ended at the Wilde Roast Cafe at Riverplace in downtown Minneapolis.

The political agenda is serious. And “The Big Gay Race” is a catchy name, but don’t be fooled by that. This was no gay pride parade. As I walked around and ran the race, I realized that what this gathering was really about was the importance of family — all families. There were people of all ages and there seemed to be equal numbers of gay and straight people, but you couldn’t really tell who was who, and it didn’t matter.

This was a loving and caring community coming together for a pro-marriage and pro-family celebration, pure and simple. 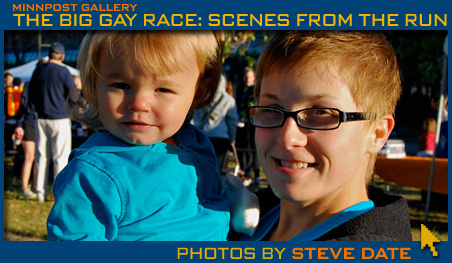