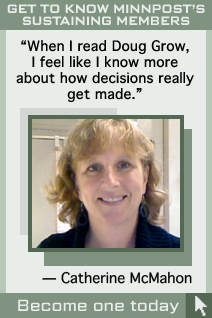 The Mississippi above St. Anthony Falls in downtown Minneapolis is a different river than the stretch from the falls to Ft. Snelling a few miles south. This section, which separates Minneapolis from St. Paul, is the only true gorge on the entire length of the river.

The deep channel and steep banks are the result of 10,000 years of erosion and migration upriver of the river’s only waterfall as it broke away a limestone layer protruding over softer sandstone underneath. The falls stabilized at the present location in the 1870s.

The fall colors peaked more than a week ago in the Twin Cities. When I explored this part of the river with my camera last weekend, many trees had lost their leaves, but brilliant reds, oranges and yellows were still to be found on the bluffs and in the little tributary valleys. I ended up down by the water’s edge, where the Minneapolis Rowing Club was taking some of their last excursions of the year.

Now, just a few days later after I shot these photos, the colors on river bank have mostly faded to the winter hues of brown and grey.

But it’s still a beautiful walk. 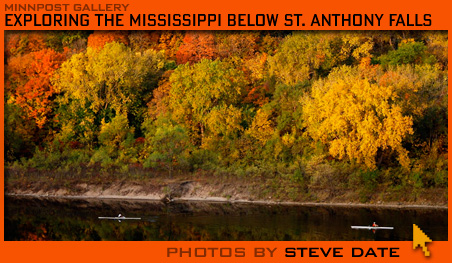