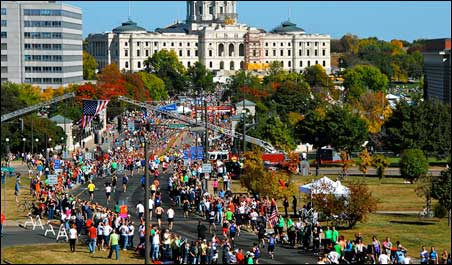 MinnPost photo by Steve Date
A strong finish from the Cathedral to the Capitol.

I don’t like to admit this, but when I used to run marathons I found it a little irritating to hear people yell “looking good” especially toward the end of the race. In my mind I was looking anything but good. But watching the Twin Cities Marathon last Sunday as spectator for the first time in 20 years changed my mind.

It made me realize that perhaps the greatest value of this race is its role as a community event. It’s a little like a small town parade, where the townspeople are both the entertainment and the audience. They put on a show for themselves.

On one level, the marathon is one of the purest forms of human competition — running a long distance against another person. But out of a field of 8,500 runners, only a few dozen have any chance at all of winning the race.

For most, running a marathon is a personal triumph. While most people in reasonably good health could run 26.2 miles if they put their mind to it and dedicated a year to training, the fact is that few actually do.

As a runner, the scenery and the crowds become a blur as you become part of the river flowing through the course. You know you are in the middle of something special, but you can’t take time to stop and look around. I enjoyed being able to take that time this year.

On Sunday, it was about our community. I was touched by the personal interactions between runners and spectators. There were 8,500 runners and many thousand more spectators — total strangers — being happy together and nice to each other. Hand slaps, signs, cheers, volunteers handing out water and runners thanking them and apologizing for spilling it. I saw kids running up to hug their moms on the course like she was a star — about an hour after they’d dropped her off at the start line. I was thrilled seeing the exuberance of runners as they were near the finish and felt the pain of those who couldn’t make it.

They were looking good, and I found myself yelling it a few times.

We were all looking good. 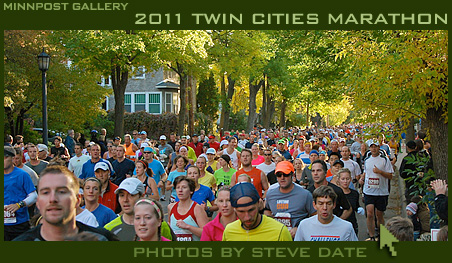