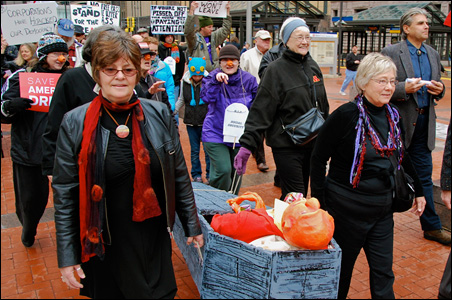 MinnPost photo by Steve Date
Protesters participate in a “New Orleans-style wake for the middle class.”

The American Dream movement, MoveOn.org and OccupyMN joined forces Sunday to hold a “New Orleans-style wake for the middle class” at the Hennepin County Government Center Plaza in Minneapolis followed by a march to the Metrodome just before the Vikings-Packers game.

According to an email invitation from a MoveOn member, the event was organized to “highlight the jobs and security the middle class has lost during this economic crisis, celebrating our reawakening and discussing our journey back to a just and viable economy via the Contract for the American Dream.”