The Mexican holiday of Día de los Muertos (Day of the Dead) originated with the Aztec culture in pre-Columbian Mesoamerica. After the Spanish conquest, the tradition was moved to coincide with the Catholic All Saints Day, which is the day after Halloween in modern America.

Although the images of Day of the Dead include human skeletons and depictions of death, those who celebrate it want it known that it is not ghoulish or macabre and not Halloween, but rather a joyful connection of family and friends in life and death. While there are regional differences in the rituals, it is believed that it’s a time for families to remember and communicate with loved ones who have crossed over into death.

Ofrendas, or altars, are assembled in homes and businesses to remember and honor those who have passed on. They include photos, foods and personal items intended to entice the deceased to come back for a brief visit. Images of skeletons and skulls are everywhere — on drawings, paintings, paper cuttings, candy, cakes and bread — all to mock death and welcome back the departed spirits. Skull masks are worn and many people paint their faces in whimsical depictions of death.

I took my camera along to several Día de los Muertos events in the Twin Cities, including at the Minnesota History Center in St. Paul. In Minneapolis, the Midtown Global Market, Mercado Central, Centro El Zócalo and El Colegio High School all had ofrendas and art work on display and hosted events over the past week.

The Ketzal Coatlicue Aztec dance group, led by Susana DeLeon, made several appearances, including a procession Tuesday evening commencing at Mercado Central on Lake Street. Participants sang and read poetry while walking the 12 blocks to El Colegio School, where a large crowd welcomed them as they performed traditional Aztec dances.

Decorations and ofrendas will remain on display for several weeks in many locations. 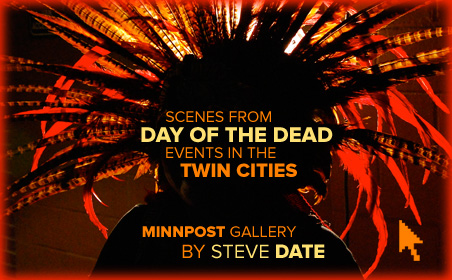