The early 20th-century houses in Minneapolis designed by William Gray Purcell, George Grant Elmslie and George Feick, Jr. are turning 100 years old. They are prime examples of Prairie School residential architecture. Some are in nearly pristine condition, while others have been unsympathetically remodeled or have been allowed to deteriorate, showing their centenarian sags and wrinkles. Because of that, some of these original works of art are financially within reach of less-than-wealthy people. I know this, because I used to own a Prairie School house at 4920 Dupont Ave. S. 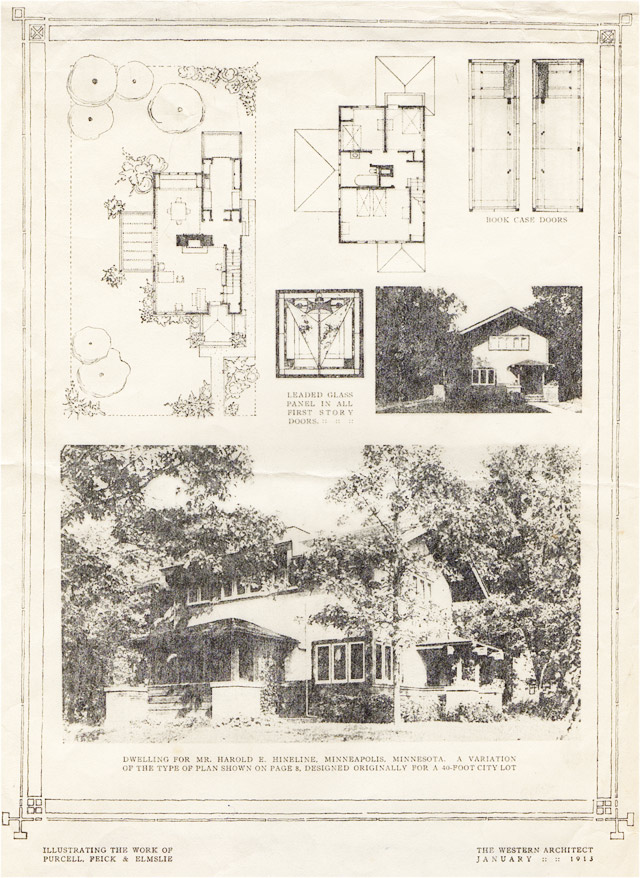 The house I used to live in was featured in the January, 1913, issue of The Western Architect..

Dixie Legler and Christian Korab wrote about our house in “At Home on the Prairie: The Houses of Purcell & Elmslie.” An employee of a company that had commissioned Purcell, Elmslie & Feick for a commercial project wanted them to design a house for his daughter and her new husband, Harold E. Hineline. “[He] wanted us to do a nice little house for the young couple,” said Purcell.

They used a barn that had been converted into a house as the inspiration for the design. It was “a very simple project [that] had a great influence on all my later work,” Purcell said. “In this little house I made my first detailed examination of the relation of a building to the size of people and the geography of movements.” 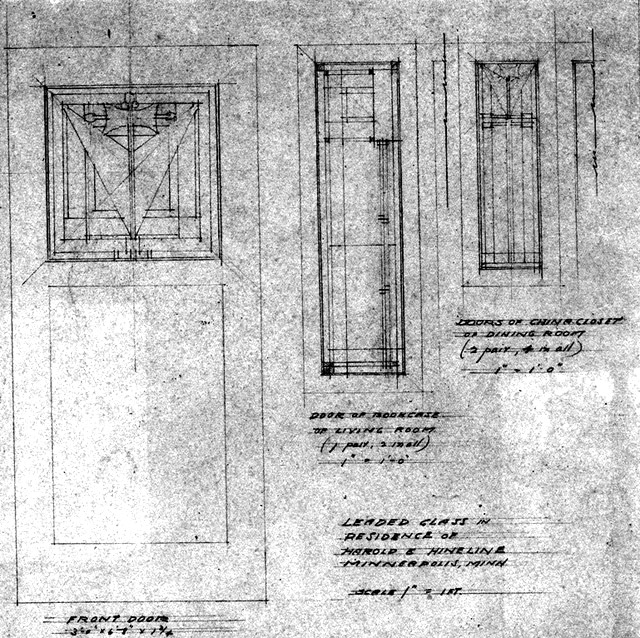 MinnPost photo by Steve DateDrawings of leaded glass windows in the Hineline house.

Purcell grew up in Oak Park, Ill. He worked for a time in Louis Sullivan’s studio, where the Prairie School of architecture was born — Frank Lloyd Wright being its most notable progeny. Feick, who was Purcell’s classmate at Cornell Architecture School, also worked for Sullivan. In 1907, Purcell and Feick decided to leave Sullivan and opened a design office in Minneapolis. In 1909, they talked Elmslie — Sullivan’s chief designer — into coming to Minneapolis to join them. 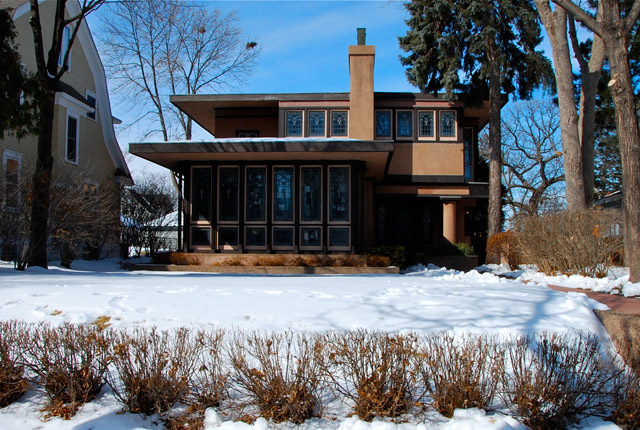 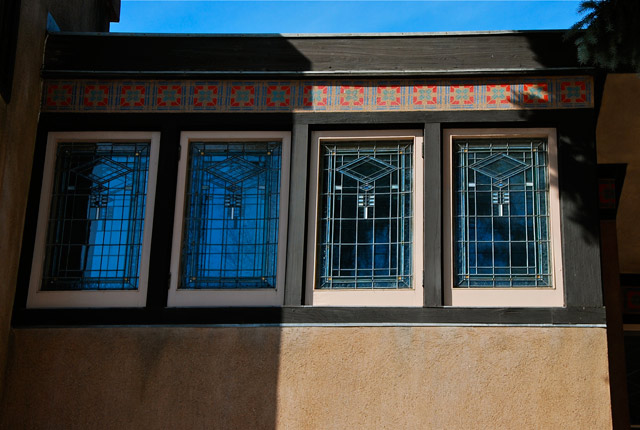 They did many commissions — houses, churches, banks and other buildings — all over the Midwest. Some of their best-known works in Minnesota are the Merchants Bank in Winona and the Purcell-Cutts and E.L. Powers houses in Minneapolis. For a time, Purcell, Elmslie & Feick were the most successful Prairie School architecture firm outside of Chicago. In a mere eight years, various permutations of this three-man team sprinkled more than two-dozen of these residential gems around the Twin Cities. 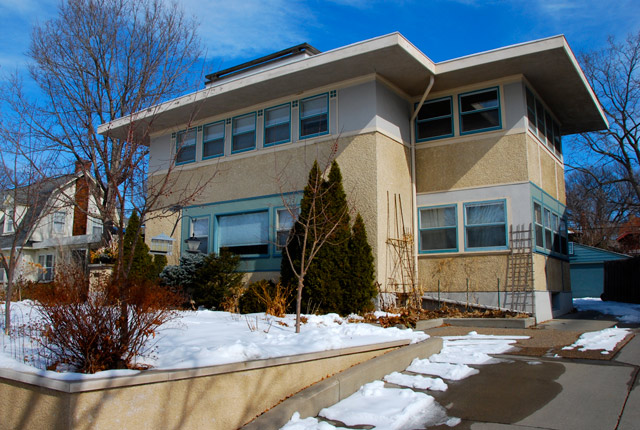 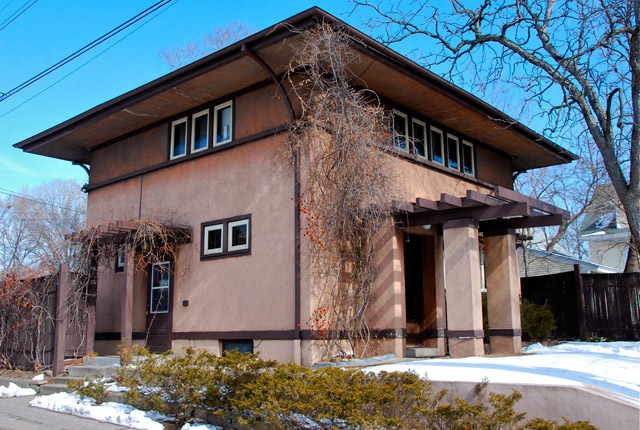 Most of the Twin Cities’ Purcell and Elmslie houses can be seen (at least the front view) in a leisurely couple of hours of driving around. When we lived in the Hineline house, people would sometimes stop and look at the house and maybe snap a photo or two. Because we weren’t the most astute students of architecture at the time, we mostly stabilized the deterioration in the house and are grateful that subsequent owners have put the time, thought and money into repairing and replacing some of the detail that had been lost over the years. Thankfully, many of the owners of other Purcell and Elmslie houses have done the same. 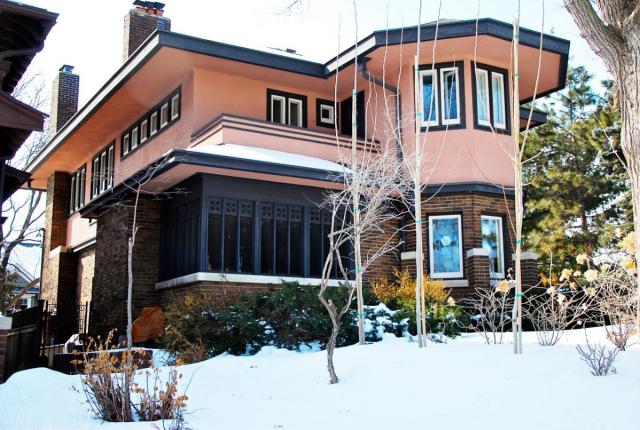 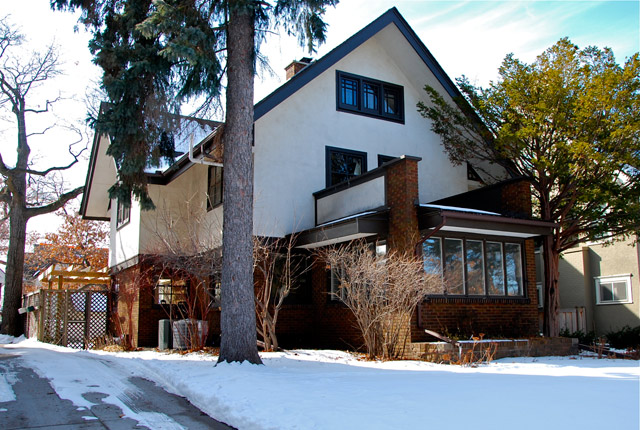 These days, I’ve become the gawker with a camera, trying to catch a glimpse of some of these attractive and historic homes without being too intrusive. Last Sunday’s blue sky and new blanket of snow framed the simple, understated beauty of this uniquely American “art you can live in.” 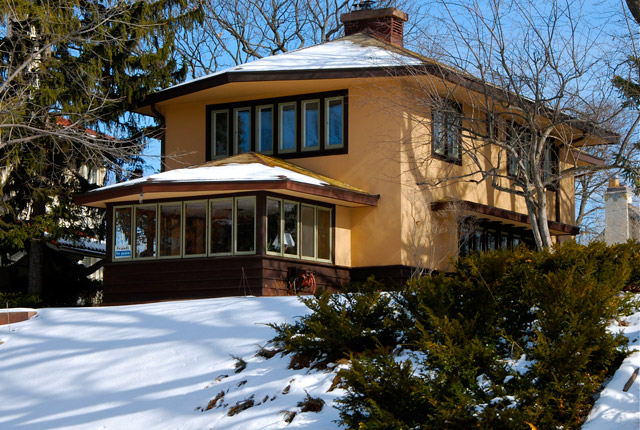 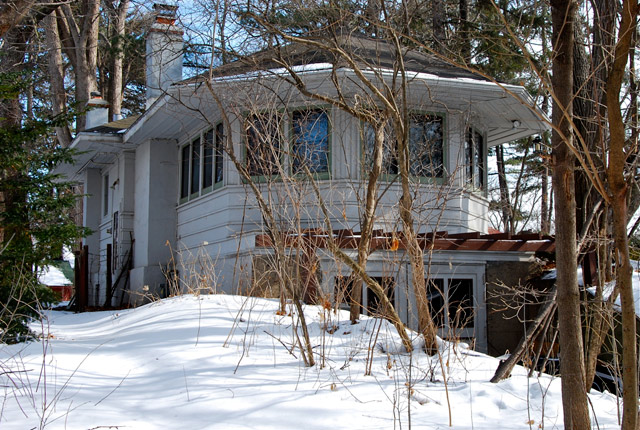 Visit the Prairie School Traveler website for a listing of Purcell, Elmslie & Feick houses in Minnesota along with those by other Prairie School architects. 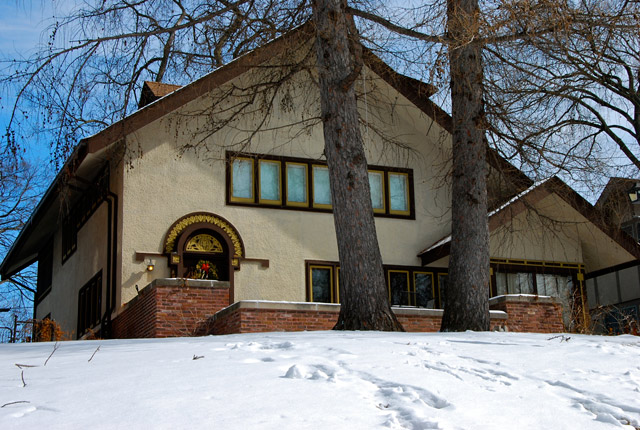 Views of Minneapolis’ Prairie School houses: ‘Art you can live in’