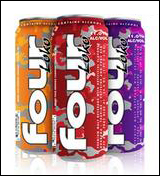 The Central Washington University students were treated for alcohol poisoning after drinking Four Loko, a spiked energy drink that delivers a potent mix of stimulants and booze.

The drink comes in 23.5-ounce cans and has an alcohol content equivalent to four beers. The fact that Four Loko is cheap (generally less than $3 per can), carbonated and available in a variety of fruity flavors has made it popular with underage drinkers.

Click here to read official statements issued by Phusion — the makers of Four Loko — regarding the incidents at Central Washington University.

Are drink makers ever at fault for underage drinking? Give us your take in the comment section below.