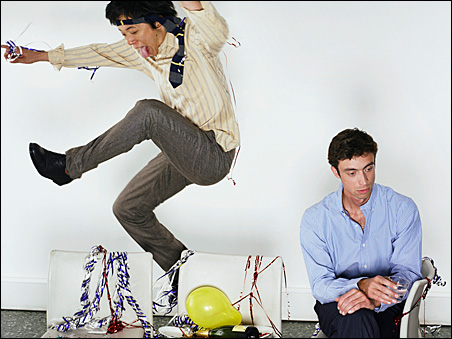 Thanks to everyone who risked public shame and ridicule to submit embarrassing office stories for $50 in sushi, and to help us inaugurate MinnPost’s Young Professionals Network. Congratulations to Molly who, in an effort to entice her husband in a little afternoon delight, accidentally sent a love note to a married co-worker:

I had been at my new job less than 6 months. It was spring and a beautiful day outside. I emailed my husband, from work, seeing if he could take the afternoon off so we could be outside and enjoy the day. I started the email with “honey” or “love”, some pet name I have for him, but not his name. I also added in the email that I loved him.

He never replied back, so I assumed he couldn’t get off work, and went about my day as normal.

Sometime later that afternoon, a co-worker (on par with my supervisor) came up to me and said “um, I am flattered but I am married”. I thought that was a really odd thing to say…so was I. Thinking I had misunderstood, I asked him “what?”. He said “Your email…I am married.” I didn’t know what he was talking about and he told me about the email I sent, asking him to take the afternoon off!!!! I was mortified! I looked in my sent folder, and instead of creating a new email, I had lazily clicked reply to an old email from my husband. Well, my husband’s name and my co-workers name both start with B. So they were side by side in my sent items…and I clicked on the wrong name, sending the lovey-dovey invite to my married co-worker instead of my husband!!!!

It got around the workplace quickly and I was eventually able to laugh at it! 🙂

Molly wins a $50 gift certificate from YPN sponsor Tiger Sushi. Here are excerpts from a couple of other entries:

At a large event at work, I once texted my coworker to say that the boss had just come by to check on things and that “I totally kissed his ass.” I didn’t find out until the next day that I had sent that text to the boss!!!!!!!!!! Yuk. — Heather Orcel

So day two of my internship began like any other day until I felt a breeze. Stepping out of my car in my page 9 look, a sudden chill came over me…well, came over my ass. My skirt had ripped right down the zipper exposing my shelf butt to the world. I work in a place where most people in the office work on hourly shifts. Getting to work a few minutes before the hour means a few more minutes for your daily dose of celeb gossip. “Am I moving in slow motion?,” I asked myself as I looked around at the people sitting in their cars. — Alexandra West

At an old job I had this not-so-bright boss. One day I found a picture of a lolcat on icanhascheezburger.com of a cat puzzling over a crossword puzzle that said, “I gief up dis corsswordz 2 hard 4 me.” I titled it, this is [insert bosses name here] and sent it to my co-worker, only accidentally I sent it to our client, who has the same first name as my co-worker. Who then forwarded it to my boss. Needless to say, he was not pleased nor found it humorous. — Larisa Johnson