On Saturday, volunteers from Propel and MinnPost’s YPN helped make Valentine’s Day special for the kids in the Jeremiah Porgram.

Valentine’s parties were held at both the St. Paul and Minneapolis campuses of Jeremiah Program and YPN had awesome volunteers come out to both.

I was at the St. Paul campus — along with MinnPost volunteers Bill Breon, Erin Raffensperger, Jessica and Michael Brooks, and Propel volunteers Domic Ciresi and Meredith Wank. We had a terrific time and laughed a lot. 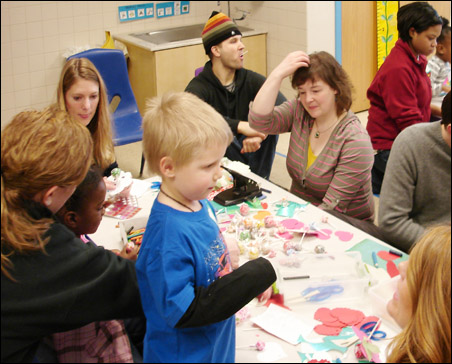 There’s nothing like hanging out with preschoolers to give you some perspective on life.

As we spread sugar cookies with pink frosting and heart-shaped sprinkles, one girl told me, “My name has six letters. How many does yours have?”

She pointed at me and burst out laughing. “Your name only has five! You don’t have many.”

Erin was told by another preschooler to stop speaking in Spanish, even though she wasn’t. “Just stop,” the girl said exasperatedly. 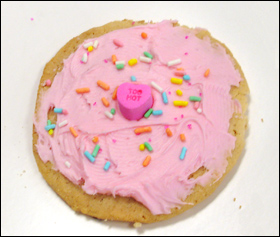 These kids were so entertaining, I didn’t even stop to sneak a cookie — and there were plenty to be had.

One girl dressed all in purple (she informed us that pink and purple were her favorite colors) decorated a mountain cookies for all her siblings and cousins — even those that lived in Kansas and whom she’d never met.

The girl sitting next to her in the rainbow top said she was also making a cookie for her little sister.

“Do you help take care of your sister?” I asked.

“Yeah, I feed the babies and they grow up,” she said, slathering a half-inch of frosting on her cookie.

“I bet your mom thinks you’re a great helper,” I said.

“Yeah, I make the babies grow up. But I don’t have no children,” she assured me, pointing to herself.

Now the only thing we had to worry about was the excessive sprinkle-pouring — a fever rapidly catching around the tables. 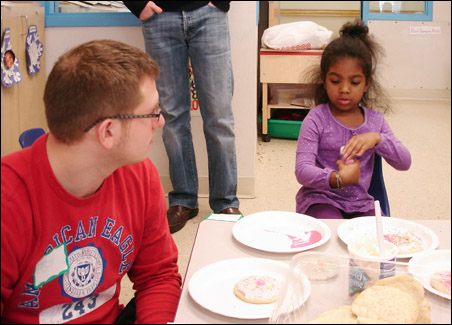 After several cookies were literally piled like pyramids with sprinkles, the plastic jars had to be confiscated.

“But she’s just try’ na shake-a shake-a,” the rainbow-clad girl insisted when the sprinkle jar was gently taken from her neighbor. 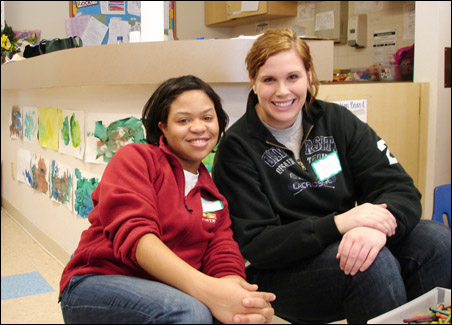 Over at the lollipop table, volunteers were helping kids make edible flowers. Adults punched holes in paper hearts and leaves and kids slid them onto the lollipop sticks and secured them with tape.

Last Valentine’s the craft involved glue and, apparently, things got a little out of hand. Lesson learned. Tape is key. 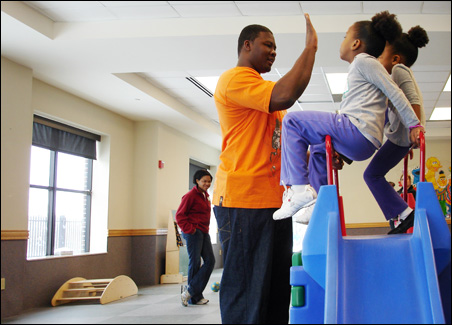 The this year, the hitch was that kids wanted to devour the lollipops, rather than make them into works of art. (Strangely, they didn’t try to eat the cookies.)

When the rainbow-clad girl started unwrapping a sour apple Blowpop, I told her she wasn’t allowed to eat it until she had asked her mother for permission.

“No,” she vouched, “my momma said I could eat it this minute.”

I said I doubted that.

Her reply was immedate: “No, momma said, ‘you better eat that sucker.'”

This girl has promise. 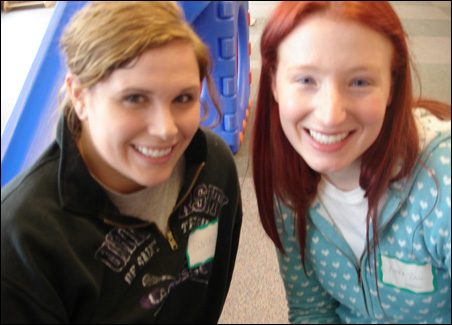 MinnPost
Sarah and me, Audra Otto (A five-year-old took this picture — pretty impressive!)

Thank you to all the young professionals who came out to volunteer this weekend! We really appreciate the time you gave to ensure the kids from Jeremiah program had a great time!