As more and more people get their news through Facebook — or simply wait for links to be shared on Twitter — are RSS aggregators becoming obsolete? We asked YPN readers to weigh in.

In a poll posted earlier this month on YPN (Are Facebook and Twitter killing RSS?), we asked readers to tell us about their feed-reading habits and opinions on the future of RSS aggregators.

Respondents wer split, however, over whether or not Facebook and Twitter would replace RSS aggregators in the near future; 43.4 percent said the social media platforms would end up killing RSS, while 56.6 percent said RSS is here to stay.

Although only 32.1 percent of respondents said they currently use Facebook as an RSS reader or news aggregator, a significant portion — 58.5 percent — said they use Twitter as one.

View the detailed poll results below.

Question 1: How many RSS feeds do you read regularly?

Question 2: How often do you read news in an RSS reader?

Question 3: Among RSS readers, which do you prefer? 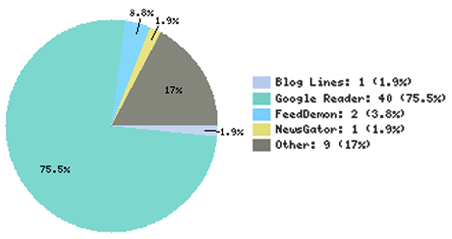 Question 4: Do you use Facebook as an RSS reader/news aggregator?

Question 5: Do you use Twitter as as an RSS reader/news aggregator?