MinnPost’s YPN extends congratulations to Mitchell Hoeft, who was featured in the August 2011 issue of Public Works Magazine out of Chicago, Ill. 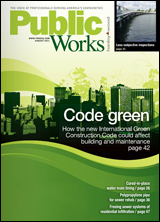 Hoeft is an engineer for the City of Golden Valley, Minn., and a member of the Economic Development Association of Minnesota Young Professionals (EDAM-YP).

Along with Paul J. Pasko III, a principal at the Minnetonka, Minn., office of Short Elliott Hendrickson, Hoeft wrote an article for Public Works about three non-adjacent cities in Minnesota signing a joint powers agreement to install one mile of an emerging rehabilitation technique.

According to the article, “budget cuts, potential push-back from recession-weary residents and site-specific variables” converged in 2010 to prompt Fridley, Golden Valley, and Hutchinson, Minn., to share a contract for installing structural cured-in-place pipe (CIPP) — a lining system designed specifically for pressure pipes — into one mile of trunk water main pipe in various locations.

Like structural CIPP for sewers, the trunk water main pipe application uses robotically-controlled cutting devices to restore flow to service pipes once the lining is cured and passes its pressure test. … However, few contractors have enough experience with the robots developed specifically to reinstate water service pipes.