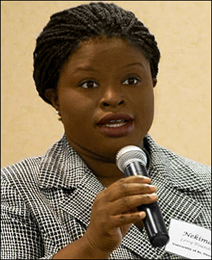 A professor at the University of St. Thomas School of Law, Levy-Pounds’ scholarly work focuses on African-Americans and the law; the impact of the war on drugs on African-American children and families; the treatment of women in prisons; and intersection of race, class and the criminal justice system.

She is the founder and director of the Community Justice Project, an award-winning civil rights legal clinic in Minneapolis that addresses the complex issues affecting the poor and working poor.

At the Community Justice Project, Levy-Pounds supervises students on a variety of civil rights issues such as police misconduct and brutality, juveniles in the justice system and public education system, restorative justice for criminal defendants, collateral consequences of criminal convictions, and community education, with an overall goal of achieving social justice for members of marginalized communities.

In 2011, the American Association of Law Schools conferred Levy-Pounds with the Shanara Gilbert Emerging Clinician Award for her demonstrated commitment to teaching and achieving social justice, particularly in the areas of race and the criminal justice system.

Because of her distinction within the discipline of community justice, Levy-Pounds was selected by Senator Al Franken to advise him in his decision to nominate Justice Elena Kagan for the U.S. Supreme Court.

An active contributor to the field of constitutional law, Levy-Pounds regularly serves as a consultant to local civil rights organizations and community groups and is a frequent speaker at national and international forums.

Her volunteer service work includes serving as a member of the Senate File 2725 Legislative Work Group (appointed to represent St. Paul NAACP in reviewing laws, policies and proposals related to criminal intelligence, investigative data and gang databases and making correspondent recommendations to the Minnesota legislature), a member of the FBI Civil Rights Advisory Group, and as a member of The Minneapolis Foundation’s the board of directors.

Most recently, Levy-Pounds was appointed as chairperson of the Minnesota State Advisory Committee to the U.S. Commission on Civil Rights.

Regarding the future of Minnesota, Levy-Pounds hopes to see improvement in the quality of life for African-Americans; she especially hopes to see more mobilization of grass roots initiatives and collaborations between businesses, the philanthropic community and government agencies to find solutions to current economic, racial and legal inequities.

To learn more about Levy-Pounds and her vision for the future of Minnesota, watch her TOYM video:

Click here to find out more about the TOYM program and the upcoming 2011 TOYM/OYF Awards Celebration on Saturday, Dec. 3.

Stay tuned during the next two weeks as we feature profiles of each of the 2011 TOYM honorees. Up next: Savannah Leyde, founder of Taylored to You, a nonprofit helping grieving families overcome the sorrow of infant and pregnancy loss.