This week we hear from Lori Saroya, co-founder and president of the Council on American-Islamic Relations, Minnesota (CAIR-MN), the state’s only Muslim civil rights organization dedicated to fighting discrimination, defamation and hate crimes against Muslims and other minorities through free legal assistance, advocacy and education.

Through her work with CAIR-MN, Saroya has striven to promote a better understanding of Islam, educate the community and employers about legal rights and religious accommodation, and give a voice to Minnesota’s Muslims.

During the five years since its founding, CAIR-MN has met with great success, reaching over 30,000 individuals through its diversity training sessions. In the last year alone, the organization assisted over 400 crime victims and facilitated the resolution of 121 cases of religions discrimination.

For its efforts on behalf of equality and pluralism, CAIR-MN received the 2011 Minnesota Council of Nonprofits’ Anti-Racism Initiatve Award.

For her work with CAIR-MN, Saroya has received the St. Paul Foundation’s Facing Race Ambassador Award (twice — in 2009 and 2011), the Islamic Resource Group‘s Building Building Bridges Award (2010), and the Rising Star Alumni Award in the areas of social justice and community advocacy from St. Catherine University (2011). 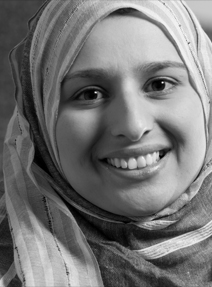 1. In grade school, what did you want to be when you grew up? Is that what you became?
This is probably not the norm for civil rights activists, but in grade school I wanted to be an FBI agent.

Over the years, especially after 9-11, it became even more apparent to me that while we seek to protect our nation from harm, we must also protect the constitution and the principles our nation was founded on.

We must be principled; allowing fear to erode our values as Americans would be far more harmful to our nation than anything outside forces could do to us.

2. What’s the most fulfilling aspect of your job?
CAIR-MN functions on a basic premise: that everyone deserves to be treated with respect and dignity. The individual stories and accomplishments that come from our office are extremely fulfilling — the 300 employees who were granted their legal rights in the workplace after CAIR-MN intervened on their behalf; the student who was allowed to make up a college exam she missed for a religious holiday; the high school students who were able to put an end to daily harassment; the woman who was hired after initially being told to remove her religious headscarf in order to continue with her job interview; or the warehouse employees who were allowed to speak their native language during their breaks.

Right now American Muslims are going through challenging times. In our nation’s history, we have seen other minority groups treated the same way — and it could be a new group in the future. So we’re not just advocating for Minnesota Muslims, we’re protecting the rights that many Americans have sacrificed their lives for.

3. How do you maintain balance in your life?
In addition to mastering scheduling, prioritizing and multi-tasking, I have an amazing and supportive husband who does more than his share of the work. He also constantly reminds me why my work is so important and keeps me motivated.

CAIR-MN is a team effort and I’m surrounded by talented people — board, staff, advisors, interns and volunteers. Without everyone’s dedication, CAIR-MN would not be possible.

4. Which living person do you most admire?
My mom. She has the biggest heart of anyone I know and is the reason my siblings and I are all in careers where we work with underserved communities.

She’s the type of person who, when presented with a “What Would You Do”-type situation, always steps in and speaks out against injustice. I think I got that from her.

She also taught me the importance of being accountable to myself and to constantly check and re-check my intentions.

5. What’s something most people wouldn’t guess about you?
I surprise people on a regular basis. The Muslim community is very diverse and people sometimes come to me with preconceived notions about what a Muslim is supposed to be like.

A few things that have surprised people in the past: I wear the religious headscarf by choice and had to convince my family to allow me to wear it; I went to law school because I strongly believe in upholding the constitution; my marriage wasn’t arranged; to me, “back home” means Iowa; and English is the only language I speak fluently.

To nominate a young professional for “YPN5Q,” email ypn@minnpost.com with the nominee’s full name, employer or contact info, and one or two brief sentences supporting your nomination.