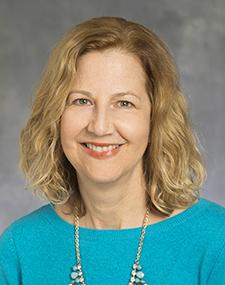 Living through cancer treatment is hard enough — so the foggy feelings of cognitive dysfunction commonly known as “chemo brain” that sometimes accompany cancer therapies can feel like insult added to injury.

Along with her clinical partners, Mary Vining Radomski, PhD, OTR/L, senior scientific adviser at Courage Kenny Rehabilitation Institute, wanted to find out if occupational therapy could help cancer patients learn to cope with the affects of chemo brain. To do so, she designed a study that took a closer look at the impact of focused occupational therapy on 28 patients with breast cancer.

The study found that occupational therapy can help people manage some of the contributing factors to chemo brain including mood changes, stress and fatigue. This year, Radomski, with co-presenter Robin Newman, OTD, OTR of Boston University, presented her findings at the American Congress of Rehabilitation Medicine 93rd annual conference.

When we spoke earlier this month, Radomski told me that she and her colleagues based many of their subjects’ treatments on those already employed by experienced occupational therapists at Courage Kenney.

“In addition to being a researcher, I’m also an occupational therapist,” she said, “so my first impulse is to try to think about techniques that expert occupational therapists have used to successfully help chemo brain patients manage their daily life in spite of their cognitive dysfunction. And we wanted to establish if these techniques could be helpful for all patients.”

MinnPost: Can you tell me more about the term “chemo brain?” What symptoms does this term encompass?

Mary Radomski: People who are in treatment for cancer sometimes describe themselves as experiencing a mental fog, which is popularly known as “chemo brain.” People often describe chemo brain as a general feeling of absentmindedness, of having difficulty expressing themselves, of struggling to find the words they want to say or not being able to multitask. Experiencing these cognitive symptoms, even if they are temporary, can be very disconcerting.

While the popular name for these symptoms is “chemo brain,” I prefer to use the term, “cancer-related cognitive dysfunction.” A clear linkage between chemotherapy treatment and the experience of cognitive fog is yet to be determined, so the term “chemo brain” feels off to me.

MP: If you’re saying that a clear link between chemotherapy and cognitive dysfunction symptoms has not been established, is there another explanation for this phenomenon?

MR: Many cancer survivors will say that from the moment someone says the words, “You have cancer,” they go into a state of chemo brain, or an overwhelming mental fog. This is understandable: A cancer diagnosis is overwhelming. There is life-changing information to process, all sorts of new things to fold into your life. It is not unusual for people who have been diagnosed with cancer but never received chemotherapy to feel like they are in a fog, a chemo-brain-like state.

MP: Does every person who is treated for cancer experience a certain level of cognitive dysfunction?

MR: Many people do experience some cognitive dysfunction during cancer treatment, but not everybody. And though this isn’t the case for every patient, sometimes the cognitive problems can linger even after cancer treatments are concluded. This dysfunction can be disruptive. It can limit a person’s ability to do the things they want to do every day.

MP: How was your study structured?

MR: We were awarded a grant from the Courage Kenny Foundation, and we enrolled 28 women who had completed treatment for breast cancer in our study. Participants, who reported experiencing some cognitive impairment, came for a total of four weekly one-on-one sessions with an occupational therapist. Our goal in each of these sessions was to expose the participant to a wide array of cognitive strategies that could potentially be techniques they could use in their everyday life for improving their cognition.

We evaluated before-and-after changes in study subjects that happened as a result of the occupational therapy interventions we introduced. We called the program “Focus Forward.”

MP: Tell me about one of the techniques that Courage Kenny occupational therapists taught participants.

MR: One of the symptoms of cancer-related cognitive dysfunction can be a difficulty completing everyday tasks. One of the strategies that seemed to be helpful for a lot of our participants was establishing a practice of pausing for a second and collecting themselves thinking, “What do I need to be doing right now?” before answering a question or completing a task. Our occupational therapists coached participants in this technique.

When a person is struggling with this cancer-related cognitive dysfunction, they often feel like they are in a dither. One technique we taught participants was stopping and using their hand as a cue or a mindfulness check, a reminder to ask themselves, “What am I doing right now? What should I be doing right now? What do I need to do next?” and then moving forward.

We even suggested the technique of using your hand as a cue. When they look at their thumb, participants say to themselves, “I’m stopping for a moment.” Then they look at their index finger, and they say to themselves, “What am I doing right now?” The middle finger: “What should I be doing right now?” The ring finger: “What do I want to do next?” The pinky: “OK. Go.”

MP: That sounds like gentle way to work with a distracted brain. Was that the point?

MR: Part of what we were doing with study participants was learning about the importance of reconstructing habits where they may have been dismantled under stress. In normal circumstances, we don’t think about the routine behaviors we perform every day. When we are feeling depleted, routine tasks like getting dressed for work demand so much time and energy. When your life has been upended, when your normal routine has been dismantled, habit sequences go to the dogs. People find themselves needing to be mentally deliberate about decisions that they didn’t even have to think about before. That is exhausting.

We taught participants to re-establish routines, to start doing something at the same time in the same sequence day after day. By taking this approach, one task trips the next like knocking down a row of dominoes.

MP: That’s a practical approach. Were the other techniques introduced in the study similar?

MR: We were focused on answering the question, “What does the study participant most care about being able to do in her life?” Our approach was to find out about the everyday activities and roles that the person in the study cared most about and then try to focus on helping her figure out how to be able to do those activities in ways that were satisfying to them.

When you are in the middle of the chemo fog, it’s hard to problem solve. Being exposed to other approaches can be helpful. Sometimes people benefited from what we call “energy conservation.” We’re not talking about energy conservation like turning the thermostat down, but rather personal energy conservation, about pacing yourself.

Sometimes people have this mistaken notion that when they’re tired, they can just soldier through. When you are undergoing cancer treatment, the opposite is actually true: If you take regular breaks in advance of being tired, you won’t get so exhausted that you can’t reboot. We encouraged participants to learn about the optimum times in their day when they have the energy to take on tasks that required a larger cognitive load.

MP: What do you hope to do with the techniques that you’ve developed for this study?

MR: When we first started this study, we realized that there was not a lot in the medical literature that describes what occupational therapists are supposed to do to help people who are struggling with cognitive dysfunction related to cancer treatment. We worked with expert occupational therapists on our staff to understand the techniques that they’ve used successfully over the years with their chemo brain patients and then we used those methods in sessions with other participants experiencing the same types of symptoms.

Once the methods were defined, less-experienced occupational therapists on our staff tried those same methods with their patients. We discovered that in a relatively small number of sessions, patients seemed to be functioning better cognitively.

MP: Why was it important to record these techniques?

MR: Sometimes expert clinicians just keep their techniques in their head. They don’t write them down. As long as a patient gets assigned to them that’s dandy: They’ll benefit from their experience. But it’s hard to replicate those results when you can’t specify what treatment each patient received.

With this study we were able to record what the expert occupational therapists do. We now have a very detailed and specific guidebook that both novice and expert occupational therapists at Courage Kenny can use to deliver the same level of care for all patients.  We were able to manualize, or write down in detail, these successful cognition techniques so we could create an administration guide.

MP: What were your study’s key findings?

MR: The study intervention was delivered by two expert therapists and two novice therapists. We found statistically significant pre- and post changes for the better in our participants’ performance of everyday-priority tasks, in their social roles, in their level of anxiety. Their level of depression was also lowered.

MR: It helped us refine our perspective. At Courage Kenny, the way we approach the problem of cancer-related cognitive dysfunction is to assume that there are many factors contributing to the problem — some that can be addressed and some that can’t.

We work with the notion that there are multiple factors that influence a person’s thinking at any moment in time. The status of our brain will be only one factor. And chemotherapy treatment alone isn’t the cause. There are other factors: Physical factors like pain have an influence on how clear someone is thinking. Emotional factors like stress or anxiety will also have an influence on cognitive functioning at any given moment in time. Fatigue is also a factor, as are symptoms that affect a person’s general sense of well-being, like nausea.

If all of those things converge at any moment in time, like they often do during cancer treatment, it will influence how sharp a person’s is thinking. Because the evidence still remains unclear, our approach is to see if we can help people function better in at least some of these areas of their life.

MP: What’s next for your research?

MR: The next kind of study we need to plan and implement would be a randomized control trial. That is the real test of whether this approach has a differential benefit, but what we are seeing in the preliminary research is really promising in that we saw statistically significant changes in these tests after just four sessions with an occupational therapist. People were helped in a relatively short amount of time. That’s what we were hoping to achieve because we are advocating for people who are trying to move on with their life after cancer.