Quatrefoil Library blends into the streetscape of Lake Street pretty seamlessly – besides a few rainbow flags hanging from some of the balconies, you’d never know that the building that houses one of the oldest LGBT lending libraries in the United States was anything other than a standard early 21st century condominium complex. Spirit on Lake is an affordable housing complex for members of the LGBT community. Quatrefoil – incorporated in 1983 by David Irwin and Dick Hewetson, and open to the public in various locations sine 1986 – is on the ground floor, up a ramp in the middle of the block. From the outside, it looks like it might be a community room. 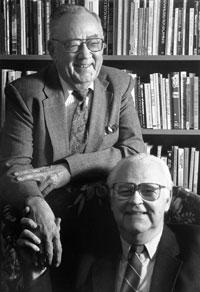 Inside, though, it’s a dizzyingly comprehensive collection of more than 14,000 books and thousands of videos, audio recordings, periodicals, artworks, and archival materials. It’s a modest, neatly furnished space with rows of bookshelves, spaces for reading, and coffee served at the desk up front. The majority of materials are available for lending with a yearly membership. Quatrefoil is entirely volunteer-run, and open seven days a week.

The library is named for a 1950 novel by James Barr, a pseudonym for the American writer James Fugaté. Barr’s novel is a sort of roman a clef  love story between two men who meet in the Navy in World War II, and one of the first mainstream novels to portray openly gay men in a positive light – “Its two thoughtful, masculine heroes provided a corrective to the many mindless, pathetic or flighty gay characters of the forties,” wrote critic Roger Austen in the 1970s. “Quatrefoil is one of the earliest novels that could have produced a glow of gay pride.” And of course, tucked away behind glass in the non-circulating portion of the library, with hundreds of other older, out-of-print and rare books, are several editions of “Quatrefoil.”

A few volunteers greet me at the front desk the night I visit. The weekday hours are 7 to 9 p.m., making it easier in fact than most libraries to visit, at least for people who work during the day. Charles, whose nametag indicates that he’s been a volunteer since 1991, chats with me for a bit about the history of the library, and a little bit of my own history in Minneapolis. “As an outsider,” he asks, “how have you found the LGBT community?” 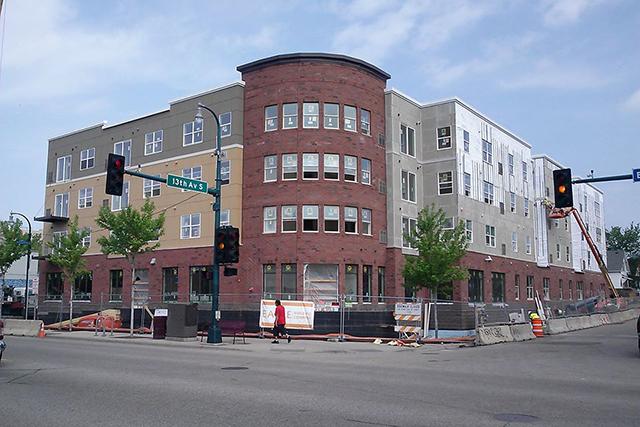 As a sort of double outsider in this context – not a native Minnesotan, nor a member of the LGBT community – I offered that I thought there was an exceptionally good sense of institutional memory. I was, in part, thinking specifically of one of the best local historical books I’ve read in recent years, Stewart Van Cleve’s “Land of 10,000 Loves: A History of Queer Minnesota.” Van Cleve is the former assistant curator of the Tretter Collection in Gay, Lesbian, Bisexual and Transgender Studies at the University of Minnesota, and the book is a thoughtful, well-selected overview of materials from that collection, assembled into a historical narrative that touches on aspects of Minnesota queer culture, beginning with the Ojibwe, and moving over the years through 21st century activist organizations. It includes everything from Xeroxed pamphlets, magazines, and flyers from the dawn of the gay rights movement, to photos, oral histories, and written accounts from much earlier, many of which were rescued from certain obscurity by dedicated activists, volunteers, and amateur archivists, and donated to the collection.

Charles mentions the Tretter Collection, and nods in agreement with my “institutional memory” assessment: “It’s a very well-organized community.” Like the Tretter collection and Van Cleve’s book, the Quatrefoil Library itself is a physical testament to that organization and sense of memory.

For a work to be included in the library, it must have an LGBT author or have at least 10 percent of the material reference the LGBT experience in one way or another. That encompasses a really wide spectrum of cultural activity, obviously, so even taking a cursory glance at the holdings, you can find everything from LPs, children’s books, textbooks, archival collections of pinback buttons, oversized coffee table art books about Warhol and Avedon (not gay himself, but noted for portraits of gay subjects, including a famous one of Allen Ginsberg and Peter Orlovsky in an embrace). That also includes a panoply of porn – a whole shelf of it on DVD, facing away from the front entrance and only available to adults. This facet of the collection is something that’s been a somewhat contentious issue internally over the years, though the library has always made it available – it is a part of the LGBT experience. (For a complete history of the collection, there’s an excellent e-book by Adam Kein available on the website.)

It’s that comprehensive, all-embracing aspect of the collection that makes it so fascinating and so vital. One of the founding tenets was that there be “no censorship.” If it’s relevant to the LGBT experience in some way, it’s in. Aside from even considerations of inclusiveness and censorship, browsing the collection turns up surprises in every aisle. Poet Greg Hewett, who was recently a writer-in-residence at the library through Coffee House Press’ In the Stacks program, makes note of his surprise upon finding a copy a 1963 Helen Gurley Brown knockoff called “Sex and the Single Man.” Why would that be in there? Well, explains Hewett, “it has a chapter devoted to avoiding homosexuality. Still, I’m glad it’s there as an artifact of sexology and psychology of a bygone era.” All of the materials, when taken as a whole, present a diverse, multifaceted, complex set of cultures, sometimes in alignment with one another, and sometimes at odds.

My first impulse in any library is to find the archival, bound periodicals, and the selection at Quatrefoil doesn’t disappoint. There are full runs of Twin Cities gay-themed publications of the 1970s, ’80s and ’90s, such as Positively Gay, Equal Time, the GLC Voice, and Twin Cities Gaze, as well as selections of peer publications from other cities, such as Milwaukee’s Amazon or Vancouver’s Angles. Paging through Equal Time or Positively Gay is an interesting and somewhat sobering glance at the thriving but still quite limited parameters of local LGBT culture in an earlier era: printed on the sidebars and full-page spreads in black-and-white photos, text blocks and line drawings are ads for the retailers, bars, clubs, social services, organizations and other commercial establishments that constituted the safe spaces of those times for a marginalized and oppressed minority.

In particular, I find a small, one-fold satin-gloss pamphlet called “Marketplace” – only four issues in 1980 – interesting for these reasons. It’s a guide to gay-friendly commercial resources in the Twin Cities, probably printed in a very small run and almost certainly limited in its availability. The cover of the first issue is a sensitively rendered drawing of a young man, available through a local portrait artist’s gallery. It’s also decorated with a lambda, the Greek letter that was a popular, pre-rainbow flag symbol of gay activism in the 1970s. There’s such an idealism in the necessity of such an undertaking – a listings of businesses for “US,” it reads – but also in the fact that this tiny facet of the local gay culture was preserved and is now available to anyone who’d like to look at it.

Not every city in America had a “Marketplace” in the post-Stonewall years, as limited as it may have been in its long-term prospects. Equally important is the fact that not very city would have that heritage so carefully preserved. The fact that you see that, and then check out a book on the cultural history of disco in America – which I did, after I signed up for a membership – makes it all the better.