Arts & Culture
Arts Arena
This content is made possible in part by the generous sponsorship support of The University of Minnesota.
Feb. 23, 2009 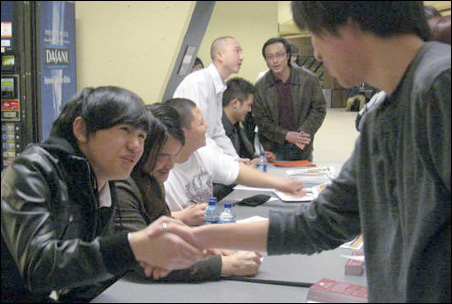 MinnPost photo by Roxane Battle
Bee Vang, left, greets attendees after a panel on “Gran Torino” at the U of M.

Bee Vang approached his co-starring role in the movie “Gran Torino” the same way he prepares for his pre-med exams at the University of Minnesota.

“I studied the script like it was a textbook,” the Minnesota native told several hundred people attending a panel discussion with the film’s Hmong cast members Friday (Feb. 20) at the U of M.

Vang, 17, plays Thao Vang Lor, a mild-mannered Hmong teenager who as part of a gang initiation tries to steal the prized 1972 Gran Torino of his next-door neighbor, a surly Korean War veteran played by Clint Eastwood.

The movie was filmed in Detroit and written by Minnesota screenwriterNick Schenk. (Watch the official movie trailer here.)

“Going onto the set was like taking an exam,” said Bee Vang. “After my first scene with Clint he didn’t talk. And I was like, ‘did I do something wrong? But everyone on the set said that if Clint doesn’t talk to you, that’s a good thing.”

Working with a legend
Several of the film’s Hmong cast members, along with a production assistant and a translator, talked about their experiences on and off the movie set, which ranged from spending hours in the makeup chair to singing Karaoke and sending out for KFC between shoots.

As expected, most of the audience wanted to know what it was like to work with a Hollywood legend.

“Just surrounding yourself with someone so wise that you’re afraid to approach him,” said 22-year-old Doua Moua, the only experienced actor among the cast of first-time Hmong actors and unknowns.

“Clint (who also directed the film) doesn’t say ‘action’ at all. It’s like the camera is on and you just go,” said Doua Moua who played a Hmong gang leader. He got a huge laugh from the audience when he mimicked Eastwood’s well-known gritty delivery, as he recounted how the “Dirty Harry” star showed him how to hold a gun.

“He said, ‘‘hold it straight and hold it firm.’ It was one of the best moments of my life.”

Cultural inaccuracies
At 78, Eastwood is in real life the same age as the fictional Walt Kowalski, a character who grimaces and growls and spews out profanity-laced racial slurs throughout the movie. Some attendees were curious if any of the Hmong actors ever took it personally.

“The slurs didn’t bother me as much because we were acting,” said Ahney Her, a 16-year-old from Lansing, Mich., who got a lot of screen time as Thao’s older sister, Sue.

Bee Vang had a different take.

“I was called so many names that I can’t say here because of how vulgar they were. It disturbed me quite a lot, but at the end of the day it was just a script,” he said.

The young actors also agreed with a number of Hmong audience members who thought the film was filled with racial stereotypes and glaring inaccuracies about Hmong culture.

For example, is it OK in Hmong culture to touch someone on the head? Yes. Is it customary to wear traditional Hmong clothing to funerals? No.

Nearly all of the Hmong cast members said they tried to address the inaccuracies during the filming of the movie, but production assistant Cedric Lee, who also served as a cultural consultant on the film, took it firmly on the chin.

“Some things were over-exaggerated for dramatic purposes,” Lee said. “Whether it was our job or not, I still felt some responsibility to speak our mind and say something, but at the same time, the script was what it was. We didn’t make the final decision.”

Rutgers University professor Louisa Shein, an expert on Hmong studies, adeptly moderated the discussion and challenged the audience to view the young cast members for what they were: actors in a film, and not so much representatives of an entire culture.

Aspiring actors or moral agents: Hmong panelists look back at their roles in ‘Gran Torino’