The latest round of talks between St. Paul Chamber Orchestra musicians and management ended badly Thursday afternoon. After hearing that the musicians would be releasing a statement around 5 p.m., then that they wouldn’t, we received an email from SPCO President Dobson West shortly after 5:30 p.m. announcing the cancellation of concerts through March 23, clear-cutting another two months of the 2012-13 season calendar. “In late December,” West wrote, “we agreed to begin a period of off-the-record discussions with the Musicians and their Union, including agreement not to publicly disclose what transpired during these discussions…. Unfortunately, the Union has terminated these off-the-record discussions.”

The musicians issued a response shortly before 8 p.m. “We had hoped that the mutually agreed upon media blackout and negotiating in private would result in significant progress that would have permitted the balance of the 2012-13 season to be presented. Since that has not happened, we decided to end the off-the-record negotiations and the media blackout.” The musicians of the SPCO have been locked out since Oct. 21. The previous round of cancellations extended through Feb. 8. In his statement, West said that “if we are able to reach an agreement within a timeframe that reinstate some of these concerts, we will make every effort to do so.” Meanwhile, the musicians will perform two previously scheduled concerts on their own, in Mahtomedi on Jan. 24 and Minneapolis on Jan. 25. FMI and tickets.

Now that Minneapolis Mayor R.T. Rybak has decided he won’t run again, we’re already thinking about things we’ll miss. High on our list: hizzoner’s enthusiasm for the arts. Not only does he crowd-surf at concerts, he shows up at all kinds of arts events. And sometimes he just gives a big hurrah from the mayor’s office. Earlier this week on Facebook, Rybak proclaimed Tuesday “one of the top 10 days in Minnesota music history” because concerts were announced that day for Prince (three nights at the Dakota), Trampled by Turtles, and Brother Ali, and because Replacements vinyls went on sale to benefit Slim Dunlap’s recovery.

Slim Dunlap, the Replacements’ guitarist from 1987-1991, had a massive stroke in February of last year. “Songs for Slim,” the 10″ EP by the Replacements, is the first in a series of recordings being made to raise money for Dunlap. The 250 copies are up for auction now; the auction ends next Friday, Jan. 25. Read more about the Songs for Slim project here, Brad Zellar’s recent interview with Dunlap here.

No, this writer is not attending the Prince concerts, although she may shoot herself later. The Strib, the Current, and City Pages are providing thorough and occasionally breathless coverage but no photos; cameras are forbidden and cell phones are being collected at the door.

While others were digging His Purpleness on Wednesday, we were at the Guthrie, mostly loving Shakespeare’s “As You Like It.”  The fifth collaboration between the Guthrie and New York’s The Acting Company is fast-paced, high-energy, imaginative and engaging. You barely notice it’s five acts of 400-year-old language (forsooth!). The costumes are mostly 20th century, with hints of flapper, and the sets are moving pieces: a wall, trees, and Victrolas on wheels that usually function as music-makers but sometimes as sheep. (You’ll get it when you see it.) The actors, who include several University of Minnesota/Guthrie Theater B.F.A. Actor Training Program alums (among them the two female leads, Elizabeth Stahlmann as Rosalind/Ganymede and Megan Bartle as Celia/Aliena), have the play down cold, and everyone takes on more than one role. 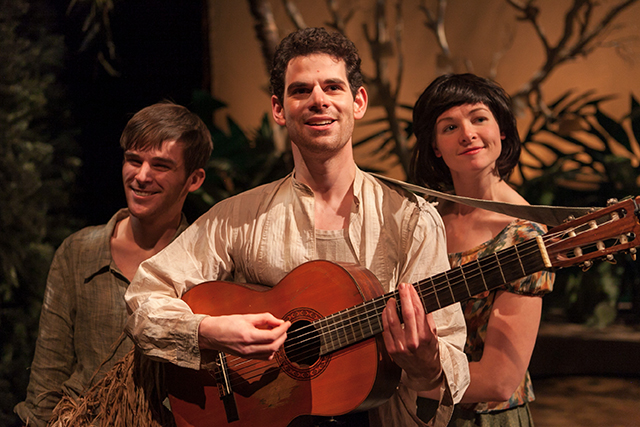 Photo by Heidi BohnenkampMichael McDonald, Noah Putterman and Kelsey Landon in William Shakespeare’s “As You Like It.”

Arden Forest, where most of the action occurs, is alive with animals: actors in fantastic masks that evoke Maurice Sendak’s “Wild Things,” which director Dan Rothenberg cites as an influence. The Victrolas get annoying early on – too much attention is lavished on them – but the music is delightful. The play itself is a silly romp with scads of characters, a zillion famous lines and phrases (“All the world’s a stage,” “motley fool,” “laid on with a trowel,” “forever and a day,” “and thereby hangs a tale”) and plot threads that come together at the end in a big, happy bow. Wednesday’s opening-night audience laughed loudly and often, and there were no dead spots. This is Shakespeare you could take a surly teenager to. In the Dowling Studio through Feb. 3. FMI and tickets.

Minnesota’s Jim Brunzell is in Park City, Utah, covering the Sundance Film Festival for the Daily Planet. “You never know what surprises will be discovered,” he writes. “This time last year, ‘Beasts of the Southern Wild’ was barely on my radar.” Brunzell lists five Sundance screenings with Minnesota connections: the feature films “I Used to Be Darker” (producer Steve Holmgren) and “The Inevitable Defeat of Mister and Pete” (screenwriter Michael Starbury), and three shorts by Hisham Bizri, Chris Mars (formerly of the Replacements), and Tom Schroeder.

Minnesota will be represented at this year’s National Book Critics Circle Awards. Laurie Hertzel reports that two books from Graywolf Press are finalists: Kevin Young’s “The Grey Album: On the Blackness of Blackness” in criticism and D.A. Powell’s “Useless Landscape, or A Guide for Boys” in poetry. A Graywolf book, Geoff Dyer’s “Otherwise Known as the Human Condition,” won last year’s criticism award. The winners will be announced Feb. 28.

Itching to write a book of your own, or make a spoken-word poetry CD? Applications for the 2013 Loft Minnesota Emerging Writers’ Grant are now open. Winners will receive up to $10,000 to support projects of their own design. Applicants must be emerging artists; if you have published more than two books or have professionally produced more than two CDs, please don’t apply. Guidelines here. Application deadline: midnight on March 27. Need more info? Attend a reading by the winners of the 2012 grants on Tuesday, Feb. 5 and/or an information session by Loft program director Jerod Santek on Jan. 23 (Twin Cities), Feb. 16 (Duluth), or Feb. 23 (Rochester). You can also schedule a one-on-one consultation with Santek. Details in the guidelines. 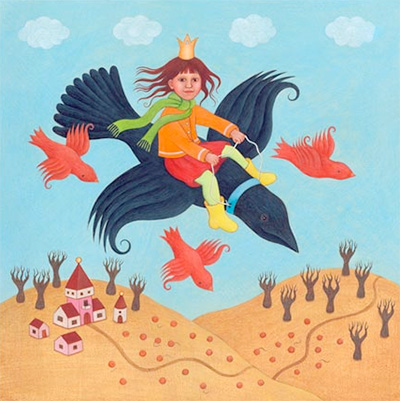 Minnesota artist Marie Olofsdotter has been chosen to create the 2013 Minnesota State Fair Commemorative Art. We know much of her work – beautifully drawn and richly colored, multicultural, imaginative, dreamy – and we’re super excited to see what she’ll do for the Fair. Born and raised in Sweden, Olofsdotter moved to the US in 1981 and now lives along the Mississippi River. She has written and illustrated several picture books and won many awards, including most recently a Minnesota State Arts Board Artist Initiative Grant in visual arts.

Writers and other artists, the deadline for Community Supported Art (CSA) submissions has been extended until Sunday, Jan. 20. Who wants to build relationships with local collectors and art lovers?

On the sad news front: after nearly a century, the College of Visual Arts in St. Paul will close its doors on June 30, the end of the spring semester. CVA president Ann Ledy cites “declining federal and state financial aid support and the challenges surrounding private loans” as reasons for falling enrollment and the widening gap between operating costs and students’ ability to pay. Students will have the option to transfer to other like institutions including the Minneapolis College of Art and Design (MCAD), whose president, Jay Coogan, says that “MCAD stands ready to assist CVA students in finishing their educations and launching their creative careers.” CVA was founded in 1924 and became a four-year institution in 1996 offering BFA degrees in fine arts, graphic design, illustration, photography and fashion design. It achieved national accreditation in 2011, a milestone that now seems bittersweet. About 170 students currently attend the school, which is housed in a mansion on Summit Ave.

• Tonight at the Minneapolis Photo Center: opening reception for two new exhibits. “Picture This: What We Photograph” stresses the narrative content of pictures – the stories they tell. “Jennifer Bong: Love, Light and Beauty” is a collection of floral portraits. 7 p.m. – 10 p.m. FMI.

• Tonight and tomorrow night at the Walker: “She She Pop.” The German performance collective deconstructs “King Lear,” with help from their real-life septuagenarian fathers. Part of the Walker’s 25th annual “Out There” series, a month-long festival of the unexpected. In German with English supertitles. FMI and tickets.

• Tonight through Feb. 7 at the St. Anthony Main Theatre in Minneapolis: the Film Society launches a new series, “Frozen Docs.” As if we need reminding that it’s c-c-cold outside. The films – all acclaimed and awarded documentaries – include Sundance winner “The House I Love In,” an eye-opening look at America’s never-ending, costly war on drugs; “Tchoupitoulas,” which follows three adolescent brothers through a night in New Orleans; and, in case you missed it at the Trylon, “Beware of Mr. Baker,” about the legendary rock drummer Mr. Baker, a man you don’t want your daughter to marry. FMI and tickets. 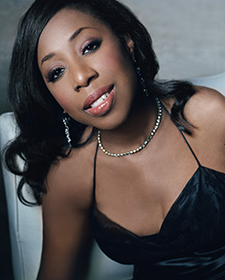 Courtesy of the University of MinnesotaOleta Adams

• Saturday night at the Hopkins Center for the Arts: Aaron Neville solo. Will the angel-voiced, Grammy-winning gospel, R&B and country star sing “Amazing Grace”? You can probably bet a beignet or two on that happening, and you’ll be transported. It’s a rare treat to hear Neville with just a pianist. 8 p.m. FMI and tickets.

• Sunday at the Ted Mann: 32nd Annual Martin Luther King Jr. Tribute Featuring Oleta Adams. Platinum-selling singer Adams has toured with Tears for Fears, Phil Collins, Michael Bolton and Luther Vandross. The tribute will also include performances by Walker West Music Academy’s Jazz Ensemble and U of M alum Ahmad Lewis, who will present a spoken-word piece called “Out of the Ashes of the Past.” 4 p.m. to 6 p.m., Ted Mann Concert Hall, 2128 4th St. South, Minneapolis.