Osmo Vänskä has resigned as music director of the Minnesota Orchestra, effective immediately. Here is the complete text of a press statement issued early this morning:

Today I have given notice of my resignation as Music Director and Conductor for the Minnesota Orchestra Association, effective 1 October 2013.

It is a very sad day for me. Over ten years ago I was honoured to be invited to take up this position. I moved from Finland to the Twin Cities. At that time I made clear my belief that the Minnesota Orchestra could become one of the very greatest international ensembles. During the intervening years I have had the privilege of seeing that belief vindicated through the skill, hard work and commitment of this wonderful group of players and with the valued support of the Board of Directors, management and administration team, volunteers, as well as our exceptional community.

I send my deepest thanks to everyone involved for what we have achieved together and I wish the Minnesota Orchestra all the very best for its future.

By Monday afternoon, Vänskä’s resignation seemed inevitable. It was a day filled with briefings, updates, statements, hastily arranged meetings and attorneys flying in. On Saturday the musicians had rejected management’s fourth contract proposal; on Monday they tendered two of their own, and both were nixed by management. Neither came anywhere near the pay cuts management has insisted on from the start of the labor dispute last year.

Management responded swiftly by canceling both November Carnegie Hall concerts, something Vänskä had said late this spring would compel his resignation. Musicians’ spokesman Blois Olson said, “They have chosen to drive the car that is the Minnesota Orchestra over the cliff.”

The musicians issued a statement shortly after Vänskä announced his resignation:

The Musicians of the Minnesota Orchestra are deeply saddened by the resignation of our beloved Maestro Osmo Vanska. Through his tenure, he has led the orchestra to remarkable musical heights. We enjoyed a truly rare chemistry with him and are deeply grateful to Osmo for imparting his passionate vision, exacting discipline, and the resulting confidence that came from being at the top of our game.

A note from Vänskä’s management company said he would not be making further comments or giving interviews at this time.

Update: Later in the day, Pulitzer Prize-winning composer Aaron Jay Kernis resigned as director of the Minnesota Orchestra’s Composer Institute. In his letter of resignation he wrote:

I admit total bafflement and dismay at what has been done to allow the dismemberment of this superb orchestra at the height of its powers. The tactics of a lock-out have no place in the life of any artistic organization. The artistic and economic flourishing of a community of musicians cannot be ensured by essentially destroying it, nor by avoiding significant compromise on both sides. …

The SPCO’s Kyu-Young Kim was mentioned in last Friday’s New York Times article about orchestras hiring performers as executives, “part of a budding trend that has been greeted with hope throughout the orchestra world.” Maybe putting people in charge who know and understand musicians can help to prevent the labor disputes now plaguing orchestras (and their audiences). Kim, the SPCO’s principal second violinist, became its senior director of artistic planning earlier this year. The SPCO seems to like the idea of moving musicians into the front offices; former co-principal second violin Tom Kornacker had retired when he was lured back for a position as special assistant to SPCO president Bruce Coppock (who is himself a former professional cellist). The Times’ James Oestreich continued to cover the Minnesota Orchestra story at the paper’s Arts Beat blog. Courtesy of the University of Minnesota
Robert Bly

The oracular Robert Bly will read from his latest poetry collection, “Stealing Sugar from the Castle: Selected and New Poems, 1950-2013,” in Willey Hall at the University of Minnesota on Wednesday, Oct. 16. Featuring very early, previously unpublished poems, selections from “Silence in the Snowy Fields” (1962), Bly’s National Book Award-winning “The Light Around the Body” (1967), and other books up to and including “Talking Into the Ear of a Donkey” (2011), this new volume should be required reading for all Minnesotans and anyone who enjoys poetry. Bly is Minnesota’s first poet laureate, but his vision and reach are global; his poetry is profound and often deeply spiritual, but it’s also direct and clear; this is not poetry that makes you go “huh?” He’s not a young man anymore – he turns 87 this December – and those of us who care about such things as poetry ought to see him whenever we can. 7 p.m., with reception following. 225 19th Ave. S. on the U of M’s East Bank campus. Free and open to the public; reservations are requested.

The announcement was made when we were on vacation, and you’ve probably already heard, but the Minnesota Opera’s commission of “The Shining,” a new opera based on Stephen King’s novel, is so exciting we can hardly stand it. What’s not to love about an opera with colorful characters, paranormal activity, madness and horror? Paul Moravec will write the score, Mark Campbell the libretto (Campbell was the librettist for the Minnesota Opera’s Pulitzer Prize-winning “Silent Night” and penned the upcoming premiere of “The Manchurian Candidate”). Do we really have to wait until May 2016 for the world premiere? Redrum! Photo by Laurence Labat
Cirque du Soleil’s “Amaluna” is a dazzling entertainment and a beguiling tale.

Cirque du Soleil’s “Amaluna” is a dazzling entertainment and a beguiling tale. Loosely based on Shakespeare’s “The Tempest,” it features an international cast of mostly women; Prospero has become Queen Prospera, the island is populated by Amazons and Valkyries, a Moon Goddess oversees the action, and the story tells of Miranda’s coming-of-age and growing love for her shipwrecked suitor, Romeo. Within this frame are the death-defying, hold-your-breath acts that Cirque is famous for: acrobats, gymnasts, jugglers, aerialists, dancers, a man who climbs a pole as casually as if he’s walking down the street, and a woman who balances long palm-leaf ribs that look like bones, creating an immense and perilous structure to the sounds of her own labored breathing. (What we thought would be the most boring act turned out to be the most fascinating. The sold-out crowd was totally silent as she picked up each rib with her feet, lifted it, and fit it in among the others in slow motion.) The all-women live band appears to have taken its costuming cues from Prince, and the clowns are racy. Cirque itself is an amazing story; founded in Montreal in 1984 by two former street performers, it nearly went under more than once before becoming the world’s largest theatrical producer, with multiple resident shows and thousands of employees. “Amaluna” is in Cirque’s enormous striped tent (“Grand Chapiteau”) at the Mall of America through Oct. 20. Here’s the official trailer. Tickets here; look around for special offers. (Example: get $10 off on tickets when you spend $25 at a Lunds or Byerly’s.) Tonight (Tuesday, Oct. 1): “Good Ol’ Freda” at the St. Anthony Main Theatre. Imagine that you’re a shy teenager hired to work for a local band. Your name is Freda Kelly; theirs are John, Paul, George and Ringo. Made with the support of the living Beatles, featuring original Beatles music, this Kickstarter-supported docu is an insider’s look at history’s greatest band. (The Beatles were together for 10 years; Freda worked for them for 11.) 115 SE Main St., Minneapolis. FMI, times and tickets here.

Wednesday: Jonathan Biss at the Ordway. The Schubert Club opens its 2013-14 International Artist Series – the annual parade of classical music superstars in intimate recitals – with the young American pianist Jonathan Biss, winner of the Leonard Bernstein Award. He’ll play a program of music by Brahms, Janacek, Beethoven (“Waldstein”), and Schumann. Here he is, playing a little Beethoven for NPR last year. 7:30 p.m., 345 Washington St., St. Paul. FMI and tickets. Arrive early (6:45) for a pre-concert talk in the foyer – new this year.

Wednesday: “Audubon and the Art of Birds” opening preview reception at the Bell Museum. Birds, birds and more birds, including restored, hand-colored engravings from a double-elephant folio edition of John James Audubon’s “Birds of America,” one of the Bell’s most valuable treasures and (many believe) the greatest book of printed engravings ever produced. (What’s a double-elephant folio, you ask? Good question. We looked it up. “Double elephant” was the largest paper size available when “Birds of America” was printed – about 25″ x 38″.) The Bell is displaying prints from this publication with ornithological art from the Renaissance to the present day. Doors at 5 p.m, program at 6:30. At the corner of University Ave. and 17th Ave. SE on the U of M campus. FMI and tickets ($10-$15). The exhibition officially opens Friday, Oct. 5, and runs through June 8, 2014. Photo by Jimmy Katz
Wednesday and Thursday: Gary Burton Quartet at the Dakota.

Wednesday and Thursday: Gary Burton Quartet at the Dakota. The master vibes player, bandleader, musicians’ mentor, educator and newlywed is celebrating his 70th year with a new album (the marvelous “Guided Tour”), a new book (his eminently readable autobiography, “Learning to Listen”), and a tour with his excellent quartet featuring Julian Lage on guitar, Scott Colley on bass and Antonio Sanchez on drums. This will be very, very good, and beautiful besides. 7 and 9 p.m., 1010 Nicollet Mall. FMI and tickets ($30-$42). Read a Q&A with Burton here.

Wednesday through Sunday: Minneapolis Underground Film Festival at the St. Anthony Main Theatre. Now in its sixth year, hosted and sponsored by the Film Society of Minneapolis-St. Paul, MUFF features Minnesota-made, national and international films, post-show Q&As, and an after-party at the Red Stag. The opening night film, “Connected,” was shot and produced entirely in the Twin Cities metro area and stars many local film and theater actors. Completed last summer, it is already winning awards and raves. Writer, director and co-editor Dave Ash leads a double life: corporate dude by day, filmmaker on evenings and weekends, and parent of four. (Make that a triple life.) FMI and tickets. 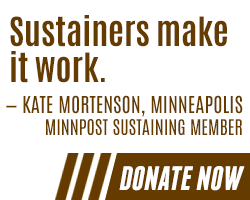 Thursday: Murder at the Museum. A body is found at the Science Museum of Minnesota late at night, and all signs point to foul play. Can you gather the clues and solve the crime? Forensic scientists will help you learn to dust for fingerprints, interpret blood spatter and more. Sounds like fun. Upstairs on the 6th floor, local authors including Erin Hart, Joe Kimball and Julie Kramer will read from and discuss their favorite crime stories (presented by Once Upon a Crime). 6 – 11 p.m., 120 Kellogg Blvd. W., St. Paul. You must present a valid 21+ ID. FMI and tickets ($20-$25; call 651-221-9444 or 800-221-9444).

Thursday: Kneebody at the Artists’ Quarter. Free bop meets hip-hop, indie rock and postminimalism in the music of Kneebody, which draws from influences as diverse as Miles Davis, D’Angelo, Elliott Smith and Radiohead. Take what might be your once-in-a-lifetime chance to see them at the AQ. Ben Wendel, Adam Benjamin, Kaveh Rastegar, Shane Endsley and Nate Wood, with special guest Dave King. 9 p.m., 408 St. Peter St., St. Paul, in the basement of the historic Hamm Bldg. $15 at the door.