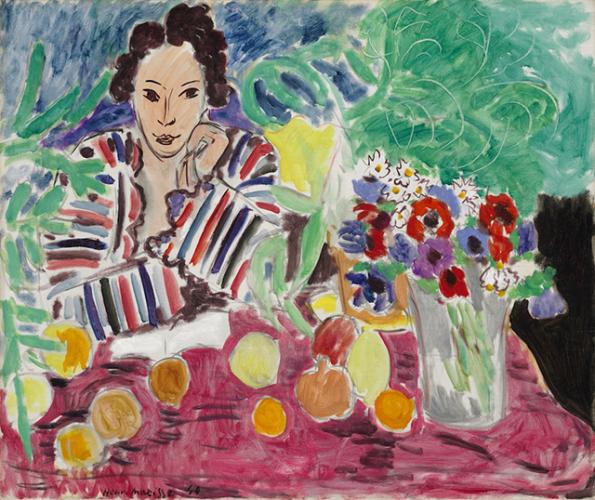 The Minneapolis Institute of Arts’ blockbuster show of the year opened Sunday, and it’s worth going soon – this minute, if you can – to bask in the warmth of Henri Matisse’s palette, the sheer sensuous pleasure of so much color and light, to enter a world where women loll around wearing brightly striped robes or harem pants or nothing at all. Today Matisse’s art seems normal, almost commonplace because we’ve seen it on posters and coasters, mouse pads and mugs. But in the first part of the 20th century, when it was snapped up, fresh from his brushes, by two wealthy, art-loving Baltimore sisters named Claribel and Etta Cone, it was considered shocking and wild. The Cone Sisters amassed a huge private collection of works by Matisse, then bequeathed it to the Baltimore Museum of Art, which overnight became the world’s major Matisse destination. While the BMA undergoes a $28 million renovation, the core of its Matisse holdings is out on tour.

“Matisse: Masterworks from The Baltimore Museum of Art” is a once-in-a-lifetime, career-spanning show of paintings, lithographs, prints and a surprising number of sculptures. It begins with student work and ends with “Jazz,” the cut-paper artist’s book from 1947 that, like the music, is about rhythm and improvisation. The MIA has its own impressive Matisse collection, and some of the works in this show (including “Jazz”) are drawn from that. If you go (when you go), be sure to spend time with “Large Reclining Nude” and the 22 fascinating photos Matisse took (and later sent to the Cone sisters), documenting his creative process over several months in 1935. You can almost hear him thinking out loud: “Long torso or shorter torso? Big breasts or small? This face or that one? Crossed legs or not? And what to do with that vase of flowers?” Through May 18. FMI and tickets ($16 weekdays, $20 weekends, free for MIA members).

After seeing the Matisse show, you’ll wish you lived in the south of France. After seeing the new play at the Pillsbury House Theatre, you may wish you lived on a different planet, someplace where things are simpler. “Gidion’s Knot,” the twisted, disturbing play by Johanna Adams that opened Friday, asks us to unravel a tragedy and make sense of the senseless. The scene is a fifth-grade public school classroom in a Chicago suburb; the time is the present; the characters – just two – are a teacher and a grieving parent. Over 90 minutes of a parent-teacher conference that wasn’t supposed to happen because (spoiler here, but you learn this early in the play) the student is dead, they wrestle with unanswerable questions about responsibility, culpability, creativity and the consequences of fear. We’re left wondering – have schools gone too far? Can we reasonably expect kids to self-censor and always exercise good judgment? What if Edgar Allan Poe or Lemony Snicket, Neal Gaiman or Stephen King had been a student in Ms. Clark’s class? These are not issues that will go away anytime soon; in the news now is an Elk River student whose two-word tweet about “making out” with a teacher came close to derailing his life. Laura Esping and Aditi Kapil are two strong actors in difficult roles; Kapil is also a playwright whose “Displaced Hindu Gods Trilogy” was presented at Mixed Blood last fall. Noël Raymond directs. Through March 23. FMI and tickets (all pick-your-price). 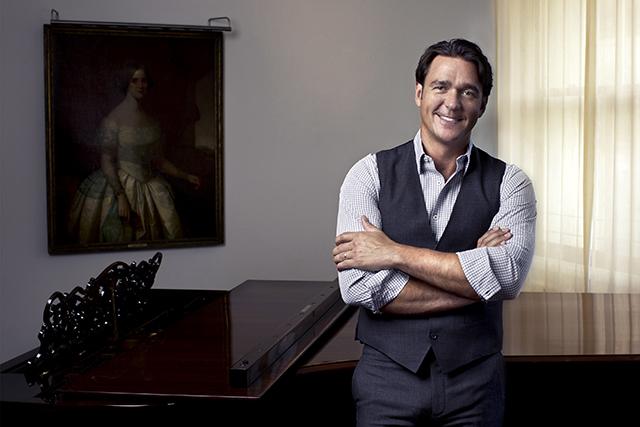 The Schubert Club announced its 2014-15 season on Sunday, and as we’ve come to expect from the venerable St. Paul presenter, it’s top-notch. The International Artist Series, the crown jewel of recital series in the Twin Cities, begins Sept. 30 with husband-and-wife duo Nathan Gunn, baritone, and Julie Jordan Gunn, piano. On Nov. 11, revered pianist Richard Goode returns after an 11-year absence from the Ordway’s stage. On Feb. 24, 2015, young British pianist Benjamin Grosvener makes his International Artist Series debut. On April 15, the enchanting violinist Hilary Hahn – most recently seen at Aria in Minneapolis for the Club’s new concert series, Schubert Club Mix – comes back to the Ordway. On May 19, mezzo-soprano Joyce DiDonato, a 2012 Grammy winner, makes her International Artist Series debut with pianist David Zobel. For the new Music in the Park series at Saint Anthony Park United Church of Christ, the Schubert Club has booked the Danish String Quarter (Oct. 12), the Miami String Quartet with pianist Lydia Artymiw (Oct. 26), Ensemble Caprice (Nov. 23), the Schubert Ensemble of London (Feb. 15), the St. Lawrence String Quartet (April 19) and the Assad Brothers guitar duo (May 10). Subscriptions are on sale now for both series, with single tickets available Aug. 4.

We’re hearing hairy tales about Orchestra Hall ticketing snafus — problems when trying to buy on the website, long waits on the phone, people going to the box office and finding locked doors. We asked David Sailer-Haugland, the MOA’s director of marketing for subscription sales, and orchestra spokesperson Gwen Pappas to explain why buyers are having problems and what’s being done to make things run more smoothly.

The website didn’t crash; it was timing out during the communication between the ticketing company and the company that handles the credit-card security. “That was discouraging,” Sailer-Haugland said, “but it has been fixed for a couple of weeks now. We were on it right away.” Phone waits were averaging 20-30 minutes — too long. But these are unusual times. The 15-month lockout ended Jan. 14, and the 2014 season was announced Jan. 24, a scant 10 days later. Subscription packages went on sale for renewing subscribers on Jan. 27, for new subscribers Feb. 3. Individual tickets became available Feb. 9. “Our typical subscription renewal period in a normal year would span three months,” Pappas explained. “This year, the renewal period was 23 days. Typically, we’re through subscription season before single tickets go on sale. Right now, that’s happening simultaneously, resulting in tremendous volume.” In three weeks, Orchestra Hall sold 70,000 tickets, or $2 million. Phone wait times were improving and subscription concerts were about to start when last week’s storm rolled in.

The box office at Orchestra Hall is no longer open during regular business hours. Is that a factor? Not really, Sailer-Haugland said. “The vast majority of people – 90 percent – buy tickets online or on the phone.” And the other 10 percent? “Eight percent of those buy tickets the day of the show.” Still, “there are plans to open an on-site box office at the hall this spring, when we’re fully staffed and operational.” Drive-ups and walk-ups will be able to buy tickets at the stage door “by May at the latest.”

“We’re on the tail end of getting the next wave of phone reps into the mix,” Sailer-Haugland said. “The combination of more work force coming in, and the conclusion of the subscription campaign during the next week, means that everything will be back to normal in March at a level people were used to.”

Our two favorite arts-related stories from the past several days: (1) President Obama has appointed Dr. Jane Chu, president and CEO of Kansas City’s Kauffman Center for the Performing Arts, to head the NEA. Music blogger Norman Lebrecht describes the Kauffman as “outstandingly bold and successful.” Now if only Congress will confirm her. It’s been 14 months since former NEA head Rocco Landesman announced he would step down early. We still miss Dana Gioia, a poet and jazz fan who ran the NEA from 2002-2009. Landesman was the guy who once declared during a theater conference that the U.S. had too many arts organizations. (2) Heads up and all aboard, writers: Amtrak has begun offering writers’ residencies on trains. Seriously. Earlier this year, New York-based writer Jessica Gross did a test run, taking a tiny sleeper cabin (even smaller than a garret) from New York to Chicago and back again. Now the company is in the planning stages of making it official and keeping it free or low-cost. You can’t apply yet, but as soon as we hear more, we’ll let you know.

Our picks for the week and the coming weekend

Artscape is taking a break this Friday, so here’s what we like for the weekend, too. We’ll be back next Tuesday.

Tonight (Tuesday, Feb. 25) at the Dakota: Terence Blanchard Quintet. If you’ve seen a Spike Lee movie, you’ve heard (some of) jazz trumpeter, composer and educator Blanchard’s music. The five-time Grammy winner is always worth going out for. Here’s Britt Robson’s article for the Strib. 7 and 9 p.m. FMI and tickets ($35-$45).

Tomorrow at the U of M’s Coffman Memorial Union: An Evening with Steve Berry. The best-selling, award-winning author of historical thrillers (“The Lincoln Myth,” “The Columbus Affair,” “The Jefferson Key”) will share his insights as a writer and his interest in history and historic preservation. 7 p.m. FMI and tickets ($15 general public, $5 students).

Thursday at the Cedar: Stanley Clarke. If you play the bass (or follow jazz), you know Clarke’s seminal 1976 album “School Days” and its anthemic title track. He’ll perform the album in its entirety, along with other material, accompanied by Ruslan Sirota on keyboards, Brady Cohen on guitar and Mike Mitchell on drums. 7:30 p.m. FMI and tickets ($35/$50).

Thursday at Magers & Quinn: Grant Hart Presents 100 Years of William S. Burroughs. Originally scheduled for Feb. 18, postponed because of the storm. 7 p.m. FMI. Free and open to the public.

Friday at Aria: Heart of the Party. It’s a political-party party. Hosted by Congressional District 5 of the DFL Party of Minnesota, this combined fundraiser/energizer/recruitment event features entertainment on two stages by Steve Clarke & The Working Stiffs (absolutely no relation to Joe the Plumber), Voice of Culture Drum and Dance, Maria Isa, Ill Chemistry (hip-hop and beat boxing with Desdamona and Carnage the Executioner), and more. Minneapolis Mayor Betsy Hodges will be there. So will Congressman Keith Ellison and Tina Smith. 7 p.m. – midnight. FMI and tickets ($30).

Friday at the Bryant Lake Bowl Theater: Kickin’ Ass and Takin’ Names: Measuring Success One Failure at a Time. Do we all have the same capacity to reach our goals, if we only work hard enough? Is it true that we must fail again and again in order to succeed? In an interactive, highly improvised solo show based on a 12-hour live-streamed web-a-thon, Seth Lepore takes on the self-help movement. Guests include Minneapolis theater stalwarts Jenny Moeller, Zach Coulter, Carl Atiya Swanson and more. Doors at 6 p.m., show at 7. Through Sunday, March 2. FMI and tickets ($14/$12). Facebook page. 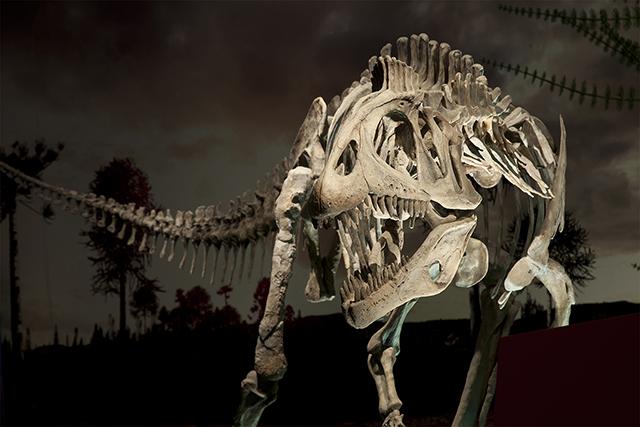 Saturday at the Science Museum: “Ultimate Dinosaurs” opens. Cryolophosaurus. Nigersaurus. Suchomimus, the spinosaur. Giganotosaurus, perhaps the largest land predator ever. Don’t worry, we’ve never heard of any of them either. The Science Museum’s new exhibit features 20 fully-articulated dinosaur specimens that evolved in isolation in South America, Africa and Madagascar. Through Aug. 24. FMI and tickets ($9-$21).

Saturday at the Ordway: Minnesota Opera’s “Dream of Valentino” opens. Tenor James Valenti, who was recently mistaken for an NFL football player, stars as the legendary Rudolph Valentino in a revival of the 1994 opera by Pulitzer Prize winner Dominick Argento. Brenda Harris (“Macbeth”) sings the role of screenwriter June Mathis; Oscar winner Eric Simonson directs. Seduction, scandal, tango and Valenti in guyliner. This could be kind of steamy. 7:30 p.m. FMI and tickets ($20-$200). Also next Thursday-Saturday.

Monday, March 3 at the Dakota: The Manhattan Transfer. Forty years of tight harmonies, impeccable swing, a dozen Grammys, a million albums sold – and that sound! 7 and 9 p.m. FMI and tickets ($40-$50).