By now you’ve probably heard that downtown Minneapolis is getting a massive new piece of public art: a five-story mural of Minnesota’s own Bob Dylan by Brazilian muralist Eduardo Kobra. It will fill the west façade of the 15 Building at 15 South 5th St., just southeast of Hennepin Ave., visible across a parking lot from Hennepin all the way down 5th to Target Field.

If you drive, walk, bus or bike downtown or use light rail, you can watch it take shape over the next two weeks.

The 15 Building is owned by R2 Companies and AIMS Real Estate, a business unit of Goldman Sachs Asset Management.

“When we first bought the building, we said, ‘We’ve got to do something with this wall,’ ” R2’s Matt Garrison told us Thursday by phone from Chicago, where R2 is based. “At first we were thinking we’d put up a big sign for the building, but that just didn’t seem right because it’s so prominent, facing the North Loop and the community. We thought it was an opportunity to do something really cool.”

Mark Kuske at Goldman Sachs in New York reached out to Mary Altman, public arts administrator for the City of Minneapolis, who suggested he call Joan Vordebruggen, cultural district arts coordinator for Hennepin Theatre Trust and the mind behind “Made Here,” which has filled empty storefront windows along Hennepin Ave. with art since 2013.

Vordebruggen considers this “one of the best moments of true partnership with the city … Mark Kuske called me, I flipped out and said ‘Yes!’ ”

Hennepin Theatre Trust is now managing the project, meaning Vordebruggen is on site almost constantly, working with Kobra and his team of five artists. Three are from Brazil, two are from Minneapolis. The Brazilians speak only Portuguese, so Vordebruggen is using Google Translator.

Kuske is a fan of street art, which led to Kobra being chosen for the $50,000 commission. “We ping-ponged back and forth about several artists,” Vordebruggen said. “Then [Kuske] said, ‘What do you think about Kobra?’ I was like, ‘Yes! One hundred percent!’ I knew if we could get him here, it would be so transformative.”

Kobra began as a young street artist in a low-income São Paulo neighborhood, tagging with an older graffiti crew. Today he is internationally known for his enormous works on buildings and walls, portraits that pulse with color.

New York has a Kobra, a re-imagining of Eisenstaedt’s famous 1945 photograph “VJ Day in Times Square,” of a sailor kissing a young woman. Los Angeles has his psychedelic take on Mount Rushmore. For Art Basel in Miami, he painted rappers Tupac Shakur and the Notorious B.I.G. The city of Boras, Sweden, has Kobra’s Alfred Nobel mural; Lodz, Poland has Arthur Rubinstein. His gigantic portrait of the Russian ballerina Maya Plistetskaya leaps off a wall in Moscow.

“Kobra doesn’t just do what you tell him to do,” Vordebruggen said. “His art is rooted in storytelling, history, and things that are culturally relevant to the area. We bounced around a thousand different ideas. Then, one day – OMG, it’s gotta be Dylan! Public art has to be accessible. Dylan has broad appeal. He was recently named the best songwriter in America by Rolling Stone. Dylan is going to live on forever.”

Dylan also has connections to Hennepin Avenue. He once owned the Orpheum Theatre, which today is owned by Hennepin Theatre Trust, and he played a sold-out, three-night stand there last November.

Part of the parking lot of the 15 Building is now a work site, with ladders and boom lifts and air compressors. The formerly blank white wall is becoming a triptych of Dylan through the years. Lyrics from his song “The Times They Are A-Changin’ ” will be included in the final image. 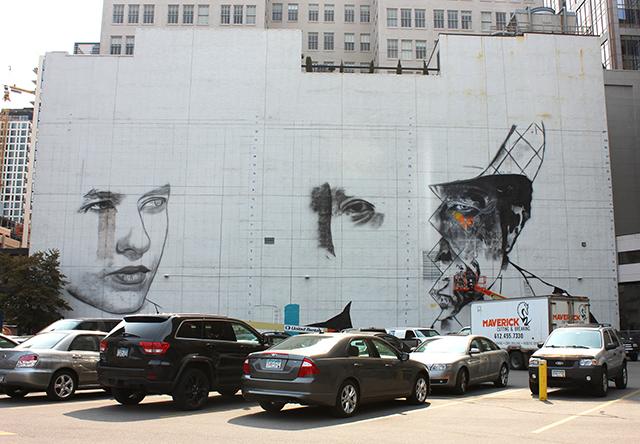 Photo by Bailey Cahlander
The formerly blank white wall is becoming a triptych of Dylan through the years.

“The mural is going to be a downtown Minneapolis icon,” Vordebruggen said. “It’s going to be like ‘Spoonbridge and Cherry.’ You’ll see it and think ‘Minneapolis.’ ”

“We’re spending some money on this mural,” Garrison said, “and we’re happy to do it. Normally, real estate investors want a direct return on investment, but this is more qualitative than quantitative. We’re doing it to help create a sense of community and excitement.”

For Garrison, it’s about generating the kind of vibrancy that attracts companies and employees to R2’s buildings. Public art and what it says about a city can be a strong draw. For Vordebruggen, it’s about vision.

“I look at this district and all I see is opportunity,” she said. “I won’t rest until it has art and culture from local artists, emerging artists, professional artists, international artists. This to me right now is a canvas, and I want to fill it up. … I want people from Tokyo to fly here because they want to see it. I want people all over the world to think, ‘We’ve got to go to Minneapolis because the city is covered in art.’ ”

Tonight (Friday, Aug. 28) through Sunday at the Trylon: “Tron.” If you’re under 30, this is more of a geological event than a film screening, but “Tron” was the first film to make use of computer-generated imagery. And it stars Jeff Bridges several years pre-Dude. Friday and Saturday, 7 and 9 p.m., Sunday 5 and 7 p.m. FMI and tickets ($8).

Closes Saturday at the Walker: “International Pop.” Last chance to see this landmark show before the Walker packs it up and ships it to Dallas. 140 works from 14 countries trace the global emergence of Pop art from the 1950s through the early 1970s. FMI. 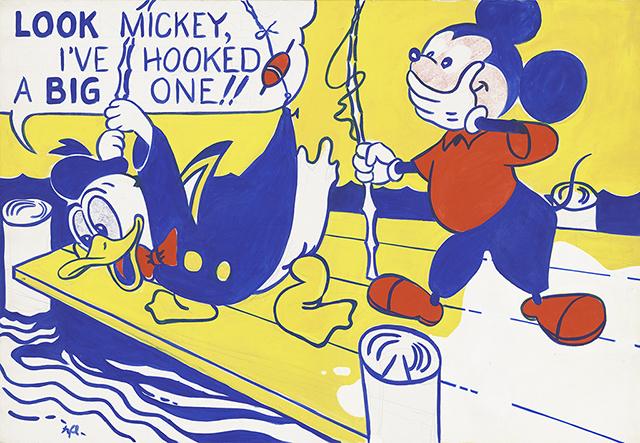 Closes Sunday at Mia: “Leonardo da Vinci, the Codex Leicester, and the Creative Mind.” You’ll see it through glass, but there it will be, for just a few more days: Bill Gates’ personal copy of one of Leonardo’s original notebooks, with his detailed illustrations and left-handed mirror writing. FMI and tickets.

Monday at the Dakota: Terrence Blanchard E Collective. Multiple Grammy-winning, New Orleans-raised jazz trumpeter Blanchard’s new album is a departure stylistically and sonically; it’s more funky than we’re used to hearing from him, with electric instead of acoustic bass, dance grooves and electronic processing. It’s also more overtly political. “Breathless” is a direct reference to Eric Garner, who died in police custody in New York City and whose last words were “I can’t breathe.” So it’s also about justice. 7 and 9 p.m. FMI and tickets ($40/$25).

Monday and Tuesday at the Fair: Sonny Knight & the Lakers. High-energy retro R&B. There will be dancing. On the International Bazaar Stage at 7:30 and 8:45 p.m. both nights. Free with admission.