Tomorrow (Friday, Sept. 18) at the Park Square Theatre: Opening night for “Elliot, A Soldier’s Fugue.” Three generations of soldiers’ stories unfold in Quiara Alegria Hudes’ poetic, touching and funny play. Elliot, a 19-year-old Marine, is home from Iraq with a purple heart. His father fought in Vietnam, his grandfather in Korea. Elliot’s mother, who was a nurse in Vietnam, holds them all together and tends her garden. “Elliot” was a Pulitzer Prize finalist in 2007. Hudes won the 2012 Pulitzer Prize for Drama for her play “Water by the Spoonful.” Robert Rosen directs; Park Square Artistic Associate Ricardo Vázquez is Elliot. 7:30 p.m. FMI and tickets ($40/$60). Through Oct. 4.

Tomorrow at the Pillsbury House Theatre: Opening night for “Prep.” Pillsbury House ends its 25th season with the world premiere of a new play by Tracey Scott Wilson, whose “Buzzer” had its sold-out world premiere at Pillsbury House in 2012 before moving to the Guthrie a year later. Directed by Noël Raymond, “Prep” exposes the trauma faced by African-American high school students navigating today’s educational system.

Tomorrow and Saturday at the Lab Theater: “Médée.” There’s a new opera company in town: the Metamorphosis Opera Theatre. Led by artistic and musical director James Barnett, MOT performs its first fully staged production this weekend, Darius Milhaud’s 1938 setting of the Greek tragedy of Medea, the jealous wife. Milhaud’s own wife, Madeleine, wrote the libretto. MOT will use a re-orchestrated score for flute, cello and piano. Two performances only, both at 7:30. FMI and tickets ($25/$5 students with valid ID). 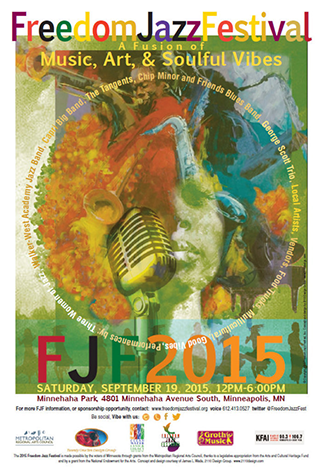 Saturday at Minnehaha Park: Freedom Jazz Festival 2015. A day of music, arts, crafts and food outdoors in one of our great city parks. This year’s lineup includes the Capri Big Band, Minneapolis Jazz Workshop, Chip Minor and Friends Blues Band, the Tangents, Walker West Youth Jazz Ensemble, the George Scott Trio, and a set by the “Three Women of Jazz”: vocalists Yolande Bruce, Linda Sloan and Debbie Duncan. For the finale, the Tangents will lead a second-line walk to the Minnehaha Falls. 4801 Minnehaha Ave. S. Noon to 6 p.m. Free.

Saturday at the Southern Theater: Arch Lights. Last year, the Southern introduced a new plan to bring the performing arts back to the historic theater at Seven Corners. ARTshare would provide a home to 15 small theater and dance groups and sell memberships to the public. The resident companies would have a place to perform, and members could see as many shows each month as they wanted. On Saturday, the Southern will announce its second ARTshare season, so something must be working.  Snack, drink, enjoy the sounds of the Twin Cities’ only Weezer cover band, and learn what the Southern has planned for fall. 7 – 11 p.m. Free, with reservations requested.