It’s time to come up with a great idea for the Knight Arts Challenge St. Paul. Year Three of the challenge opens for submissions on Monday, April 4, and you don’t have to live in St. Paul to win a share of the $1.5 million to be awarded by the Knight Foundation.

Unlike many arts funders, Knight makes applying easy-peasy. The initial application is 150 words (or fewer, but never more), with three clear and simple rules: 1) Your idea must be about the arts. 2) Your project must take place in or benefit St. Paul. 3) You must find funds to match Knight’s commitment. (Don’t worry about that at this stage. Once you start identifying yourself as a Knight Challenge Grant winner, fundraising becomes easier.)

Two community conversations will guide you through the process and answer any questions you might have. The first takes place at Rondo Library in St. Paul on Wednesday, April 20 and the second at Brian Coyle Center in Minneapolis on Thursday, April 21. Both start at 5:30 p.m. and will last about an hour. Both are free and open to all, with Knight staff and previous winners on hand to answer questions.

The application deadline is May 2. The finalists will be announced in the third week of July (date TBA) and the winners in the first week of October.

Take a look at previous Knight Arts Challenge-winning ideas here and here. Note that several are outside the box. Creative thinking is welcome and rewarded.

Just so you know, after you view the new “MN Original” you might want a painting by Leslie Barlow, a pair of shoes made by Amara Hark-Weber and Eric Mayson’s debut recording.

Visual artist Leslie Barlow uses her paintings to explore the tension between identities – within her city, Minneapolis, a great place to live and a place with some of the worst racial disparities in the country, and also within herself as a mixed-race person. That fact is most eloquently shown in a painting she made of her two grandmothers, one white, one black. “What I’m drawn to is work that makes you think and has an impact and potentially can inspire and change communities,” Barlow says. Her paintings are strong and beautiful, full of colors she mixes herself.

Someone who makes shoes is not a cobbler. He or she is a cordwainer. In Amara Hark-Weber’s case, that word translates to passionate, meticulous and proud of mastering what she calls the “focus-intensive, material-intensive, expensive and difficult” art of making shoes entirely by hand, from start to finish. Her tools include lasts (the forms shoes are based on), hammers, pincers, knives, tacks, sandpaper, rasps, awls, a sewing machine and spit. And all kinds of leather, including fish leather. Every step is important, because “once you mess up, you have to do the whole thing over.” Another thing we learned from this segment, besides the word “cordwainer,” is that most feet don’t fit properly into manufactured shoes. 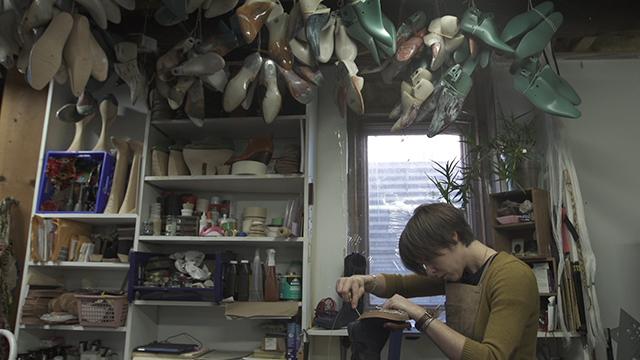 Courtesy of TPT
Amara Hark-Weber is a cordwainer.

Musician, composer, songwriter and producer Eric Mayson makes music you can move to, in part because one of his jobs is accompanist for Zenon’s dance school. He doesn’t play from a score; he improvises, exploring and enjoying what he calls the “dialogue between movers and musicians.” Often, he’ll prepare a piano – adding objects to and between the strings – to create more percussive sounds. His debut recording, “Detail,” was released last September and earned a thumbs-up from the Current. You can listen to the whole album here.

The work of the fourth artist featured is not something you hang on a wall, wear on your feet or listen to on your smartphone or in your car. Musician Chai Lee plays the qeej (pronounced “khength”), a traditional Hmong instrument made from six curving bamboo pipes. The Hmong Cultural Center of Minnesota describes it as “the primary cultural identifier for Hmong people practicing the traditional Hmong religion.” The qeej is played at funerals, where its sound is believed to lead the soul of the deceased to the afterworld. At the Cultural Center, Lee teaches other young Hmong how to play the qeej; the music is not written down but must be learned by ear and example. “Culture is everything,” Lee says. “I want to keep preserving my culture and make sure it continues on.”

All of the artists in this episode were new to us, and it’s not like we just rode into town. Props to MN Original for keeping it fresh.

Starts Friday at the Illusion Theater: 2016 Right Here Showcase. We encourage emerging artists, honor older masters and cheer those who have left Minnesota and found success elsewhere. But what about artists in mid-career who are producing great work … right here? In 2014, Paul Herwig, co-artistic director of Off-Leash Area, started the Right Here Showcase to shine a well-deserved light on exceptional artists in our midst. It’s back with four more of Minnesota’s most enduring and exciting creator-performers: dance artist Penelope Freeh, live artist and director Melissa Birch, dance artist Megan Mayer and composer and multimedia artist Craig Harris. Each has created a new work, revisited and expanded a past work or completed a current work specifically for the Showcase, which takes place over two weekends: Friday-Sunday, April 1-3 (Penelope Freeh and Melissa Birch) and Friday-Sunday, April 8-10 (Megan Mayer and Craig Harris). Performances at 7:30 and 9 p.m. Each performance lasts about an hour. Stay for both. FMI. Register for free and make a suggested donation of $10-$30 at the door (cash, check or card).

Friday and Saturday: Sigiswald Kuijken and the Bach Society of Minnesota Orchestra: Baroque Music for Strings. Belgian early music pioneer Kuijken performs and leads a program of music by Schmelzer, Corelli, Vivaldi and Bach that includes one of Bach’s cello suites performed (by Kuijken) on the recently rediscovered viola da spalla – a cello played under the chin. Friday at Hamline’s Sundin Music Hall, Saturday at Central Lutheran Church in Winona. Both 7:30 p.m. Tickets here ($22). And here’s a video of Kuijken talking about and demonstrating the beast. Pretty darned fascinating. 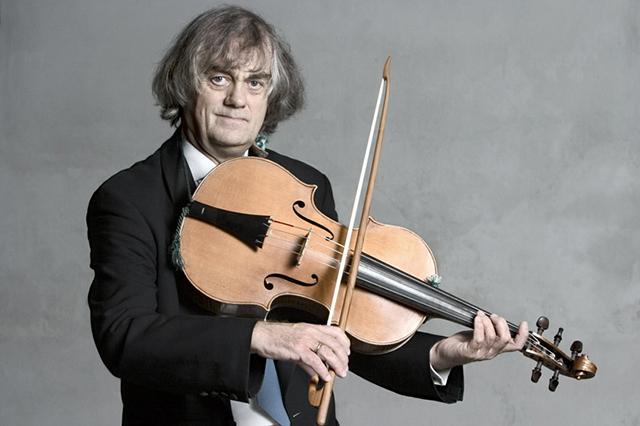 Courtesy of the artist
Sigiswald Kuijken

Friday and Saturday at Vieux Carré: Dave King Trio. King on drums, Bill Carrothers on piano and Billy Peterson on bass. Standards as you’ve never heard them before, originals, and improvisations built on rhythm. Sit close enough and you can watch them read each other’s minds. 9 p.m. FMI. $15 at the door.

Monday at Bryant-Lake Bowl Theater: The Theater of Public Policy: “Mrs. Smith Goes to St. Paul.” T2P2 launches its 10th season with Lt. Governor Tina Smith in the hot seat. Well, not that hot. They’re more about presenting serious and timely issues with wit and humor, less about roasting, shouting down and/or humiliating its guests. Actually, they’re not at all about any of those things. They’ll interview Smith, do some improv comedy based on what they learn, talk with her again and probably leave time for questions from the audience. This unusual format has worked so well that T2P2, formed by Gustavus Adolphus alums Tane Danger and Brandon Boat, is staring down its second decade. It’s smart fun and you’ll learn something. Doors at 6 p.m., show at 7. FMI and tickets ($12/$10 advance). Upcoming topics this season include affordable housing, small towns, water quality, the Sandpiper Pipeline Project and conversations with the Strib’s James Shiffer (author of “The King of Skid Row”), about Minneapolis’ Skid Row, former Minneapolis Mayor R.T. Rybak about being mayor, and Minneapolis City Council Member Abdi Warsame, currently the highest-level elected Somali American in the nation. Here’s the complete show schedule.

Tuesday at Bedlam Lowertown: Gabriel Kahane and Timo Andres. In 2011, we heard singer/songwriter Kahane perform poet Galway Kinnell’s “Little Sleep’s Head Sprouting Hair in the Moonlight” at the Southern, singing Kinnell’s words to music of his own devising. Late last year we heard Jonathan Biss and the SPCO play “The Blind Banister,” a concerto for piano and orchestra composed by Andres and inspired by Beethoven’s Piano Concerto No. 2. Their program for the Bedlam includes some Bach, world premieres of their own original compositions and a “call and response” spanning four centuries of music. We’re excited to see two acclaimed, influential and genre-bending musicians together on the same stage. 7:30 p.m. FMI and tickets ($30).