Prince dead at 57? Get out. Shut up. No way! He’s been part of the soundtrack of our lives since forever, the single consistent exception to our mostly jazz, classical and new music bent, because he was Prince. He was always up to something worth hearing. His music was forever new, even that song telling us to party like it’s 1999, which came out in 1982, and, God willing, we’ll still be grooving to years from now.

When we went to a jazz festival in Canada, we bought tickets to a Prince concert, which was kind of nuts, because he was Prince. We saw him at the old Northrop, that great barn, where he was late, and the Xcel, where he was far away, sitting alone with his guitar. Many times, when we traveled and met people and said where we were from, we ended up talking about Prince, because everyone knew he was from Minneapolis, which made us proud. So did Dylan, but Prince was … Prince. One name, one syllable, the Purple One, the one and only.

We went to an early Paisley Park show with our good friend, the music writer D.L. Mabery, who died in 1991. Miles Davis was still alive then, though not for long; he was there, just hanging out. Mavis Staples performed with Prince on the small stage, and Larry Graham.

As Prince became more accessible to fans, opening Paisley Park for dance parties as recently as last Saturday, we lived vicariously through Andrea Swensson’s articles at MPR; she went often and wrote eloquently and at length about her experiences, no small thing considering Prince didn’t let journalists make recordings or take notes.

And we read Jon Bream at the Star Tribune, long an authoritative source of news, history and critical thinking about Prince. Bream was at Saturday’s event, which took place the day after Prince’s private plane made an emergency landing in Illinois because he was dehydrated. Bream reported that Prince reassured the crowd at Paisley Park that he was OK. “Wait a few days before you waste any prayers,” he said.

Dearly beloved, you will be missed by so many, for so long and for so many reasons. Who doesn’t have a Prince story, a Prince memory, a favorite Prince song? Who isn’t thinking, right now, “What else would he have done?” There was so much music left in him, decades more. And what about those memoirs?

Before digging out our Prince vinyl and firing up the turntable, we return to the regular business of this column. But first we’re going to read (again) what Jim Walsh wrote about Prince.

‘The Shining’ is sold out

Before a “Tosca” performance at the Ordway in March, Minnesota Opera Music Director Michael Christie urged the audience to get their tickets ASAP to “The Shining,” the new opera based on the book by Stephen King.

He wasn’t kidding. Almost three weeks before the world premiere on May 7, all 7,056 seats across all four performances are sold out.

You can still do what opera fans do at the Met and great opera houses around the world: buy a standing-room ticket. You’ll be at the back of the gallery, on the top level. You’ll pay $28. Just 52 tickets are available for each performance, and they’re not offered online. Call 612-333-6669 Monday-Friday, 10 a.m. to 5 p.m.

Don’t hold out hope for added performances. The logistics are too complex and there won’t be any.

Want to see a future “C.” in its early stages? Throughout the month of May, Theater Latté Da will present public readings of three new works now in development. (“C.,” now a hit at the Ritz, was part of 2013’s NEXT festival.)

Hosted by Dan Chouinard, “The Urban Farmer’s Almanac” is a live-performance, written-for-radio variety show about raising food and living close to the ground in the city. Rothstein directs; the crop of guests includes Beth Dooley (author of “In Winter’s Kitchen” and “Minnesota’s Bounty: The Farmer’s Market Cookbook”), Michael Cheney (founder of Project Sweetie Pie), and Lucie Amundsen (co-founder of Locally Laid Egg Co. and author of “Locally Laid: How We Built a Plucky, Industry-Changing Egg Farm from Scratch”). At the Ritz Theater: 7:30 Thursday, May 12 and Saturday, May 14; 2 p.m. Sunday, May 15.

Jackson Doran and Postell Pringle have penned “The Illyria Project,” a hip-hop musical interpretation of Shakespeare’s “Twelfth Night.” (Our own “Hamilton”?) Doran and Pringle direct, Christina Ham is dramaturg and the cast includes Shinah Brashears, Ryan Colbert, Petrus and a special appearance by DJ Kool Akiem. At the Capri Theater (not the Ritz): 7:30 p.m. Thursday, May 19, Saturday, May 21 and Monday, May 23.

A preview of this week’s ‘MN Original’

From conceptual textiles to two-headed rats, Actual Wolf and the annual freshness of the Fringe Festival, this week’s “MN Original” is another kaleidoscopic look at the arts in and around the Twin Cities.

Maggie Thompson, a graduate of the Rhode Island School of Design, is “one of the most important native artists working today,” says Jill Ahlberg Yohe, assistant curator for Native American art at the Minneapolis Institute. A member of the Fond du Lac Ojibwe, Thompson grew up in Minneapolis, where kids at school asked if she lived in a teepee and nicknamed her Pocahotness. She originally went to college for architecture but fell in love with fiber; her current work, which includes wall hangings and beautiful, colorful body bags, embraces the grief she feels at her father’s death. “We are a contemporary people,” Thompson says. “People’s perception of native art, fashion and design needs to shift.” 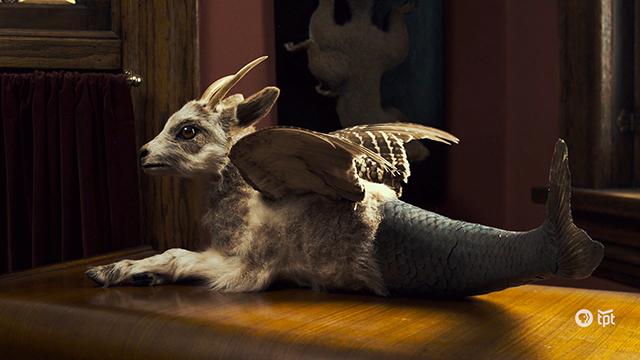 Sarina Brewer admits to having “a lot harder time getting materials for my work than probably a lot of artists.” Art supply stores don’t carry what she needs: dead squirrels, chickens, rats and snakes. Brewer is a rogue taxidermy sculptor, creating art from organic animal materials and taxidermy-related materials – for example, artificial bird heads and animal body forms, around which Brewer wraps the skins. All of her animals are ethically sourced, and she considers her work a tribute to them as she constructs hybrid creatures from imagination, many based on mythology. Her neighbors Christina and Stephen are urban chicken ranchers, and when they lose a chicken to winter or old age, they save it for her. “We give her a chicken, and all of a sudden it’s a gryphon,” Stephen says.

This year’s Minnesota Fringe Festival – one of the largest, best-run theater festivals in the U.S. – starts Aug. 4, and it’s not too soon to get jazzed about it. TPT whets the appetite with a look at last year’s Fringe preview shows (annual sneak peek events), brief interviews with performers, audience members and volunteers, and a chat with executive director Jeff D. Larson. “I really like for people to never know what to expect when they’re coming to the Fringe,” he says. We never do. For 10 days, Fringe is “a giant crazy leap” into comedy, drama, dance, music, and a category called “something different.” Don’t leave town.

Also in this episode, the 11th in the series’ seventh year: a musical interlude by Actual Wolf (Eric Pollard of Retribution Gospel Choir) and Haley Bonar, singing a song called “Oh Baby You Can’t Leave.”

Saturday at the Cedar: Community Plaza Grand Opening Celebration. The newly renovated outdoor gathering spot next to the music venue is throwing a party for all ages, with dance demos, spoken word performances, henna tattoos, live music for dancing, and free bites from neighborhood eateries. 5-7 p.m. Free, but please RSVP.

Saturday at Uptown Church: “Hell, I Love Everybody: A Celebration for James Tate.” Rain Taxi hosts a mega-party in honor of Pulitzer Prize and National Book Award winning poet James Tate, who died in 2015. Tate wrote to move us; he once told the Paris Review, “If you laughed earlier in the poem, and I bring you close to tears in the end, that’s the best.” Two dozen poets from around the country will be here for talks, readings, stories, films and song, plus a new chapbook of unpublished poems by Tate will be released. In two parts: 3-4:30 p.m. (afternoon talks and readings, with coffee reception) and 7-8:30 p.m. (evening talks and readings). Free. FMI. 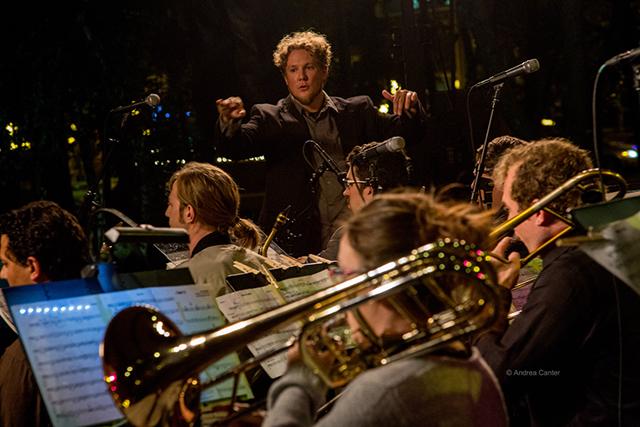 Courtesy of the artist
Adam Meckler

Saturday at Vieux Carré: Adam Meckler Quintet “Wander” CD Release. Tight, exciting, melodic music by the Twin Cities-based trumpeter-composer, performed by a fine band including Nelson Devereaux and Joe Mayo on tenor saxes, Zacc Harris on guitar, Graydon Peterson on bass and Greg Schutte on drums. All songs are Meckler originals; all are personal – people and places he cares about: family, Door County, social justice. When music is real and true, you can feel it. “Wander” is out on the local cooperative label Shifting Paradigm Records, which has shifted into high gear this year and is releasing a lot of excellent stuff. 9 p.m. $10 at the door (cash only).

Monday at the University of St. Thomas, St. Paul campus: Jose Antonio Vargas: “My Life as an Undocumented Immigrant.” The Pulitzer Prize-winning journalist and national leader in immigration reform will talk about his journey to America as a child (he was born in the Philippines), his work as an immigration reform activist, the struggles of other undocumented immigrants and the experience of seeing his mother for the first time in 20 years. 7 p.m. in Woulfe Alumni Hall at the Anderson Student Center. Free, but tickets are required.

Missing Prince; ‘The Shining’ is sold out