Theater Latté Da makes more magic with less than almost any theater we know. We first saw this in 2005, when director Peter Rothstein staged Puccini’s “La Bohème” in the tiny Loring Playhouse. “Bohème” is a warhorse opera, with a large cast and chorus, 80-piece orchestra, grand costumes and sets. Rothstein pared down the cast and used a five-piece band: piano, accordion, guitar, violin and woodwinds. People who saw it still rave about it.

And now there’s “Ragtime,” a lollapalooza of a musical written for a large cast and chorus, dancers and orchestra. At the Ritz Theater, Latté Da’s new home in northeast Minneapolis, Rothstein tells the sweeping, epic story with 14 actors and four musicians. Michael Hoover’s sets are minimalist: gray walls and floors, three doors, a curtain, some crates, a few sticks of furniture and a pair of rolling metal ladders. There are rarely more than two props on stage at the same time. The rolling ladders become, among other things, gangways on ships and stands at a baseball game. A grand piano on wheels doubles as a Model T. Don’t worry, it works.

Everything about this “Ragtime” works, including the timing. The musical is based on the award-winning book by E.L. Doctorow, published in 1975 and set in the years 1902-1912. In 18 scenes and nearly 40 songs, this historical pageant tells the stories of three groups: upper-class white Americans, African-Americans and Eastern European immigrants.

Except for the costumes (by Trevor Bowen, who last week won the Emerging Artist Award at the Iveys), some of the events, and the famous characters who thread through the story – anarchist Emma Goldman, Harry Houdini, showgirl Evelyn Nesbit, Booker T. Washington – “Ragtime” could be set in 2016. It’s way more contemporary than it should be. In our world right now, and our country, and our political climate, it’s impossible to experience it solely as a period piece. Not when police officers shout “She’s got a gun!” before beating a black character. Or when wealthy white people sing of a once-ideal world where “there were no Negroes and there were no immigrants.” Or when they dream that “everything will be like it was – the same as it was before, when we were happy.” 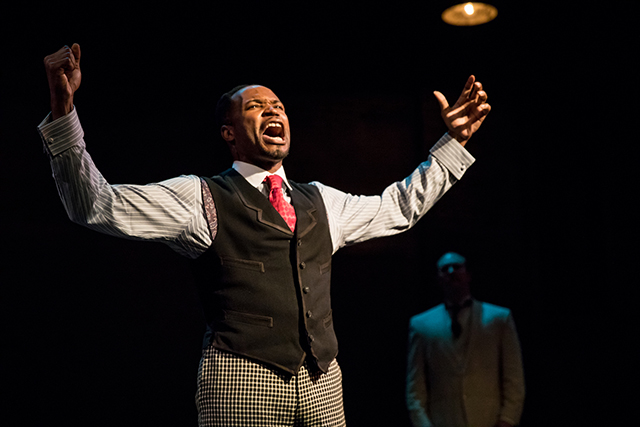 As Mother, Ollmann is the story’s moral center, the character with the most accepting, color- and class-blind heart. Her performance of “Back to Before” toward the end of Act II is tremendous and shattering. So is Murray’s “Make Them Hear You,” the cry that echoes today in “Black Lives Matter.” That one caused a lot of sniffling in the theater. Have tissue handy for the end of Act I, for “Wheels of a Dream,” for the epilogue. Latté Da should leave the lights down just a few moments longer at the end, for the audience’s sake and the cast’s, because everyone needs time to pull themselves together.

This is such a powerful show. By peeling away the pomp and excess of a Broadway production, Rothstein gets to the core of “Ragtime,” a tale of family, humanity, and more hope than we probably deserve.

A new violinist at the SPCO

Last week, the number of full-time members of the St. Paul Chamber Orchestra rose to 22, when Spanish violinist Francisco Fullana was named its newest principal violin. But wait – doesn’t the SPCO already have a principal violin, Kyu-Young Kim, who also serves as its artistic director? It does. Kim and Fullana will share musician roles and responsibilities.

The SPCO now has four violinists in leadership positions, with Stephen Copes and Ruggero Allifranchini as concertmaster and associate concertmaster. “As the SPCO has moved to becoming a primarily unconducted ensemble,” Kim explained in a statement, “the need for even more leadership from our musicians has led us to make the decision to add another principal violin.” 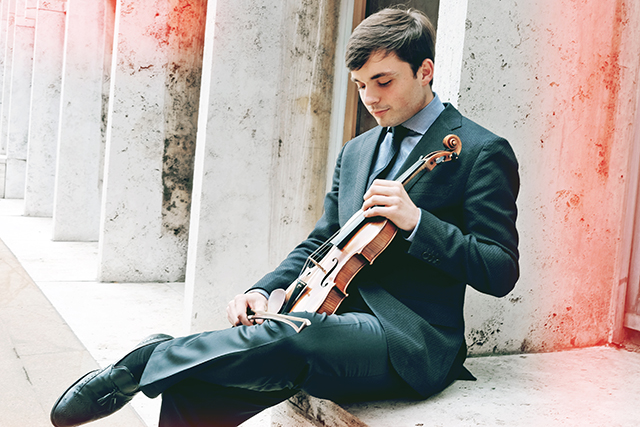 Born in Palma de Mallorca in 1990, Fullana gave his first recital at age 8 and made his solo debut with a symphony orchestra at nine. He has won several prizes, enjoys an international career and is an active chamber musician. Since 2013, he has been the concertmaster of the Chamber Orchestra of San Antonio. He joins the SPCO after an audition process and a trial period last season. Fullana will be featured in several chamber music pieces in upcoming concerts in November and December.

We’re expecting another new SPCO member announcement within the next month or so. The orchestra’s full contractual complement is 28 full-time positions.

If a week goes by without a Graywolf author winning an award or being longlisted or shortlisted for some prize or other, we start to worry. To the long and every-growing list of gold stars for Graywolf, add the MacArthur fellowship awarded last week to Claudia Rankine, poet, Yale professor, and author of “Citizen” and “Don’t Let Me Be Lonely.”

Rankine will be in Minneapolis on Oct. 19 with Marilynne Robinson for the Esther Freier Endowed Lectures in Literature, presented by the Department of English at the University of Minnesota. 7:30 p.m at the Ted Mann, free and open to the public, no tickets or reservations needed. FMI.

Commonly called “genius” grants, MacArthurs come with a $625,000 stipend, spread out over five years, which honorees may spend however they please.

This year’s focus is on diversity, with the surprising news (or maybe not so surprising) that books by diverse authors or containing diverse content are most likely to be challenged or banned. Here’s a list of frequently challenged books with diverse content. Happy reading!

The St. Paul Public Library has planned several events and activities around Banned Books Week. Some branches will host story times with special guests reading to children from books that have been banned or challenged. Some will screen films based on challenged and banned books (including, seriously, “Winnie-the-Pooh”). On Saturday at Metropolitan State University Library, local authors Pete Hautman, Phyllis Root and Marion Dane Bauer will sign copies of their books that have at one time been challenged or banned. FMI.

Released yesterday by PEN America: “Missing from the Shelf: Book Challenges and Lack of Diversity in Children’s Literature.” PEN says: “The report shows that books by or about people of color, people who identify as LGBT, and people with disabilities are significantly more likely to be challenged or banned even as they make up a disproportionately small fraction of all published literature, making narratives depicting the full range of  human experiences less available to students.”

Wednesday (Sept. 28) at Westminster Presbyterian Church: The Thread Live with Jeffrey Toobin. Author Toobin joins MPR’s Kerry Miller to discuss his latest book, “American Heiress: The Wild Saga of the Kidnapping, Crimes and Trial of Patty Hearst.” This is a story that captivated pretty much everyone in the 1970s. Patty Hearst, the then 19-year-old granddaughter of William Randolph Hearst, was kidnapped on Feb. 4, 1974, by the Symbionese Liberation Army, a left-wing terrorist group. By April, she was toting a machine gun, robbing a bank and calling herself “Tania.” This was originally a ticketed event at the Fitz; now it’s free and at Westminster, woo-hoo! Doors at 6:30 p.m., event at 7.

Wednesday at the Ted Mann: Joseph Ellis: “The Second Founding: Four Men Who Created a Country.” A leading scholar of American history, Ellis won the Pulitzer Prize for “Founding Brothers: The Revolutionary Generation” and the National Book Award for “American Sphinx: The Character of Thomas Jefferson.” His seven other books include the New York Times best-seller “His Excellency: George Washington.” He’ll talk about Washington, Alexander Hamilton, John Jay and James Madison, the men most responsible for the creation of the United States. 7:30 p.m. Free. Register here.

Thursday at the Dakota: Café Accordion Orchestra “CAO 10” CD Release. Looking for a sure thing? Come to the Dakota and step inside a French café. Since their first public performance on New Year’s Day 1995, accordionist Dan “Daddy Squeeze” Newton and his band have delighted and entertained audiences here, across the U.S. and in Vienna with their unique blend of French musette, gypsy jazz, Tin Pan Alley, world beat, jazz, blues and movie music. Expect some dancing among the tables, and music from their nine previous recordings along with their newest release. With Eric Mohring on violin and mandolin, Robert Bell on guitar, Erik Lillestol on bass, Joe Steinger on percussion, and guests Diane Jarvi, Tony Balluff and Scott Malchow. 7 p.m. FMI and tickets ($20).

Starts Thursday at the Film Society’s St. Anthony Main Theatre: MIZNA’s Twin Cities Arab Film Festival. Art – maybe film most of all – is a doorway to understanding. How do Arabs view themselves and the world they live in? What are their stories, experiences, hopes and fears? How do they want to represent themselves? Not as Hollywood usually represents them, or as they’re seen in our news media. This will be MIZNA’s 11th year of building cultural understanding through the showing of current, independent films. This year’s festival includes more than 20 films from Palestine, Tunisia, Syria, Egypt, Lebanon and Iraq, and films from local Arab filmmakers. There’s an opening night party at Pracna on Main and a closing night street party at 24th and Lyndale. FMI including trailers, times and tickets ($10/$8 students and Film Society members). Some of the trailers don’t have English subtitles, but all of the films do. Ends Oct. 2.

Robert Redford is coming to the Walker on Nov. 12 for a dialogue with film critic Amy Taubin. It’s the grand finale to the Redford retrospective that starts this Friday, Sept. 30. If you’re a Walker member, you can buy tickets to the dialogue ($35) today (Tuesday, Sept. 27). If you’re not, and if there are any left, you can try on Friday ($45). Online only from 11 a.m. – 1 p.m. both days. Winners will be chosen by random drawing and contacted on Nov. 4.

A powerful ‘Ragtime’ at the Ritz; Graywolf author is a MacArthur Fellow