Every great collection has a story. It starts with a single painting, print, or photograph; a coin, a book, a beetle. For Philadelphian Kim Balaschak, it was a small Grandfather Frost figure someone had made from cardboard and cotton batting. She found it at the Izmailovsky flea market in Moscow in 1998, bought it for almost nothing and brought it home. At the time, she was living in Moscow with her husband, James Balaschak, who was working for Deloitte & Touche.

“It was three years after we moved there,” Balaschak said. “We decided to stay over the holidays and put up a tree. I had been a scrounger of the flea market. I had always loved things like that – yard sales and garage sales – and you do the same things wherever you live. So I was out at the market and lo and behold, I saw one of these little Father Frost figures, and it was so cute. The woman who sold it was sitting there with a bunch of other people, and she had a cardboard box with a fabric scrap on top of it, and a few odds and ends from her place. And that was one of them.”

The figures and ornaments are made of paper, papier-mâché, pressed cardboard, snipped and stamped metal, blown glass, cotton wool and tissue. They are printed and painted, decorated with foil, and sometimes covered with potato starch that has discolored over the years. They are handmade and factory-made; the factories had to secure government approval for the images they produced. Many are exceedingly delicate and fragile, shedding tiny bits of themselves in a breath of air. 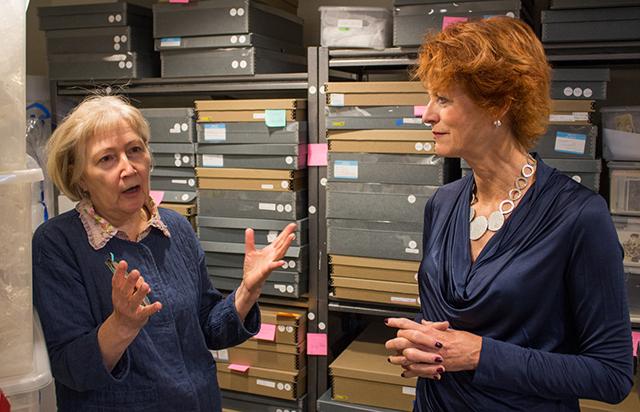 They are specifically holiday decorations, not Christmas decorations. There are no religious themes. All winter holidays including Christmas were banned by the Soviet government in 1925. Celebrating during the winter was a suspicious activity. In 1935, after his daughter attended a Christmas party at the British embassy, Stalin allowed the people to resume celebrating New Year, mainly for the children.

Having amassed a collection, Balaschak wanted to share it. Her first exhibition in Moscow, in 2002, was covered by the international press and Russia’s Channel One, its main country-wide television channel. The show launched a collecting craze. Other exhibitions followed: Moscow again in 2005, New York in 2010, The Museum of Russian Art in Minneapolis in 2013 and 2014.

Balaschak recently started the process of donating her collection to The Museum of Russian Art. 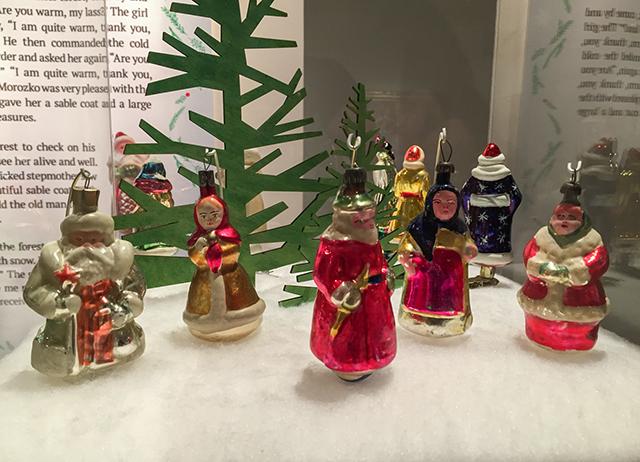 MinnPost photo by John Whiting
A (very) few of the ornaments from “Winter Holidays in Russia” at TMORA.

“I know that my collection will live on here,” she said. “This is the place for it.” Some 300 items are now on display through Jan. 22 in an exhibition titled “Winter Holidays in Russia.” Lovingly chosen and arranged by TMORA’s curator, Maria Zavialova, often accompanied by stories, they’re a window into history, changing times, fashions and political agendas, hope, hardship and the lives of ordinary Russian people. “Every time I open a box, I’m just amazed what I find there,” Zaviolova said of Balaschak’s collection.

A native of St. Petersburg (formerly Leningrad), Zavialova came to the U.S. in 2001 and earned her Ph.D. from the University of Minnesota. The stories on the labels in the exhibition were contributed by her. She knows them intimately, in exquisite detail, because she grew up hearing and learning them by heart. “Russia is a literature-based culture in many ways,” she said. Except for the Sputniks, cosmonauts, hammers and sickles, nearly all of the ornaments on display have some connection to folk and fairy tales.

When Zavialova and Balaschak walked us through the exhibition in November, Zavialova recited part of a children’s poem in Russian. We caught the word “samovar.” She gave us a simple translation: “A fly found a coin and bought a samovar. A spider captured her and wanted to suck the blood out of the fly, but a little mosquito came and freed the fly and married the fly, and then there was a feast.” If you visit the exhibition and wonder, “Why would anyone hang a fly from a holiday tree?” that’s why.

You’ll also find ornaments from stories about a swan princess, a group of oppressed vegetables, a prince who disguises himself as a bee, a woman who can turn herself into a snake, a humpback horse who can fly, a golden fish and friendly crocodiles.

And corn. “The corn was ideological,” Zavialova explained. “A lot of corn ornaments were made in the early 1960s, after Khruschev visited the United States. He went to Iowa to a farm and was so impressed with American corn that he came back and began to enforce planting corn.”

Balaschak’s collection has historical and cultural value. Which raises the question: Why is it here and not there? 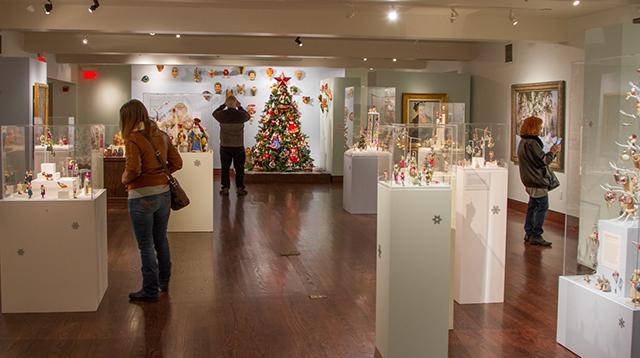 “The Russian Ministry of Culture gave me permission to take it out,” she said. “Nobody thought I would get it out. It’s very famous. But because I exhibited, the representatives of the Ministry of Culture let me take my collection in its entirety, without picking through it and taking items that other collectors didn’t have, because that would have destroyed the collection. What they said to me was, they wanted me to bring it back here and show a positive side of Russia and the former Soviet Union, and that’s exactly what this does.”

Except it almost didn’t happen. “I didn’t get permission to move the ornaments until a month before we were leaving,” she said. Luckily, “once I finally got permission, everything was already packed from a previous exhibition in Moscow.”

Was Balaschak prepared to leave the collection behind, if it came to that?

“I was, because there was no way I was going to sneak it out. Then I couldn’t show it. The first thing I did when I got back to the States was to get on a train and go to Washington, D.C. I went to the Russian embassy and said, ‘This collection is here.’ There’s some good information out there in Russian about it, so they were happy about it. They don’t really do much, but they’re happy about it. And now we can exhibit it with pride.”

“Winter Holidays in Russia” continues through Sunday, Jan. 22. All exhibitions are included with the price of admission (adults $10, kids 0-13 free, 14+ and students with ID $5, seniors $8). On Wednesday, Dec. 28, at 10:30 a.m., curator Maria Zavialova will lead a “Russian Fairy Tales” tour of the show, with stories, a scavenger hunt, and tea-time with juice and cookies. This event is sold out, but you might call the museum at 612-821-9045 and ask about a waiting list.

Russian holiday decorations on exhibit at Museum of Russian Art