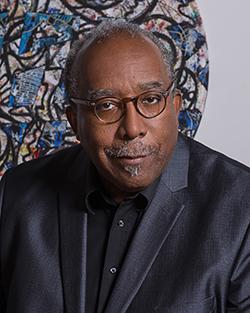 If you’re an artist in Minnesota, what’s the best way to put your art in front of roughly 2 million people? Be chosen as a commemorative artist for the Minnesota State Fair. For 2017, that uniquely Minnesotan honor goes to St. Paul artist Ta-coumba Aiken.

Many Minnesotans already know his vibrant, colorful “rhythm painting and spirit writing” style. An artist, arts administrator and educator who focuses on public art and collaborative projects, Aiken has taken part in creating more than 600 murals and public art sculptures. In St. Paul, he’s known as the unofficial mayor of Lowertown. His “Forever Saint Paul” Lite Brite mural, permanently on display in Union Depot, won the Guinness Record. He’s on tap to transform the exterior of Walker West Music Academy on Selby Ave. with a large-scale mural.

Currently serving on the board of MCAD, Aiken has received numerous awards, including a Sally Irvine Award for Vision and a Bush Foundation Visual Arts Fellowship. His work is in public and private collections around the world, including the Walker, the Bush Foundation, and the Spiritmuseum in Stockholm, Sweden.

“I create my art to heal the hearts of people and their communities, by evoking positive spirit,” Aiken said in a statement. “I love the Minnesota State Fair, and I look forward to expressing the joy of the fair on canvas. My interpretation will show the fair’s harmony and chaos at the same time.”

Aiken’s work will be available as a commemorative poster, a limited number of signed prints and other merch. An official unveiling will take place at the State Fairgrounds in June, and the original painting will be on display during the Fair’s 12-day run (Aug. 24-Sept. 4).

Aiken is the 14th Minnesota State Fair Commemorative Artist. Here’s a look at the artwork by the first 13. This is a great tradition and we’re glad the State Fair is continuing it.

On Nicollet Mall, nearly a mile of public art

Amid the disharmony and not at all joyous chaos of the Nicollet Mall reconstruction, Northern Lights.mn has given us something to look at, think about and play with in our heads.

As part of the Great Northern festival happening now in the Cities, Northern Lights is presenting the temporary installation “Living Banners and Words for Winter.” Created by MCAD professor and multimedia artist Piotr Szyhalski with the The People’s Library, an artists’ collective of MCAD students, it’s a long series of metal construction barriers hung with tyvek banners, each hand-printed with a large word in easy-to-read block type.

The barriers, 560 in all, run on both sides of the Mall from 12th St. to 5th St. The words – 400 adjectives and nouns – are paired, sometimes repeated and linked by red mathematical symbols: plus, minus, times, divided by and equals. As you walk the circuit, if you’re not looking down at your smartphone, you can’t help but notice and read them.

A few examples: ONE HEART MINUS THEIR HOMES EQUALS POOR HARVEST. What does that mean? That’s up to you. Each pair of words forms a mental image. Some are upbeat, some are neutral, some are downers. One moment you meet SOFT MUSIC, ECSTATIC WEATHER, BIG DREAMS or ONE JUSTICE, the next it’s BITTER LIFE or DYING YEARS.

Maybe you start noticing how the words relate to the Mall itself – the bulldozers, the concrete forms, the torn-up street, the lighted skyways, the big signs in the Macy’s windows saying “Store Closing” and “Nothing Held Back.” 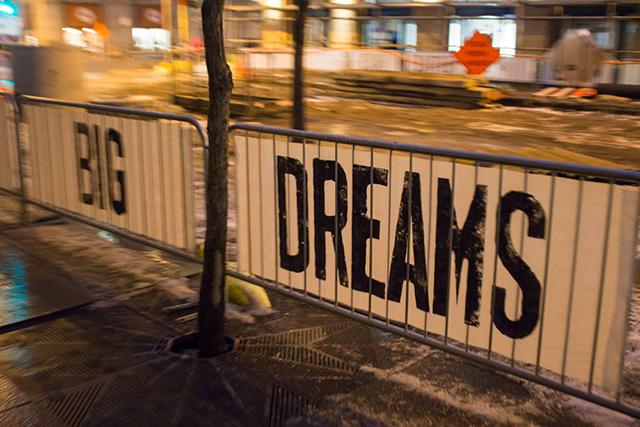 “Something magical happens as we bring two words together,” Szyhalski told Northern Lights president and director Peter Dietz in a conversation available online. It’s true. The adjective colors the noun, and often the noun is paired with an adjective you wouldn’t expect. (The conversation is worth reading if you want to know more and go deeper.)

That’s the “Living Banners” part of the installation. The “Words for Winter” isn’t as obvious as the construction barriers, and it takes standing still and watching words scroll across electronic construction signs. The words, short poems about winter, are by 17 Minnesota-based poets including Heid Erdrich, Sarah Fox, Moheb Soliman, Lara Mimosa Montes, Sagirah Shahid, Sun Yung Shin and Joel Turnipseed. There are four signs along Nicollet: at 5th St., between 9th and 10th, 10th and 11th, and 11th and 12th.

“Living Banners and Words for Winter” will be on display through Sunday, Feb. 5. Walking through it has a meditative quality, a simultaneous quieting and awakening. And it’s not trying to sell you anything, except the pleasure of seeing things a bit differently.

For her short story collection “Subtle Variations and Other Stories,” Minneapolis author Miriam Karmen has won the inaugural First Fiction award, offered by Holy Cow! Press in Duluth and sponsored by the Lindquist & Vennum Foundation.

Karmen will receive a $5,000 cash award, and her book will be published in October 2017 by Holy Cow! Press.

Some sixty-five manuscripts were submitted by writers living in Minnesota, Iowa, Wisconsin, Illinois and Michigan, the prize’s territory. Author Linda LeGarde Grover chose “Subtle Variations and Other Stories” from among six finalist manuscripts.

Karmel previously won Minnesota Monthly’s Tamarack Award for her short story, “The Queen of Love.” Her novel, “Being Esther,” was published by Milkweed Editions in 2014.

Opens in previews tonight at the Ritz: “Peter and the Starcatcher.” Joel Sass directs Theater Latté Da’s production of the “Peter Pan” backstory. Based on the Tony-winning play based on the children’s novel, it imagines how Peter, Captain Hook and other characters came to be. The cast includes Tyler Michaels as Boy/Peter, Megan Burns as Molly and Pearce Bunting as the pirate Black Stache. With choreography by Carl Flink and costumes by Sonia Berlovitz. 7:30 p.m. previews continue through Friday, Feb. 3; opening night is Saturday Feb. 4. FMI and tickets ($30 previews, $48 opening night, $45 all other performances). Ends Feb. 26.

Thursday at the U’s UROC Gallery: Opening reception for “Doll Power! Celebrating the Passion of Play.” Growing up as an African-American child in St. Paul, Robin Hickman played with white Barbies, like everyone else. Today Hickman – an artist, community leader, social activist, and TV and film producer – has a large and fabulous collection of multicultural dolls. This show of photographs, dioramas, detailed ensembles and narratives has much to say to all of us, and kids will go crazy. At the Robert J. Jones Urban Research and Outreach-Engagement Center, 2001 Plymouth Ave. N. 5-8 p.m. Free and open to the public. Ends March 31.

Thursday at Hamline’s Sundin Music Hall: “Love Answers.” We’ll let the organizers describe this timely concert: “When we are faced with hate, fear, violence, and struggle, this concert explores how love can answer our most challenging moments.” Pianist Laura Bolton has gathered a group of 10 Twin Cities string players and classical/opera singers for a concert of music by American composers and songwriters “that brings love’s voice into the conversation.” 7:30 p.m. $10 suggested donation at the door. Cash or check only. Proceeds go to the Minnesota Coalition for Battered Women. FMI.

Friday and Saturday at the Cedar: The 2017 Cedar Commissions. Formerly the 416 Commissions, the Cedar Commissions pays local emerging composers and musicians to make new music. Supported by a grant from the Jerome Foundation, this important series, now in its sixth year, has so far showcased new work by more than 30 local artists. This year’s six commissioned artists will perform in a pair of back-to-back concerts this weekend. Friday, Feb. 3: Bethany Battafarano, Ritika Ganguly and Dameun Strange will explore Western classical and Latin American sounds, turn poetry into musical patterns drawing on Bengal and North Indian music and neo soul, and present an afrofuturistic conceptual opera. Saturday, Feb. 4: Krissy Bergmark, Zach Baltich and MC and poet See More Perspective will collaborate with a dancer, create new sounds with contact microphones and found objects, and perform a hip-hop/classical mashup. Both nights: doors at 7 p.m., show at 8. FMI and tickets ($10 each night, $15 series pass).

Ta-coumba Aiken is the 2017 commemorative artist for State Fair