Some Liquid Music concerts are new projects or works in progress, like February’s event at the Amsterdam with trumpeter Ambrose Akinmusire and rapper Kool A.D. And some are polished jewels. Saturday’s performance at the Ted Mann of Sarah Kirkland Snider’s song cycle “Unremembered” falls squarely in the polished category.

Inexplicably — and in a coup for the SPCO’s Liquid Music and its curator, Kate Nordstrum — this will be the U.S. premiere of a work that was one of the most acclaimed album releases of 2015. Critics called the album “rapturous,” “haunting,” “enthralling,” “poetic” and “immensely rewarding,” and it made dozens of best-of lists. We’ve had it for two weeks and can’t stop listening.

All three vocalists featured on the recording — Shara Nova (My Brightest Diamond), Padma Newsome (Clogs) and DM Stith (Sufjan Stevens) — will be at the Ted Mann. Mischa Santora will lead an ensemble including musicians of the St. Paul Chamber Orchestra. Video projections on the hall’s big screen will show hand-drawn illustrations by writer and visual artist Nathaniel Bellows and images of rural Massachusetts, where he spent his childhood.

Bellows’ poems about that time — strange, intense and dark — inspired Snider’s music and are the lyrics for her songs. “Someone breathed into my ear/the vapor of the dead” are the first words we hear, and we’re drawn into a world of sad, bad and scary things real and imagined: ghosts, a witch, a man in flames, a suicide, a slaughterhouse on a hill, a body in a pond. Wrapped in Snider’s lush, expressive music, the poems become songs of innocence lost and wisdom gained. It’s like a gothic novel unfolding in the most delicious way. (If you want to read the lyrics and view Bellows’ illustrations, here they are.)

“Unremembered” is Snider’s second album after “Penelope” (2010), about a brain-damaged veteran who appears at his wife’s door after an absence of 20 years. Liquid Music regulars may recall that “Penelope” was on the 2012-13 season but was sidelined by the SPCO lockout, and Shara Nova (then Shara Worden) gave a solo performance instead. So this is the first time we’ll hear one of Snider’s complete works performed live in the Cities.

Snider will arrive here from touring “Unremembered” in Holland and Belgium. We emailed her some questions earlier this week.

MinnPost: How would you describe your music to someone who’s totally new to it?

Sarah Kirkland Snider: I would say that all of my music — whether for voice, orchestra, chamber ensemble, or solo instrument — is narrative. I strive to be open to all of my influences and write with as broad-minded an aesthetic palette as possible, in order to have a diverse emotional vocabulary and render musical narratives as candidly and precisely as possible.

MP: “Unremembered” is incredibly beautiful. It’s also dark and haunting and sad. So is your earlier work “Penelope.” What draws you to the dark side, as a composer?

SKS: I think it’s investigation – wanting to better understand it, make sense of it, make peace with it. I think writing music is generally my way of finding order in a chaotic universe, and the universe is often a heartbreaking place. The past few years of my life have been intense ones – losing my father and other family members, and having two children, one of whom was born early and has had some challenges. But I think that even my darkest works have warmth and hope in them. I don’t think I can effectively render shadow without showing some light, and I’m equally interested in the light. I actually frequently find that it’s joyful music that makes me saddest.

MP: What about Nathaniel Bellows’ poems inspired you and made you see so many musical possibilities?

SKS: They were wonderfully imagistic little short stories, rendered with beautiful language and emotional nuance. Each poem — particularly in the company of the colorful, layered illustration that Nathaniel created for it — evoked a strong curiosity in me, felt like a little world I wanted to know more about. I was particularly compelled by the emotional complexity — the way he would frequently color an emotion with its opposite, or juxtapose multiple layers of meaning. That’s something of particular interest to me as a composer, the layering of multiple emotional planes.

MP: What do you want the audience to remember most about “Unremembered”?

SKS: “Unremembered” is about innocence and experience, the journey from childhood to adulthood, and the way that places in our youthful past can have a psychic hold on us for the rest of our lives. It’s a look at the ways in which nostalgia can inspire both affection and dread, regret and gratitude. It uses memories from a rural New England childhood to look at the distressed beauty that can be found on the path to wisdom and resolve. 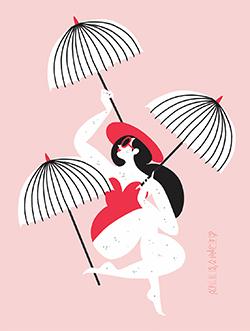 Courtesy of Kill Kancer
A poster about skin cancer

Tonight (Thursday, March 9) at Soo Visual Arts Center: Opening party for the “Art Kills Kancer” poster campaign. The problem (well, the problem other than cancer) is that we hear a lot about cancer prevention, and most of what we hear is boring and same-old and easy to ignore. This campaign steps up the messaging about the “Hateful Eight” cancers with creative and disruptive posters, which will be on view and available for purchase as limited editions. With DJ Lori Barbero. 6-9 p.m. FMI. Free. Posters on sale through Sunday, March 12.

Tonight at First Church: “Humans of Minneapolis” Artist Talk and Book Signing. Photographer, educator, blogger and now author Stephanie Glaros has spent the past six years talking to people, taking their pictures, and listening to their stories. Her goal: to make ours a more caring, empathetic community and bring people together despite differences. Based on her popular “Humans of Minneapolis” blog, her new book spotlights dozens of ordinary citizens who live, work and play on the streets of downtown Minneapolis. Come to be entertained and inspired. 7-9 p.m. Free.

Tonight at the Weisman: First Books Reading. At this annual event, alums of the U’s Creative Writing Program who are now published authors read and speak about the experience of getting published. This year it’s Kathleen Glasgow, whose “Girl in Pieces,” published by Delacorte, became a New York Times YA fiction bestseller; Andria Williams, whose novel, “The Longest Night,” was published by Random House; and poet Ryo Yamaguchi, whose “The Refusal of Suitors” was published by Noemi Press. 7 p.m. Free.

Starts tonight: The Ninth Annual Hitchcock Film Festival. Because watching Hitchcock on the big screen is a whole ’nother thing. Presented by the Trylon, the festival starts at the Heights and moves to the Riverview, both single-screen vintage theaters. Here’s the schedule. At the Heights: Tonight (Thursday, March 9): “Rear Window” in 35 mm. Wednesday-Thursday, March 15-16: “Vertigo” in 70 mm. Both 7:30 p.m. At the Riverview: Monday, April 10: “Psycho.” Monday, April 17: “The Wrong Man.” Monday, April 24: “Rope.” Monday, May 1: “Frenzy.” Monday, May 8: “The Birds.” All 7 p.m. FMI and tickets ($10/8).

Friday at Vieux Carrê: Dave King Vector Families. Drummer King is a man of many projects including The Bad Plus, Dave King Trucking Co., Dave King Trio and Happy Apple. His Vector Families is the return of a trio from the first decade of the 2000s – King, guitarist Dean Granros and bassist Anthony Cox – plus sax man Brandon Wozniak makes it four. A night with King, and we’ve had a lot of them over the years, is never dull. 9 p.m. $15 at the door, cash only.

Saturday at Plymouth Congregational Church: Stuttgart Kammerchor. With 15,000 people in town for the American Choral Directors Association (ACDA) annual conference, you’d think there’d be a ton of public concerts. But noooo. Just three, and this is the third and final. Frieder Bernius leads the internationally renowned choir he founded in 1968, which has won scads of prizes and made dozens of albums. The program includes works by Fasch, Schubert, Mahler, Wagner, Mendelssohn, Mozart, Bruckner and arrangements by Clytus Gottwald. 2 p.m. Free, with a free-will offering.