In 1993, a group of potters with homes and studios in and around the St. Croix Valley – in Stark and Sunrise, near North Branch and Almelund, south of Marine on St. Croix and west of Stillwater – decided to all have a sale on the same weekend. Looking back, this was probably the first totally-pottery artists’ studio tour in the United States. No jewelry, wood, glass, fiber, metal, prints or paintings. Just pots. Lots of pots, less than an hour’s drive from the Twin Cities.

On Mother’s Day weekend, May 12-14, the St. Croix Valley Pottery Tour will have its 25th anniversary. Thousands of people will visit seven potters’ studios, meet and talk with 60 potters (including invited guests from 17 states and England), and look at and handle some 10,000 pots. Thousands of pots will be sold.

For potters and buyers, including collectors who come from across the U.S., Europe, Asia, and South America, the tour has been a game-changer. It has enabled potters to make a living as artists and has put pots in countless homes. It’s the ultimate pottery shopping extravaganza. It has made many Minnesotans (and Wisconsinites) people who like to drink coffee from handmade mugs, who decorate with pots, who give pots as gifts, and who know a good pot when they see one.

Today there are several pottery tours throughout the spring and summer – the Western Wisconsin Pottery Tour, the Rustic Road 13, and the Cannon River Clay Tour, to name a few – but the St. Croix Valley Pottery Tour is the mother of them all. It’s a great place to start if you want to learn something about clay and develop an eye.

In a time when people are seeking authenticity, pots are the real deal. Pots are artisanal. Pots are cool. They’re literally, obviously handmade, crafted one at a time from dirt and fire. The tour is a big, sprawling show of handcrafted small-batch ceramics. Here are 10 tips to guide you through it.

1. Visit the website first. This will give you an idea of each potter’s aesthetic. See something you really like? Go there first. Get a map. Print out the PDF or download it to your phone. Then pick up a tour brochure along the way.

2. You can do the whole tour in a day, if you don’t talk much with the potters. But it’s the personal connection that makes the pots come alive. Years later, when you reach for that plate, bowl or pitcher, you’ll remember the potter you bought it from. If your time is truly limited, it’s better to visit a few studios than to race through all of them.

3. Friday is the busiest day, Sunday the most laid-back. Don’t worry that you’ll miss out on the best pots if you’re not there at the opening. This is high-quality work by exceptional artists, many of whom are nationally known and award-winning. There will be plenty of great pots on Sunday. Also, people with their moms. (It’s Mother’s Day.)

4. Each studio is like a small art festival, with as many as eight potters and their work on site. At most studios, the potters are with their pots. You meet a potter and see a body of work. At Guillermo Cuellar’s studio in Shafer, everyone’s pots are mixed together, and the potters move around. Cuellar believes that promotes surprise and discovery.

5. Each studio has its own vibe. Richard Vincent’s is an oak-shaded backyard. Linda Christianson’s is in a clearing in the woods near her log home. Will Swanson and Janel Jacobson’s is a building and fields near Wild River State Park. Guillermo Cuellar’s is on a hill overlooking the St. Croix River. Jeff Oestreich’s is an early Minnesota farmstead. Connee Mayeron’s is a barn, a building and a scattering of tents near the Franconia Sculpture Park. Matt Krousey’s home and studio are also in a clearing in a woods. (Note to past tour visitors: Krousey bought Robert Briscoe’s place last year. Bob continues as a guest.)

6. The potters are friendly and helpful. They are proud of their work and want to tell you about it. They’re not universally super-chatty; after all, these are artists who spend a lot of time alone, making pots. But they’re nice people who will gladly answer your questions.

7. Hospitality is part of the tour’s culture. Every host potter offers drinks and snacks, or something more substantial, like soups and salads. Some bring in food trucks. Some have beer and wine.

8. Credit cards are accepted everywhere. So are checks.

9. If you show up on a bicycle or motorcycle, or your car is so full of pots you can’t squeeze in another one, everyone ships.

10. Parking can be a challenge, but at least you don’t have to pay for it. Krousey, Cuellar and Christianson provide free shuttles for those who park at a distance. Heads up: Oestreich’s studio will likely be a traffic jam. One of his guests is the internationally known Stillwater potter Warren MacKenzie. Another is Roelof Uys, head potter at the legendary Leach Pottery in England. And Iowa’s Clary Illian, who also trained at the Leach Pottery (as did Oestreich), will be there in person, though she won’t be selling pots. This is all catnip to collectors, and the tour draws many collectors.

Coming this summer to the Weisman Art Museum: “A Culture of Pots: The 25th Anniversary of the St. Croix Valley Pottery Tour,” a large exhibition of pots by all of the host potters and many of the more than 100 guest potters who have been featured on the Tour over the years. Opens June 17, closes Sept. 10. The opening reception is Friday, June 23.

Tonight (Friday, May 5) at Dreamland Arts: “Ragtime Women.” The inaugural production of Theatre Elision, a new professional theater formed to tell stories that combine music, acting and visual arts. “Ragtime Women” is an original musical about four largely forgotten women from the 1920s – Cora Salisbury, Julia Niebergall, May Aufderheide and Gladys Yelvington – who defied the conventions of their time to do what they loved: compose and perform ragtime music. The show includes songs by the women being portrayed and other music from the period. Directed by Lindsay Redman; with Jen Maren, Christine Polich, Krin McMillen and Tara Schaefle. Nailing those ragtime rhythms and tight harmonies isn’t easy. 7:30 p.m. FMI and tickets ($15). Ends May 14. 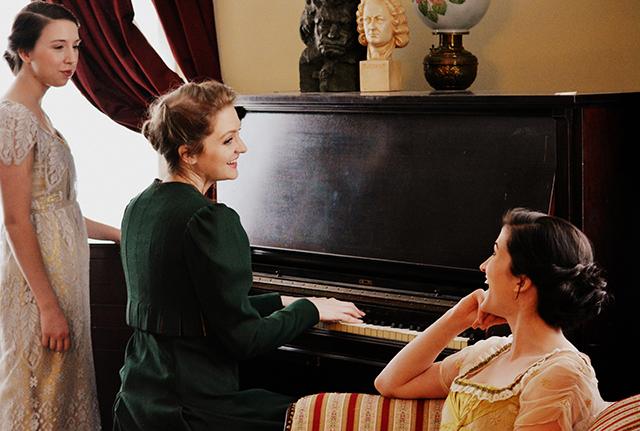 Saturday at Mixed Blood Theatre: Opening night for “Little Wars.” One week, two new professional theaters? This is the debut production of Prime Productions. Their focus: celebrating women in their second act. Their mission: to explore, illuminate and support women over 50 and their stories through the creative voice of performance. The play is the regional premiere of Steven Carl McCasland’s “Little Wars,” a fictional dinner party hosted by Gertrude Stein and Alice B. Toklas for Agatha Christie, Lillian Hellman and Dorothy Parker. Shelli Place directs an all-woman cast including Candace Barrett-Birk, Sue Scott (formerly of “A Prairie Home Companion”), Elizabeth Desotelle, Laura Adams, Vanessa Gamble, Alison Edwards and Miriam Schwartz. 7:30 p.m. FMI and tickets ($25). Ends May 21.

Saturday at MPR’s HQ: 50th Anniversary Open House. You don’t have to be a member to tour MPR’s headquarters (recently renamed the Kling Media Center) and meet some of the people you hear on the air: news hosts Cathy Wurzer and Tom Weber, meteorologist Paul Huttner, economics correspondent Chris Farrell and others. Musical activities, kids’ activities, tours of the music library, an “audio petting zoo,” giveaways, a photo booth, and complimentary cookies are among the plans for the day. FMI. 11 a.m. – 3 p.m. at 480 Cedar Street in St. Paul. Free.

Saturday at Union Depot: Train Day. With real locomotives and railcars on display outdoors, presentations, activities and exhibits indoors, this day is a dream for train buffs. It’s your chance to see Union Pacific and Twin Cities & Western locomotives, the Amtrak Veterans locomotive, and the Northern Pacific Railway Post Office/Combine Car No. 1102, which will accept mail for Railway Post Office cancellation for the first time in 40 years. (Special envelopes will be for sale.) Check out the miniature train sets, visit the many exhibitors, take a free educational session or two, and tour a Jefferson Lines coach. 10 a.m.-5 p.m. FMI. Free.

Sunday on your teevee: “MN Original: Layne Kennedy, Dakota Hoska, Guitar Party, Electric Machete Studios.” The new episode of Twin Cities PBS’ award-winning arts and culture series hangs out with renowned photographer and world traveler Kennedy, whose storytelling images have appeared in Smithsonian, Audubon, National Geographic Traveler and other magazines. Hoska once worked as a model so she could travel and visit the world’s museums; today she’s an artist who is passionate about color. Jeremy Ylvisaker and his band Guitar Party play “Phantom Banana,” a song as fun as it sounds. And we visit Electric Machete Studios on St. Paul’s Westside, home to Latino and Latina artists who are using art, music and culture as a form of resistance and a way to express who they are as indigenous people. “MN Original” airs Sunday night on TPT 2 at 6 p.m. and again at 10. Watch it online anytime. 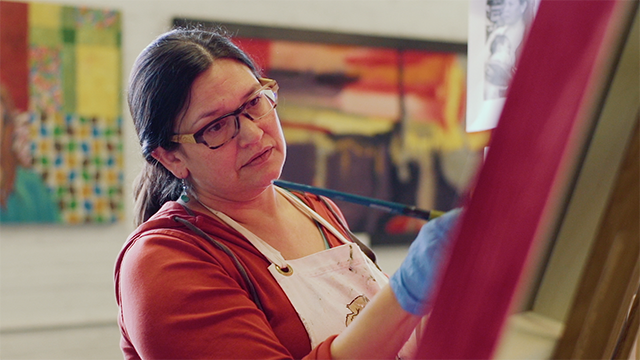 Tuesday at the American Swedish Institute: Bedroom Community and Friends. Liquid Music meets Cocktails at the Castle in an evening that’s part concert, part party, and part of the SPCO’s “Where Words End” mini-Nordic music festival with Pekka Kuusisto. He’ll perform, along with Valgeir Sigurösson, Ben Frost and Sam Amidon, all members of the Icelandic record label/collective Bedroom Community. Swedish-Iranian singer Mariam Wallentin was the featured singer, but her visa was denied, so Poliça’s Channy Leanagh will step in. The concert will be held outdoors in the courtyard, with a back-up plan in case of rain. Doors at 6 p.m. (cocktails and light bites from FIKA available for purchase), music at 7:30 p.m., post-performance gallery conversations at 9:30. FMI and tickets ($25; $20 Liquid Music subscribers and ASI members).