When was the last time you went to an opera and the leading man offered you a chicken-salad profiterole? “Hi, I’m Donny G.,” says Gabriel Preisser, holding the platter. “Welcome to my club.” In a few moments, Preisser will sing the demanding role of Don Giovanni, tireless seducer and unrepentant scoundrel, in Mozart’s tragicomic opera. But first, he works the crowd.

Set in a speakeasy in Prohibition-era 1932, staged in several rooms in the Woman’s Club, “Don Giovanni” is great opera and great fun. Presented by Skylark Opera Theatre and Angels & Demons Entertainment, it’s an up-close-and-personal way to experience an art form many people find intimidating.

There’s a cast of seven singers (one sings two roles, so all eight characters are covered) and an ensemble of six to serve as peasants, servants and demons. The orchestra is a piano, played by the indefatigable Mary Jo Gothmann. The libretto, originally in Italian, is sung in a new English translation. There’s no conductor and very few props. The production makes use of the spaces it’s in: a lounge, a ballroom, a dining room and a theater. The audience follows the cast from place to place, via stairs or elevator.

This stripped-down, site-specific model worked very well for earlier Skylark and Angels & Demons shows. Both “The Tragedy of Carmen” (staged earlier this year at the Midpointe Event Center) and “The Marriage of Figaro” (2016 at the James J. Hill House) were terrific. We can’t wait to see what they’ll do next, or where.

Because this type of production doesn’t have the usual grand sets and crowd scenes, the focus zooms in on the cast. Can they sing? Can they act? Are they still convincing when they’re walking right past you, or weaving between tables in the dining room scene, close enough to touch? They are, and wow, can they project. We came away with fresh respect for operatic voices.

As the wicked, rapacious Don Giovanni, baritone Preisser is devilishly attractive at first, then sinks into total dissolution. (“All of his appetites are vicious,” sings his servant, Leporello.) As Leporello, baritone Andrew Wilkowske is the perfect foil, outstanding in the famous “Catalog” aria where he lists his master’s many conquests (“640 Italians, 230 Germans, 100 in France, 90 in Turkey – but in Spain, 1,003!”). Tenor David Blalock as Don Ottavio struggles to avenge the murder of his fiancee’s father, the Commendatore, so she’ll marry him; doubling as the powerless peasant Masetto and the Commendatore, who returns as an implacable statue to seal Giovanni’s doom, Benjamin Sieverding is spectacular, gliding across the floor like stone on wheels, and his big, rich bass voice brings chills.

The women aren’t mere victims of Giovanni’s wiles. Karin Wolverton’s Donna Anna is grief-stricken but resolute, Tess Altiveros’ Donna Elvira is fiery vengeance, Quinn Shadko’s Zerlina is at least twice as clever as the Don, and nearly as manipulative. All are sopranos with strong, beautiful voices.

As stage director (and Skylark’s Artistic Director since October 2016), Robert Neu knows just what to do with rooms not made for opera: fill them with song and action. Lighting designer Mike Grogan puts light where it needs to be and makes creative use of flashlights. And Samantha Fromm Haddow’s costumes are exquisite, especially the women’s dresses.

Small bites are served before the opera begins and during the banquet scene, and desserts after. Moving from place to place adds time (an earlier MinnPost preview erroneously gave the total time as 2 hours including intermission; it’s closer to 3 hours) but also provides chances to stretch.

“Don Giovanni” premiered in 1787 and has some very old notions. The Don is a horrible human being, an unrepentant sexual predator to the end. Leporello is equally guilty, and domestic abuse – the topic of one aria – isn’t funny. It’s infuriating when women who have been Giovanni’s victims fall into his arms again. But that’s the story Mozart and his librettist, Lorenzo Da Ponte, chose to tell. The Skylark/Angels production rounds some of the sharper edges with broad, almost slapstick comedy. And, ultimately, Giovanni gets what he deserves.

Throughout, the voices are crystal clear and the lyrics mostly crisp – until the scene in the theater. That’s our only cavil. Late in the opera, it becomes hard to understand what the characters are singing, and without supertitles, we’re kind of lost.

The SPCO, staying put for a change in the Ordway Concert Hall, played a mix that demonstrated their artistry and openness. First, Mendelssohn’s “Fair Melusina” Overture, based on a German fairy tale about a river spirit and her human lover. Then the world premiere of American composer Pierre Jalbert’s Violin Concerto, a modern work that included some pitch-bending and a thorny cadenza concertmaster Steven Copes appeared to breeze through.

The concert ended with Beethoven’s Seventh Symphony, conducted with joy and flair by Thomas Zehetmair. Where we would normally get a solemn Allegretto, he gave us one with a bounce to its step. No sadness here, folks, it’s the season finale! It added excitement to a work that became more thrilling as it powered toward the final notes, which brought everyone to their feet with wild applause.

This was Zehetmair’s final weekend as an SPCO artistic partner. We remembered something Kyu-Young Kim, the SPCO’s artistic director, had said in conversation leading up to the concert: “There’s nothing that gets between Thomas and the music.”

The next weekend we went from the relatively intimate Concert Hall to Orchestra Hall, from an orchestra of some 34 musicians (for the Beethoven) to an orchestra of more than 100 musicians plus the 160-strong Minnesota Chorale – over 270 humans and many instruments. The stage had been extended to hold them all. 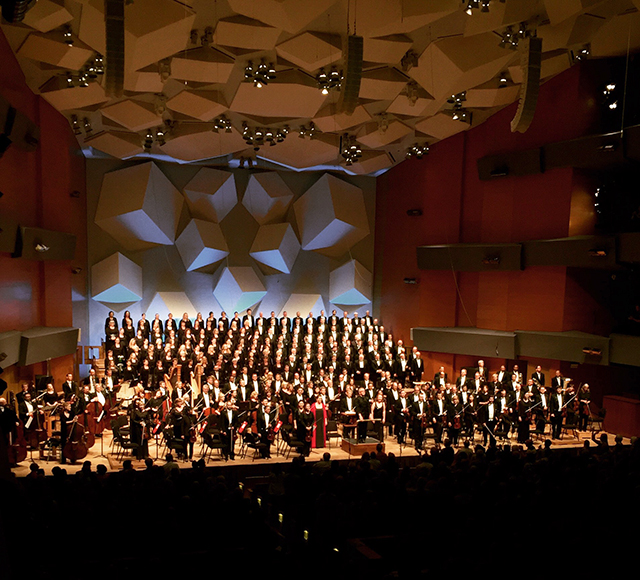 Photo by John Whiting
The Minnesota Orchestra ended 2016-17 in peak form and made us eager for its return.

The program included just two works: Haydn’s Concerto in D major for Keyboard and Orchestra, about 20 minutes long, and Mahler’s Symphony No. 2 in C minor, “Resurrection,” just short of 90 minutes. The Haydn is a lively entertainment originally written for royalty; the Mahler is death and life everlasting and everything in between. How could the Haydn hold its own? Canadian virtuoso Marc-André Hamelin played it brilliantly, then returned with an encore: a little something he’d written for the most recent Van Cliburn competition, where Hamelin was a judge. It was a beast.

The first part of the concert was splendid. And then came the Mahler, so magnificently played that we spent most of the 90 minutes leaning forward or standing (we could do that where we were sitting, in a back row of a side balcony). It was almost like watching a grand theater piece, with musicians exiting and entering, soloists appearing (mezzo Sasha Cooke in glittery black, soprano Ruby Hughes in a sweep of crimson), and our mighty Minnesota Chorale at the back of the stage, waiting patiently through the first four movements (they don’t get to sing until the fifth), then entering, almost at a whisper, with “Rise again” sung in German. From there, it was a straight shot to Heaven, carried by glorious voices, brilliant brass and pealing bells. All led by Osmo Vänskä, pure energy on the podium, bringing out the best in everyone on the stage.

We’re still buzzing from both concerts. Both the SPCO and the Minnesota Orchestra ended 2016-17 in peak form and made us eager for their return. Back when both were locked out in labor disputes, some people were asking, “Do we really need two orchestras”? Two singular, remarkable orchestras, committed to their communities? We’re lucky to have them.

Now at the Mpls Photo Center: “BASH.” If you’ve ever been fascinated by the weirdness of professional wrestling, don’t miss this. In 1984, Karen Melvin was an intern for the Skyway News when she was sent to shoot some rasslers at the St. Paul Civic Center. Turns out she was really good at it. Here’s the story on “Almanac.” Daily from noon-5 p.m. Free and open to the public. Ends July 30. Dial 200 at the front door for entry. 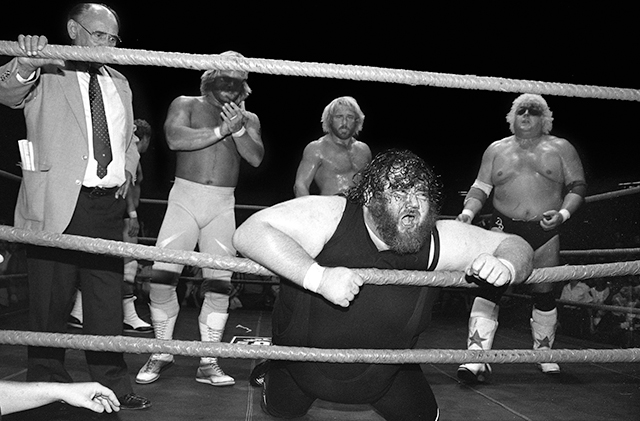 Courtesy of the MPLS Photo Center
Photo by Karen Melvin

Tonight at Harriet Island: River City Revue: “Murder on the Mississippi.” A two-hour cruise on board the Jonathan Padelford through the Mississippi National River and Recreation Area, with a twist: You’ll help solve a murder. The improv theater production is set on a riverboat during Prohibition. A collaboration among Fearless Comedy Productions, Mississippi Park Connection, the National Park Service and Padelford, this sounds like an enjoyable – and amazingly inexpensive – evening. In between following clues, you can also grab a drink, head for the upper deck and take in the views. 6:30-9 p.m. FMI and tickets ($18/$15 members). Also July 19.

Friday at The M: McKnight Speaker: Jetsonorama. This is the second installment of a new partnership between the McKnight Foundation and Springboard for the Arts that’s bringing interesting people to the Cities for public conversations. Photographer, public artist, activist and physician Chip Thomas, aka Jetsonorama, has been working with the Navajo Nation since 1987 on the Painted Desert Project. He’ll talk about his work and public practice. 6-8 p.m. FMI and registration. Free.

Saturday in St. Paul: Sacred St. Paul Bus Tour. Professional photographer Doug Ohman, whose work is featured in the Minnesota Historical Society Press book “Churches of Minnesota,” will lead a tour of three important St. Paul churches: House of Hope Presbyterian, St. Thomas More Catholic and St. Clement’s Episcopal. At each stop, a member of the congregation will take you behind the scenes. The tour will also include brief stops at other sites without disembarking. Departs from the Minnesota History Center. 9 a.m.-noon. FMI and tickets ($50/$40 MNHS members).