Steve Heckler is an excitable guy. Catch him on the day before the Twin Cities Jazz Festival begins – the festival he co-founded nearly 20 years ago and has led ever since as executive director – and you’ll run to keep up, even on the phone.

What started as a one-off event at Peavey Plaza in Minneapolis in 1999 has become a jam-packed, three-day blowout in St. Paul that draws 30,000-40,000 people to Mears Park and stages all over the Capitol City. This year’s festival features more than 300 artists in more than 130 performances in nearly 30 venues, ranging from outdoor stages to a chiropractic clinic. It’s all live, and it’s all free.

How has it stayed free? “Sponsors, grants and donations,” Heckler said in an interview Wednesday morning. “We’ve been lucky. We’ve gotten some really good supporters and really good grants. People donate anywhere from $5 to $20,000. That’s what keeps us going.”

But the main event by far is Saturday’s set by McCoy Tyner and Joshua Redman. Pianist Tyner is a jazz icon and living legend, NEA jazz master and former member of John Coltrane’s seminal quartet. Superstar saxophonist Redman is one of the most respected and in-demand players today.

How did this happen? “Since I was 15 years old, McCoy Tyner has been in my top five jazz musicians,” Heckler said. “I’ve loved his music, followed his gigs and seen him many times, including last year at the Dakota. I’ve wanted to book him but he’s never been available. He’s always been touring in Europe. This year, we reached out again. His drummer [and former Jazz Fest artistic director] Francesco Mela explained that we’d take care of him, and he agreed to do it. It’s incredible!” 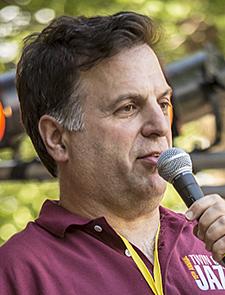 Why the pairing with Redman? “McCoy was originally coming here with his regular sax player, Gary Bartz. All of a sudden, Bartz wasn’t on the gig. Then McCoy’s manager called and told me, ‘Guess what! Joshua Redman is on the gig!’ I kind of went … OK! Wow! According to McCoy’s manager, Joshua has always wanted to do something with McCoy. They might have had a jam here and there, but nothing official. It just happened that the only open day for both of them was during the Twin Cities Jazz Festival. That was the only day that worked for them for this entire year. So this will be their first time playing together in public.”

Jazz Fest is a living, breathing thing, never (like jazz itself) the same twice. Heckler likes to mix it up, try a new stage here and a new idea there. In 2015, he presented Dr. John at the Saints Stadium. In 2016, he brought in singer-songwriter Michael Franti, whose music blends rap, reggae, pop and hip-hop with jazz influences, and set up a stage in Kellogg Park. This year, for the first time, the festival will fully expand to Thursday night, with a stellar line-up on the Mears Park stage and music in 13 other venues. And it will hew more closely to its jazz core.

Starting Friday, there will be a new stage on 5th St., across from the World of Beer, which opened last summer in St. Paul’s booming Lowertown. “I’ve always liked that street,” Heckler said. “It’s wide and easier for the audience to see. We’re calling it the Maker’s Mark Stage. Maker’s Mark will have a gated area serving specialized drinks there. This year, for the first time, you can enjoy a cocktail while you watch the music.

“We have another new stage on Exchange Street on Saturday, across from McNally-Smith and in front of the Presbyterian Homes. That came about because the residence contacted us. They said that a lot of their people are elderly and disabled and can’t navigate the main outdoor stages, and they wanted some jazz there, too.” 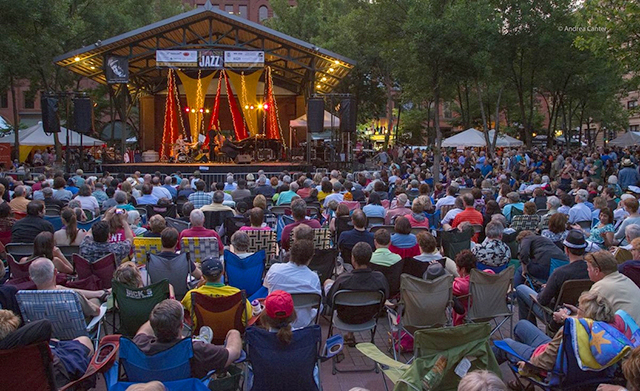 Photo by Andrea Canter
This year, the festival will fully expand to Thursday night, with a stellar line-up on the Mears Park stage and music in 13 other venues around town.

Why not the new Palace Theater on West 7th Place? “We tried. We were ready. We came pretty close to having a show there. It just didn’t come together this year.” Maybe next year.

We asked Heckler what he was personally most excited about, beyond the Tyner-Redman set. Being the ED, he can’t play favorites, but he made special mention of the Twin Cities’ Latin Jazz Orchestra and the JazzMN Orchestra. “One of my goals is to try to get as many musicians in as we can, financially and timewise on stage,” he said. “It’s difficult when you have X amount of slots and X amount of funds. But when you book a big band, you’re getting some of our top musicians performing at the festival, which I really like.”

Last year, Heckler created a booking committee of people who follow jazz locally, going out to clubs and keeping their ears to the ground. “Twenty years ago, I knew 80 percent of the jazz musicians. But there are so many now – young people who have picked it up, crossover musicians I might not know.

“Cameron Kinghorn is a prime example. He’s an insanely creative, fantastic jazz musician, but he’s incorporating other things, too. Finding those kinds of musicians, making sure they have a chance to show their art and talent, is critical to the survival of this festival. I can’t just keep booking what I think is cool. It’s not about me. It has never been about me. The survival of jazz requires us to reach out to different people, different styles. That’s the future of jazz.”

We had to ask about pianist Jon Weber, a festival stalwart who’ll hold court at Vieux Carré and lead the nightly jam sessions. “He just tried beeping in while we were talking!” Heckler said. “He showed up in 2000, at the very first festival. He was in town for a different event on the same weekend, a harmonica summit. I was so new at this that I made some errors in booking. I booked things incorrectly and at the wrong times and ended up with gaping holes in the festival. Two hour gaps! I asked Weber, ‘Can you come over and do a thing?’ He came over. Jack McDuff came down. Howard Levy, who was here for the harmonica summit, came down, and another two jazz harmonica players. They all played. Then there was a singer whose piano player didn’t show up – another miscommunication on my part. Jon sat in for that set, playing the most obscure stuff. The singer would call a song and he’d say, ‘What key?’

“I brought him back the next year to cover those kinds of things. Every year since, that’s what he’s been doing. I have to book him. I’ll jinx the whole festival if I don’t.”

Ask anyone who’s ever gone: The Twin Cities Jazz Festival is a blast. As Steve Heckler says, “Even if you think you don’t like jazz, this is a fun community event. There’s so much music going on in so many places.” For sure, see the headliners in Mears Park. This may be the only time Tyner and Redman play together. Blanchard, Anat Cohen and Emmet Cohen don’t come through the Twin Cities often enough, and Lyle now lives in Houston. Except for a performance last weekend at the American Swedish Institute, Stenmark has never played here before.

We’ve had issues with the festival’s website in the past, but the recent reboot is sleek, easy to navigate and full of useful information on all the artists, including the nearly 90 area artists and groups. Click any name under the 2017 Artists header (go here and scroll down) to read more about them and find out when and where they’re playing. There’s no Jazz Fest app, but the website works fine on your smartphone. Clicking a venue name will take you to a schedule of performances there, and a map. You can also pick up a printed program at the festival.

A complete schedule from start to finish is available in two versions: by venue and by time. You can plan, or you can just wander, hang out, and visit as many clubs and venues as you can. Most are within walking distance of Mears Park. Others are a ride away on the Green Line. Get a free MetroTransit pass on the Jazz Fest home page – and note that all downtown Minneapolis light rail stations except the US Bank Stadium Station will be closed for maintenance.