Starting tomorrow (Thursday, July 13) at the Southern Theater, four up-and-coming choreographers/collectives will take a leap forward in their careers. Last year, all were commissioned to make something for the 2017 Momentum: New Dance Works Festival. Chosen by a high-level panel of people from the Cowles Center, the Walker Art Center, the Southern, Movement Research (a center for new dance and performance in New York City) and other experts, they have spent the time since creating and refining, sharing with each other, getting and giving feedback.

Begun in 2001 by the Walker, the Southern, and Dance Today (now defunct), supported from the get-go by the Jerome Foundation, Momentum is a big reason Minnesota, of all places, is a national hub for contemporary dance. Anyone who follows dance will recognize most of these names, all former Momentum artists: Mathew Janczewski, Emily Johnson, Aparna Ramaswamy, Jason Noer, Morgan Thorson, BodyCartography Project, Karen Sherman, Chris Schlichting, Maia Maiden/Ellena Schoop, SuperGroup. Anyone who follows dance, or is curious about dance, will want to check out this year’s program, because these are people we’ll be watching and talking about in the future.

Michèle Steinwald has been Momentum’s program director and producer since 2006, when she joined the Walker as assistant curator for the performing arts, a position she held until the summer of 2013. We asked her to give us an overview of this year’s festival and some insights into the dance makers and their works.

“All these groups are termed ‘emerging’ and ‘early career’ artists,” Steinwald began, “but the series chooses artists that have a clear vision and voice. They’ve developed their own unique perspective. You can see that in their work. At the same time, these artists are chosen because they’re ready to push themselves to the next level. They’re hungry for opportunities, and you can see that richness in the work they’re presenting.”

“This piece is an amalgamation of Hollywood musicals. Very Busby-Berkeley, spectacular-show-business, set in the future. You’re watching it, you’re consuming it, and you also see how exhausting it is for the artists to perform at such high intensity. You’re enjoying it, but you’re complicit. This is a very sophisticated work that is critiquing consumption while giving you a buffet of delight. It’s very exciting.”

“BLAQ is a very new ensemble of African American women. They’ve put together their favorite things, their favorite people and their favorite songs. They’ll have food, and the bar will be open. This piece is about pleasure, and a safe space. They’ve created a structure that’s for themselves. ‘Bill: The Musikill,’ the first half of the show, is very much a performance for the crowd. ‘Taneber/BLAQ Wall Street’ is letting the crowd participate by enjoying the dancers enjoying.”

Next Thursday through Saturday (July 20-22):

“This piece is very imaginative, weaving together different fairy tales and fantasy narratives. Dark fairy tales. If you took all the fairy tales from ‘Red Riding Hood’ on down and cut them up, threw them into one big bag, pulled them out, glued them together and choreographed that – in some ways, that’s what you’ll see. You have these archetypal stories and characters – the witch, the dragon, the sorcerer, the mermaid. The characters are constantly morphing. Bodies are transforming in front of you. It almost feels like animation.”

“Darrius Strong trained at the U in modern dance and ballet, and he comes from a hip-hop background. His cast of dancers have different backgrounds – studio, contemporary dance, jazz, breakdance and hip hop. In this piece, they have been placed in an unfamiliar environment, and they’re looking to their connections with each other. No words are spoken, but it’s very narrative. You see them thinking about their situation and discovering the possibilities. It’s a futuristic setting, and he leaves it vague. You’re not sure if they’ve time-traveled or are on another planet. They’re seeking human connections and trying to relate to the new normal they’re in.”

Steinwald has seen the Twin Cities dance world evolve. “There used to be more overlap among the artists and their communities, but these artists come from distinct communities,” she said. “The way they have learned from each other, influenced each other, and supported their differences is heartwarming. And their pieces are great.”

Tonight (Wednesday, July 12) at a movie palace near you: Verdi’s “Nabucco.” James Levine conducts, and Plácido Domingo adds a new role to his Met repertoire (!) as the title character in Verdi’s early drama of ancient Babylon. Soprano Liudmyla Monastyrska is Nabucco’s daughter, Abigaille. This is a rebroadcast of the original “The Met: Live in HD” seen earlier this year. 7 p.m. Go here and enter your city or ZIP to find a theater. 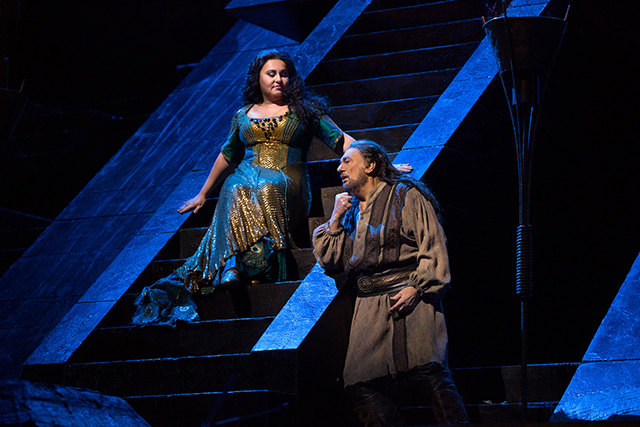 Photo by Marty Sohl/Metropolitan Opera
Liudmyla Monastyrska as Abigaille and Plácido Domingo in the title role of Verdi’s “Nabucco.”

Friday at the American Swedish Institute: “First Look – Still Life: Karin Broos” Exhibition Preview Party. Her photorealistic paintings of women, family, forests and lakes, light and reflections have made Broos one of Sweden’s most famous artists. Organized by the Prins Eugens Waldemarsudde art museum in Stockholm, “Still Life” is Broos’ first show in the U.S., and it’s mostly new work: about 55 large-scale paintings, many never before shown publicly, displayed in the ASI’s Osher Gallery and castle. (From here, it will travel to Chicago’s Swedish American Museum and Washington, DC’s House of Sweden.) The preview party includes a chance to meet Broos and her daughter, filmmaker Sara Broos; music from local folk duo Crow Call; and interactive activities led by the artist collective Conspiracy of Strange Girls. Appetizers and beverages from FIKA will be available for purchase. 7-10 p.m. FMI and tickets ($15/20). Exhibition closes Oct. 29. 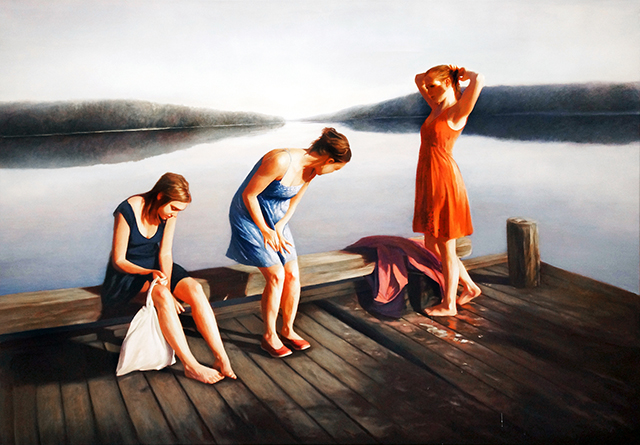 Opens Friday at the Lyric Arts Main Street Stage: “Anything Goes.” The Anoka theater ends its 2016-17 season with the 1930s song-and-dance escapist romance penned by P.G. Wodehouse and Cole Porter. Revived on Broadway in 2011, it won a Tony. Songs include “You’re the Top,” “I Get a Kick Out of You,” and the famous title song (“In olden days, a glimpse of stocking was looked on as something shocking …”). Well, that was definitely before cable TV.  Directed by Scott Ford, with music direction by Mary Cay Stone and choreography by Lauri Kraft. 7:30 p.m. FMI and tickets ($18-32). Ends Aug. 6.

Saturday at Midway Contemporary Art: Monster Drawing Rally nbr. 10. Imagine dozens of artists gathered around cafeteria tables, drawing as fast as they can; as soon as they finish a drawing, someone grabs it and hangs it on a wall, where it’s immediately for sale (first come, first served). Watch as they draw; if you like how something is turning out, follow it to the wall and claim it. All drawings are $35. All proceeds benefit programing at Midway Contemporary Art, a Twin Cities nonprofit arts organization started by artists in 2001.  6-11 p.m. Free and open to the public; family-friendly. Drawing rounds begin at 6, 7 and 8 p.m. Cash bar and outdoor BBQ. Music by Amalia Nicholson. FMI including the artists’ names.

Momentum Festival takes dance to the next level; the Walker throws a party