Minneapolis-born, Frogtown-based artist Seitu Jones isn’t sure what he’ll do with the $50,000 he received as winner of this year’s McKnight Distinguished Artist Award. Maybe he’ll downsize and build a smaller studio. He’ll travel to Africa later this year, but those plans were in place before the award. Some of the money will go toward the future, when he’s not working quite so much. At the moment, he has a lot on his mind: the railing he designed for the new 40th Street pedestrian bridge over I-35W South, the new installation he’s creating with fellow St. Paul artist Ta-Coumba T. Aiken for the Minneapolis Sculpture Garden, and other projects.

Jones is all kinds of visual artist, working with paint, wood, clay, glass, steel, theater sets, even plant material. Much of his work is public art on a grand scale: bridges, murals, sculptures, walls, stops along the Green Line, and once, in 2014, a meal for 2,000 people that stretched for blocks down the middle of Victoria Street in St. Paul. Inspired by themes of equity, underscored always by the belief that you should leave your community more beautiful than you found it, he has woven his public art into the Twin Cities, and the Twin Cities into his public art. This is truly his home. “With the birth of my grandkids,” he said, “my family has been in Minnesota for six generations.”

We spoke Saturday in Rev. Dr. Martin Luther King, Jr. Park, on a bench near “Freedom Form #2,” a sculpture by New York artist Daniel LaRue Johnson honoring Dr. King. To the east was a playing field, cut down in size when I-35W was built in the 1960s. To the south was the long hill Jones used to slide down in winter as a child. To the north was a stage where people prayed, preached, spoke poems, rapped and sang. The occasion was the annual “Celebrate Our Beloved Community” event, named for King’s idea of a society based on justice, equal opportunity and love.

We started out talking about creative placemaking – the term used today to describe the kind of work Jones does – but the conversation turned quickly to love.

Seitu Jones: I was doing “placemaking” long before they called it that. I’ve been creating space, and trying to manipulate space, and working with folks to change and transform space for a while. I’ve been around long enough to see different movements come and go. I was around for “multiculturalism.” I wrote a piece in Public Art Review years ago about “muralism.” That came and went so fast a lot of folks never even heard it. In all honesty and bluntness, I wrestle with “placemaking.” It’s one of those terms that’s at the precipice of being overused.

MinnPost: What about the idea of leaving your community more beautiful than you found it?

SJ: That was one of the tenets of the Black Cultural Nationalism movement, and that’s specifically where I got it from, but I also picked it up from a host of other places – from the Black Panther Party, the Socialist Workers Party, the Nation of Islam. I was a young man searching for meaning and looking at all these different philosophies, studying them and picking out different pieces to build my life around. I was fortunate to live at a time where I was drawing equally from the Black Panther Party and Jimi Hendrix.

Over the last few years, I’ve done some more digging around the “Beloved Community” idea, and looking at the roots of it, and where Martin Luther King got it from. One of the terms we don’t use a lot as artists is “love.” We shouldn’t be ashamed to talk about the power of love. As corny as that may sound, as clichéd as that may be, it really has this power that we should all draw from.

Love and power need to go together. Martin Luther King talked about the relationship of love and power, and said that our philosophers got it wrong when they looked at power as a bad word, especially in contemporary times. And what he went on to say was love, without power, is anemic. And power without love is reckless and abusive. You need both of those things together.

MP: It feels like, in this moment, we have power without love.

SJ: Exactly. Absolutely. I didn’t want to go there, but we’re there. We are living now in a toxic environment where we see a manifestation of power without love, without any semblance of grace or empathy or sympathy. None of that is there in the current administration, and we have to put pressure on it. I heard somebody yesterday describe how over these last few years, we have been in this kind of holding pattern, where we haven’t taken our responsibility as citizens as seriously as we should have been doing. Otherwise we probably wouldn’t be where we are right now. Art is part of it. This is all part of it. 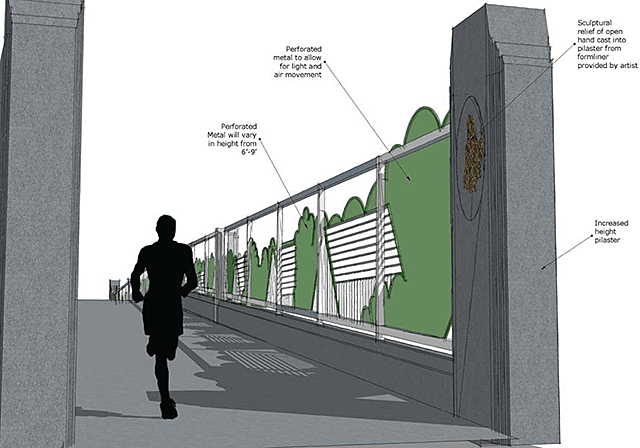 Courtesy of Seitu Jones and the Minneapolis Arts Commission
A rendering of the 40th Street Pedestrian Bridge concept.

MP: What was your first experience with art that you can remember?

SJ: I was always drawing. My father was an artist and a painter. I had a whole slew of aunties who could sew without patterns. I had an uncle who was a painter. And a great-aunt who was a painter. I’m so fortunate to have their work around me as inspiration still. So I grew up in a family that was very creative.

My father gave up on art as a career because of the discrimination at that time, and the widespread racism. The folks he went to school with ended up getting jobs he had also applied for, and he finally gave up when somebody told him, “We don’t hire niggers.” The flipside was, Dad bought a printing press and printed cards for people in our basement. He was also a sign painter who would paint signs for a lot of the black businesses here on the south side – the barbecue joints, the barbershops. I would sneak and play with his brushes. He became my greatest patron.

Art really burgeoned with me at Field Elementary School, not too far from here. At that time, in the 1950s, each teacher taught art. I had a teacher in sixth grade who asked me to help her make Christmas cards. I remember sitting at her desk doing that while all the other students were working on math. And I thought, “Ah, there’s a reward for this.” There was never a time since when I wanted to be anything other than an artist.

MP: What was your first awareness that public art was a good thing?

SJ: My father’s family had been here for a long time, but my mother’s family was in Chicago. So every year, my sister and I would get shipped off to Chicago to spend a big chunk of the summer with grandparents, great-grandparents, aunts, uncles and cousins. And we’d go down there a couple times a year. Before I graduated from high school – I went to Washburn – my grandfather, on one of our visits to Chicago, took me to see the “Wall of Respect” on 43rd and Langley. That was the beginning of the modern mural movement. Just seeing these black figures done large-scale – that blew my mind. From then on, I saw the power of the museum of the streets. That was my turning point to want to create large-scale work.

MP: What, to your mind, makes a good piece of public art?

SJ: I think it should speak to its site, and speak to the social, cultural, physical and historic context of the site. For a piece to be really successful, it has to succeed with at least one of those elements. I work to make pieces that can be a source of neighborhood pride, so I can inform and hopefully inspire people.

I have done a number of pieces, and people ask me what’s my favorite piece. My response is always, “It’s the piece I’m working on right now.” Right now, this piece [the 40th Street Pedestrian Bridge] is really important to me, especially here, in this neighborhood. This is a return to the old homeland. I can’t tell you how many times I hit trees trying to get down the sliding hill. This is the field where I played football, before the freeway came through and took out a big chunk of it. I used to swim in the wading pools down here. So this is a grand homecoming. This is a way I can give back to my community.