Shá Cage, a fierce force of nature on the Twin Cities arts scene, has been strict about the holidays up to now. “I’ve never done a holiday play. Never. I don’t act in the holidays because I’m such a family person. It’s a sacred time for us to reconnect and commune with our family from the South, [husband E.G. Bailey’s] family from Africa, our family in the States.”

So Cage wrote a holiday play for families, kids and people of color. A play with puppets, poetry, spoken word, music and dance. And stilts.

“Khephra: A Hip Hop Holiday Story” starts tonight at Open Eye Figure Theatre. The title character, a young girl, is named for an Egyptian god of transformation and evolution. In the play, Khephra and her mother move from Africa to the U.S. after Khephra’s father dies. In this strange new place, the girl finds her true voice through poetry and hip-hop.

Cage and performers Alissa Paris and Destiny Anderson inhabit different characters and manipulate objects to tell the story, which is directed by Bailey, set against scenic designs by Ta-Coumba Aiken and performed to music by Rico Mendez.

Backing up a bit, Cage’s most recent role was as Lady Capulet at the Guthrie in “Romeo and Juliet.” Before then, she was the King of France in “King Lear,” also at the Guthrie; the lead in “The Liar” at Park Square, another traditionally male role; and a fighter pilot in Frank Theatre’s “Grounded,” for which she won an Ivey Award. She wrote and starred in four solo plays: “NWord,” “#sayhername,” “U/G/L/Y” and “Testify.” She and Bailey created a short film, “New Neighbors,” which went to Sundance, has been winning awards and just passed the 100 film festivals mark. “It literally has a life of its own,” she said. “We’re about to add another room to our house and put ‘New Neighbors’ there.”

Plus Cage and Bailey are raising two young sons, ages 6 and 8. They were impetus and inspiration for “Khephra.” Cage explained, “I’ve been rethinking how I create work, and who I create it for. I wanted to make sure I’m bringing the boys along. This show is a little bit of what-if. What if we continue to do the show? What if they work on it?”

We spoke with Cage on Wednesday by phone, shortly after she dropped off her boys at school.

Shá Cage: As I continue to get older in my craft and my body, I’m forever exploring new ways to storytell. I’ve always loved puppetry. I’ve integrated shadow puppetry into most of my own plays. Puppets are phenomenal. They tell stories in a way that humans can’t. They create a new portal for people to see into the world you’re inviting them into. I selfishly want to learn more about puppetry and get better at it. My kids love it, so that was an immediate yes. Open Eye – that’s their thing. They do puppetry. It made so much sense when they said yes to presenting the work.

MP: And you get to work with Michael Sommers, a god of puppetry. [Sommers and his wife, Susan Haas, are the founders and artistic directors of Open Eye.]

SC: I think he’s a magic man. I love everything about him – his approach, his quiet clarity and his fun-loving energy. And his skill!

MP: What’s something important you have learned from him during “Khephra”?

SC: The importance of simplifying. Sometimes, when you’re telling an adult story, there’s the desire in your body to do more, say more. What I’ve learned from Michael, although I haven’t mastered it yet, is that you don’t have to do as much. When you distill a moment or a movement, even if it’s just a turn of the head, it draws focus in a way that’s much more clear than bouncing all over the place.

MP: How personal is this play for you?

SC: Every piece I’ve created is quite personal. You don’t realize that until you get up on the stage and you’re like, “Oh my god! Why am I crying? Why can’t I memorize this? Why do I want to keep a distance here?”

Khephra comes out of a tradition of storytelling in Africa, to poetry in the United States, to spoken word, to rap. That’s my own journey. Coming out of a family and community that told stories. Celebrated as a poet early on in my life. Falling in love with spoken word. Always toeing the line between spoken word and hip-hop. So lots of it is very personal. 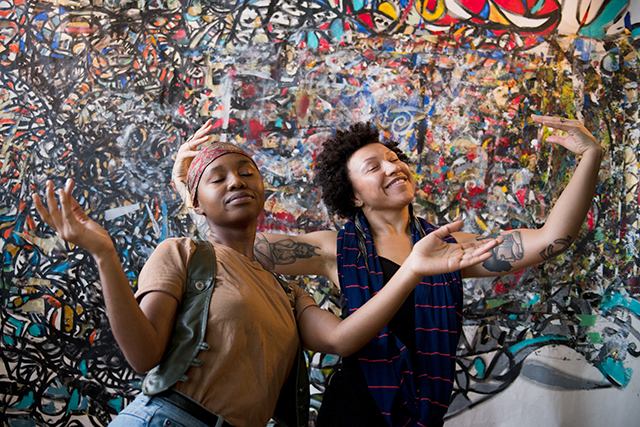 I think [the play] will resonate with any theater-goer or community member. It’s the universal theme of leaving home, any home, and going to another home. What do you leave behind? What do you take with you? Not just objects, but in your body, your spirit, your energy. What does letting go mean? Does it really mean letting go? How do you acclimate to a culture that feels incredibly foreign to you? How do you find your voice? Particularly as a woman. Can we pinpoint when we became strong, when we found our voice and our power?

MP: Is the whole play written in poetry?

MP: Before each performance, there’s something called an Art-Shop. Talk about those.

SC: Giving folks multiple ways to engage with the work is how you create community. In conversations with [Open Eye associate director] Joel Sass and Susan Haas, we collectively came up with the idea of adding workshops as soon as the doors open. They’re short. It gives you a taste, a precursor to elements in the show.

Ana Laura Juarez is curating the micro-exhibition on the wall, and she’s doing a visual arts workshop. I’m doing a spoken word one, where people can play with words and get the concept of how spoken word is different from traditional poetry. Destiny Anderson is doing “Move Somethin’,” a few of the dances and movements in the piece. Jamela Pettiford is doing “So You Think You Can Sing?” She’s going to play around with some of the sounds.

We have sing-alongs in the play, and we have no idea if people are going to step into singing with us. This is Minnesota! Sometimes you can be out there in a boat all by yourself. We are going to trust and believe that people are going to come for a party. The kids will get a chance to sing “Rudolph.” “This Christmas” will be in there, and “Elijah Rock.”

We’ve remixed “The 12 Days of Christmas” to “The 12 Days of African Christmas.” We’ve been singing it with the boys. They’re tickled. In some ways, I’ve already succeeded in one of my goals: to create something that will make them smile. It will be wonderful to have other kids and families, and folks of color, come out and enjoy it in the same way.