The Jungle Theater has received the largest operating grant in its history, and it’s because Sarah Rasmussen is its artistic director. Rasmussen is one of five women ADs in professional theaters across the U.S. who will each receive $250,000 from the BOLD Theater Women’s Leadership Circle. The other four members of the first BOLD cohort run theaters in Atlanta, Houston, New York and White River Junction, Vermont. There’s a good chance the grants will be repeated for two more years, for a total of $750K to each theater.

Women hold just 20 percent of artistic leadership positions in the American regional theater, according to a recent study by Wellesley Centers for Women. The BOLD Circle aims to create a network of women ADs and empower them to address the issues preventing women from advancing in theater leadership.

In a statement, Rasmussen called the grant “transformative for the Jungle and for me.” Her plans include commissioning more new work by women, hiring a female associate director and deepening partnerships with organizations such as the Playwrights’ Center.

Rasmussen joined the Jungle in summer 2015. The first play of her first season was Shakespeare’s “The Two Gentlemen of Verona” with an all-female cast. It’s been exciting to watch the Jungle become more diverse, inclusive and edgy under her direction. A lot of people seem to think so; the theater played to 92 percent capacity in 2017 and ended the year in the black, with many new donors.

Next up: Jonatha Brooke’s one-woman show “My Mother Has 4 Noses,” followed by “The Wolves,” in which nine young women will make their Jungle debuts, and “Lady Day at Emerson’s Bar and Grill” starring Thomasina Petrus as Billie Holiday. In the works: Rasmussen’s first commission, an adaptation of “Little Women” by Kate Hamill.

“Sunset” is a word with multiple meanings. As a noun, it’s a rosy glow on the horizon. As a verb, it means to lapse, come to an end – or close forever.

After 32 years, Patrick’s Cabaret will sunset this summer, Executive Artistic Director Scott Artley announced Tuesday in an email. Patrick’s has been part of the Twin Cities theater scene since 1986, when it was founded by Patrick Scully as a safe, accessible performance platform for artists of color, LGBT/queer-identified artists and those with disabilities. After a nomadic start, the Cabaret moved into an old firehouse on Minnehaha Avenue in 1999. In March 2016 the landlord terminated the lease and gave Patrick’s until the end of May to vacate.

Nomadic once more, Patrick’s officed at Intermedia Arts and performed at venues throughout the city. Meanwhile, it was transforming its identity and shifting its focus, defining itself as “a queer-led performance art incubator supporting the growth and development of artists on the edge of culture,” specifically “artists of color, with disabilities, and with queer and trans identities.” 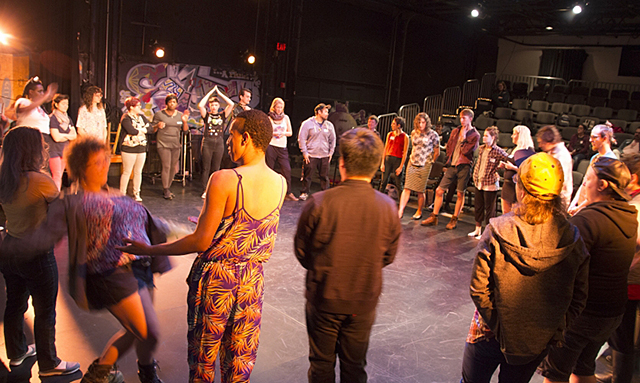 Without a permanent venue and the flexible earned income once generated through venue rentals, the writing was on the wall. “In less than a year,” Artley wrote, “we will be unable to raise the financial resources necessary to sustain the organization’s work. Much less conduct a capital campaign to secure a new building on a realistic timeline.”

This sunset will be slow and no doubt colorful. The spring season, announced earlier, will go on as planned.

Now at the Goldstein Museum of Design: “Storied Lives: Women & Their Wardrobes.” What did prominent 20th-century Twin Cities career women wear to work, and why? This fascinating exhibit looks at the workday wardrobes of three women whose jobs ranged from occupational therapist to the president of Harold (a storied clothier on Nicollet Mall) and a Twin Cities journalist for Women’s Wear Daily. Think Oscar de la Renta and YSL, for starters. Gallery hours Tuesdays-Fridays, 10 a.m.-5 p.m., weekends 1:30-4:30 p.m. Free admission. 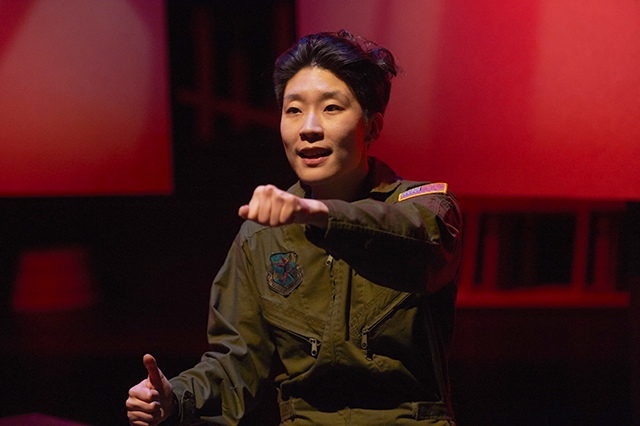 Photo by Tony Nelson
Audrey Park in a scene from “Grounded.”

Tonight (Thursday, Feb. 1) at the Reif Center in Grand Rapids: Opening performance for Frank Theatre’s “Grounded.” In George Brant’s powerful one-woman play, a hotshot fighter pilot takes a desk job when her career in the sky is interrupted by an unplanned pregnancy. By day, she operates drones in Afghanistan from a windowless trailer outside of Las Vegas; by night, she returns home to her family. Sha Cage starred in Frank’s first production in 2016 and won an Ivey. The new staging, with Audrey Park as the Pilot, will start in Grand Rapids and Duluth (Feb. 1-3), move to the Perpich Center for Arts Education in Golden Valley (Feb. 8-18), and end at the Rochester Civic Theatre (Feb. 24). For ages 16 and up. FMI including schedule and tickets ($25/20)

Friday at the Phoenix: Opening night for “The Toxic Avenger.” Take your mind off of absolutely everything. Minneapolis Musical Theatre (which did a great job with “Carrie: The Musical” in 2013) has taken on the Off-Broadway rock musical based on Lloyd Kaufman’s 1984 cult horror flick. With book and lyrics by Joe DiPietro, music and lyrics by David Bryan (Bon Jovi), it looks to be dumb, silly fun. DiPietro and Bryan also collaborated on “Memphis.” 7:30 p.m. FMI and tickets ($30/24/18). Ends Feb. 25.

Diana Krall at the Ordway on Tuesday, June 12. The multiple Grammy-winning jazz pianist and singer has been touring the world with her latest album, “Turn Up the Quiet,” her last with longtime mentor and collaborator Tommy LiPuma. It’s a cool, elegant beauty, full of classic tunes like “Isn’t It Romantic,” “Night and Day” and “Moonglow.” No matter how big the room, how large the crowd, a Diana Krall concert feels like she’s singing in your ear. 7:30 p.m. FMI and tickets (start at $68, subject to change).