Minnesota-born writer Raymond Strom’s debut novel is set in 1997, but except for mentions of Oklahoma City bomber Timothy McVeigh, it could be 2019. The despair of a dying small town, the rise of white nationalism, the devastation of drugs (meth, not yet opioids), family trauma, fecklessness, bigotry, the search for sexual identity – these are today’s news, too. That Strom puts them all in the same story makes “Northern Lights” a tough read in spots. There were times when we thought – enough. We don’t have to read this book. But then we picked it up again, because we cared about the long-haired, non-binary, not-quite-lost central character, Shane Stephenson. 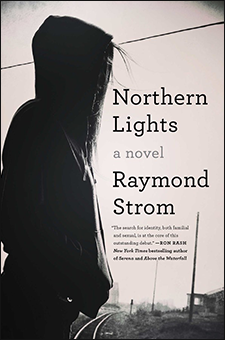 Shane’s father is dead and the uncle he was living with has just kicked him out, on the day of his high school graduation. (“Returning home in my cap and gown I found a note from my uncle next to my empty backpack. ‘You can fill this up, but that’s it. Be gone before I return.’”) Shane will start at the U of M in the fall – that’s all been arranged, though we don’t learn how or who’s paying – but he’s facing a blank-slate summer. Grabbing some clothes, his old Nintendo and the only cash he has, he goes looking for the mother who abandoned him when he was a child. Her last known address: Holm, a town in northern Minnesota, where meth is easy to score, a Walmart has emptied Main Street, and people have nothing to do but get high.

Shane finds a room (the same room his mother lived in a year earlier), a job washing dishes at a café, and a brilliant, beautiful young graffiti artist who paints HOPE on boxcars and buildings. He meets Sven Svenson, whose belt buckle is a Confederate flag. When Svenson takes Shane for a woman, then realizes his mistake, Shane has his first real enemy. Holm is not a town where being gay, or looking gay, or trying to figure out if you’re gay is popular. It’s evident early on that this coming-of-age tale can’t end well. It doesn’t, but there’s hope.

Blurbs and reviews are suggesting parallels between Strom and Richard Ford, early Hemingway, Denis Johnson and S.E. Hinton. We don’t know about that, but we do know that Strom’s writing is plainspoken and without airs, and Shane gets under your skin. It’s like he’s drawn with a fine-point pencil. His innocence and vulnerability are touching, his optimism and lack of bitterness almost saintly. His observations of small things – light and shadows on the wall of his room, two squirrels playing with a stick – are meditations in a bleak landscape. And his courage is tremendous. Because of Shane, this character Strom created, you might look differently at other scruffy, seemingly aimless teens you see.

Born in Hibbing, Strom moved often as a child, living in small towns across the Midwest. Today he’s an academic adviser at the City College of New York, where he earned his MFA. His first book is out on Simon & Schuster, a splashy start. He’ll make two stops in Minnesota next week: Wednesday, Feb. 27, at SubText in St. Paul and Thursday, Feb. 28, at Magers & Quinn in Minneapolis. Readings at 7 p.m., followed by book signings.

Friday through Sunday at the Ordway Concert Hall: The St. Paul Chamber Orchestra’s Tapestry19: Reflections on Home. The SPCO’s first Tapestry festival concludes with two more world premieres exploring the meaning and the experience of home. SPCO composer-in-residence Lembit Beecher’s “Say Home” uses samples from nearly 50 interview recordings of Twin Cities community members and newly commissioned poetry by University of St. Thomas professor Chris Santiago. Seventeen-year-old Maya Miro Johnson’s “wherever you go, there you are” uses an adventurous sound palette to reflect on the idea of home. The concert will also include works by Mendelssohn and Haydn. 8 p.m. Friday and Saturday, 2 p.m. Sunday. FMI and tickets ($12-50, kids and students free). Sunday’s concert will be live streamed.

Sunday at Orchestra Hall: VocalEssence Witness: Yet They Persist. We owe one to Sen. Mitch McConnell, whose attempt to shame Sen. Elizabeth Warren with “Nevertheless, she persisted” gave women a new battle cry. This year’s Witness concert – VocalEssence’s annual celebration of great African-Americans – spotlights the persistence of women and the power of music to make positive change. Rep. Ilhan Omar will be there, and Minneapolis Council Member Andrea Jenkins, and former Minneapolis Mayor Sharon Sayles Belton. Music will be made by Atlanta’s Spelman College Glee Club, the VocalEssence Singers of This Age (SOTA) and the 130-member VocalEssence chorus. Associate conductor G. Phillip Shoultz III promises to “fill Orchestra Hall with songs of progress and protest, songs that bring our community together, making this a better place to live in.” 4 p.m. FMI and tickets ($10-40); 612-371-5656. Pre-concert talk at 3 p.m. Here’s a Spelman highlights video.

Sunday at Macalester’s Mairs Concert Hall: Lera Auerbach. Among the many stellar pianists the Chopin Society has brought to the Twin Cities, Russian-born Lera Auerbach is an outlier. Not only is she a pianist, she’s also a prolific poet (in Russian and English), visual artist (paintings, sculptures, drawings), playwright, librettist, author, and composer of more than 100 works for opera, ballet, orchestral, solo and instrumental music. A true polymath, she’ll play Mussorgsky’s “Pictures at an Exhibition” followed by her own “Labyrinth for Piano,” inspired by Mussorgsky, which premiered last year in San Francisco to a long standing ovation and rapturous reviews. 3 p.m. FMI and tickets ($30/25/15).

Monday at the Ordway:  Joyce DiDonato. The two-time Grammy-winning superstar soprano is out with her latest album, “Songplay.” Although it has been described as a “jazz-Baroque hybrid,” don’t be alarmed. This is not the well-intentioned but occasionally sad foray into jazz that genre-crossing sopranos have been known to take. This is Joyce DiDonato using her prodigious talents – and a splendid jazz quintet led by pianist and arranger Craig Terry – to prove that she can sing anything she pleases, so there. When their version of Vivaldi’s “Col piacer della mia feda” from “Arsilda, regina di Ponto” takes a hard turn into jazz, and she shares a few high notes with trumpeter Charlie Porter, you know you’re hearing something new and brilliant and thrilling. We’ll admit we were a little reluctant to dip into “Songplay” – what if we hated it? – but that was dumb. With Terry, Porter, Chuck Israels on double bass, Jimmy Madison on drums and Lautaro Greco on bandoneon. 7:30 p.m. Monday. FMI and tickets ($34-73).