How can two actors play seven men, a mother, a stepmother, a daughter, a huntsman, a servant, a prince and a talking magic mirror? If the actors are Joy Dolo and Dean Holt, no problem. Before “Snow White,” which the Children’s Theater Company opened over the weekend, they’ve done this sort of thing before: in last spring’s “The Hobbit,” a play with five actors, a boatload of characters and armies of elves, dwarves and goblins. (There Dolo played several characters and Holt only one, but if they had needed Holt to take on a few dozen more, he could have.)

Along with Blackout Improv co-founder Dolo and longtime CTC company member Holt, “Snow White” and “The Hobbit” have something else in common: British playwright and director Greg Banks, who shines at adapting big stories for small casts. His other CTC productions include “Huck Finn” (three actors), “Pinocchio” (four) and “The Jungle Book” (five).

Perched high at the back of the stage in the roots of an upside-down tree, CTC composer and sound designer/musician Victor Zupanc provides the music, sound effects and an occasional wave.

The play is a whirl of movement and words. Dolo and Holt change characters with lightning speed, tying on a skirt, throwing a lacy cloth over their shoulders, raising or lowering the brim of a hat, altering their posture, voice, or facial expression. And it’s all so seamless. We can’t begin to grasp how they keep their characters straight (14 in all), remember their many lines and run around the stage like maniacs without crashing into each other or collapsing in tears. Watching them do what they do is jaw-dropping amazing.


Don’t worry that your little ones will be lost or confused. A bit of explaining at the start prepares even very young children for what they’re about to see. As Holt frets aloud that “the others” haven’t yet arrived, Dolo says, “We can tell the story on our own!” When he insists, “We have to wait!” she counters, “I think they want us to start right now!” And kids in the audience yell out, “Yeah! Now!”

If you haven’t been to a play at the Children’s Theatre, the audience is a big part of the fun. There’s a lot of squirming and bouncing, standing up and sitting down, punctuated by frequent potty breaks. When the Prince (played briefly by Dolo) kissed Snow White (briefly Holt) in Sunday afternoon’s performance, the crowd broke out in “ewwwwwws!” Banks knows his audience loves words like “toot” and “poop” and uses them – only once. The script is full of knock-knock jokes and other age-appropriate hilarity. It’s also smart enough for grown-ups to appreciate.

Presented on the Cargill Stage (CTC’s first-floor black box) on a long, narrow super-thrust with the audience on three sides, Banks’ play – a CTC commission and a world premiere – is a revisionist version of the Grimms’ fairy tale. The stepmother is still wicked and vain, with murder in her hard, dark heart. But the prince is a pompous buffoon, not a romantic hero, and Snow White is no Disney princess. She doesn’t care a fig about castles or getting married. What matters to her are her friends, the beauty of nature, the stars in the sky, and birds.

Banks has given the story a surprising and satisfying new ending. “Snow White” runs 75 minutes with no intermission. FMI and tickets ($15-56). Closes Dec. 8.

Catching up on artsy news

While we were on break, the arts galloped on, and much arts-related news was made. In case you missed something you care about, we’ll update you over the next few days. In brief:

The Soap Factory will close at the end of the year. As recently as March, we wrote, “The Soap Factory hopes to reopen on Labor Day.” Sadly, that won’t happen. The past four years have been a rollercoaster – a big grant lost, budgeting woes, grand plans for a multimillion-dollar renovation (with a restaurant facing the river), staff transitions, terminations and turnovers, debt, a sheriff’s sale, plans to move into the basement, and finally this headline on a press release: “Soap Factory to Cease Operations.”


The Soap had a 30-year run that will long be remembered. Great things happened there. The organization will be dissolved by Dec. 31. The historical records have been donated to the University of Minnesota Archives. The 130-year-old building will be redeveloped as commercial office space.

Mia has a new director and president. The New York Times and the Minneapolis Star Tribune both broke the news on Tuesday, Oct. 1. Katherine Crawford Luber, who has led the San Antonio Museum of Art (SAMA) for the past eight years, will succeed Kaywin Feldman as leader of the Minneapolis Institute of Art. Feldman left in March to become the director of the National Gallery of Art in Washington, D.C.

Luber comes to Mia bearing impressive art credentials: a doctorate in art history from Bryn Mawr, experience at the Metropolitan Museum of Art in New York and the Philadelphia Museum, and curatorship of important exhibitions. She also brings business savvy. Luber has an MBA from Johns Hopkins and launched, managed and sold a successful start-up.

During her years at SAMA, annual attendance doubled, the number of member households tripled, the museum received more than $42 million in major gifts and its profile rose nationally and internationally. As reported by the Star Tribune, SAMA in 2018 had an $11 million budget, 82 full-time employees, 30,000 works and 132,000 visitors. Mia had a $35 million budget, a staff of 250, more than 90,000 works and 700,000 visitors.

In September, Mia’s trustees approved a master plan for the museum by London-based David Chipperfield Architects. As reported by the New York Times, Luber will implement the plan and run the capital campaign to finance the renovations.

Luber will start in her new position on Jan. 2.

The Walker has a new chief curator. On Jan 6, Henriette Huldisch will step into a role at the Walker Art Center that has been vacant since 2015: chief curator. She will also be the Walker’s director of curatorial affairs.

Huldisch, a native of Hamburg, Germany, is currently director of exhibitions and curator at Boston’s List Visual Arts Center, the contemporary art museum at MIT. She has organized several group and solo exhibitions there since her arrival in 2014. Previously Huldisch worked at the Whitney and Hamburger Bahnhof ­— Museum for Contemporary Art — Berlin and was visiting curator at Cornerhouse, an international center for contemporary visual arts and independent film in Manchester, England.

The Walker’s most recent chief curator was Darsie Alexander. When she left in 2015, Fionn Meade took over her role, but as artistic director, a newly created position. Meade resigned in Jan. 2017. 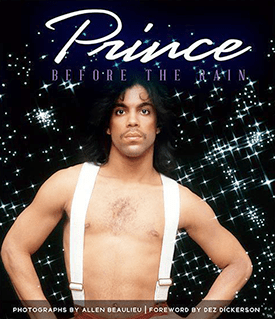 Now at the Minnesota History Center: “Prince: Before the Rain.” Minnesota photographer Allen Beaulieu captured Prince’s trajectory from rising star to superstardom. This exhibit includes album cover outtakes, live performance shots and behind-the-scenes candids of the Purple One taken from the late 1970s into the early 1980s. FMI and tickets ($12 adults; includes all special exhibits and galleries). Closes May 3, 2020.

Now at the Film Society’s St. Anthony Main Theatre: “Memory: The Origins of Alien.” Except for “Aliens” (1986), the sequels have been terrible. James Cameron has been hinting about another one, and we hope he’s not serious. (Build another submersible instead!) Ridley Scott’s original “Alien” (1979) turned science fiction on its head, giving us plenty of grisly scenes, a terrifying creature and a badass heroine. This documentary’s director, Alexandre O. Philippe, also brought us “78/52: Hitchcock’s Shower Scene.” FMI including trailer, times and tickets ($9.50). Ends Oct. 10.


Wednesday through Sunday at Theater Latté Da’s Ritz Theater: “Chicago.” Critics are loving it. We haven’t seen it yet, but we’re going soon. Four performances have been added. Try to get a seat on stage. Arrive early for live pre-show music; starts 30 min. before each performance, and the Ritz lobby is cozy and convivial. 7:30 p.m.; also 2 p.m. Saturdays; 2 p.m. and 7 p.m. Sundays. FMI and tickets (start at $33). Closes Nov. 3.

Thursday at the Anoka County Library: Club Book: Dacre Stoker. He’s the great grand-nephew of Bram Stoker, an expert on all things “Dracula” and manager of his famous ancestor’s estate. He’s written a sequel, “Dracula: The Undead,” built on Bram Stoker’s handwritten notes, and coauthored a prequel, “Dracul,” with Bram as the central protagonist. For fans of “Dracula,” this couldn’t be more perfect. 7 p.m. FMI. Free. If you miss the in-person event, you can catch the podcast a few days later.