Bao Phi was 3 months old when his family fled Vietnam in 1975. Here’s what he told the audience at a poetry reading in 2017:

The regime that my parents were fleeing from rolled tanks and shot rockets and mortars into Saigon as we fled … All this stuff was happening – bombings, explosions, utter chaos, people dying – and I was a quiet baby in my family’s arms as we tried to escape … [I became] the loudmouth kid in high school who started doing poetry and never stopped.

Phi’s family settled in south Minneapolis in the Phillips neighborhood, where Phi grew up during the American Indian Movement (AIM). “There was no guidebook for a Vietnamese kid being raised in Phillips,” he has said. A self-described “bookish nerd kid,” he found his safe spot at the Franklin Avenue Library.

After graduating from South High School, he attended Macalester College on a full scholarship. He earned his degree in English and got his first taste of Asian-American studies from a Japanese-American chemistry teacher. He worked various jobs before landing a position as receptionist at the Loft Literary Center. Today he’s the program director of events and awards. He is also a single co-parent of 10-year-old daughter Sông, who splits her time between Phi and her mother.

A performance poet since age 16, Phi is a two-time Minnesota Grand Slam champion and a National Poetry Slam finalist. He has been named Best Spoken Word Artist, Best Author, Artist of the Year, Author of the Year and Urban Griots Artist of the Year. His poems and essays have been widely published, and he is the author of four books so far: two poetry collections published by Coffee House Press, “Sông I Sing” (2011) and “Thousand Star Hotel” (2017), and two children’s picture books published by Capstone, “A Different Pond” (2017) and “My Footprints” (2019).

“A Different Pond” won multiple awards, including a Caldecott Honor and a Minnesota Book Award. It was adapted for a play that would have had its world premiere this month at Stages Theatre Company, except COVID.

We spoke by phone on Sunday afternoon. This conversation has been edited and condensed.

MinnPost: How are you and Sông doing during the pandemic?

Bao Phi: My daughter likes distance learning. If anything, I’m a little nervous about getting her to go back [to school]. She has remarked that she misses seeing some of her friends and classmates, but she really likes being at home and learning at her own pace.

She was diagnosed last year as being on the autism spectrum. Sometimes it’s a challenge for them to negotiate some of the social rules and cues. At home, it’s just much easier for her. [At school], she expels a lot of energy fitting in and doing what she needs to so she doesn’t stick out. Which is basically like my childhood!

MP: What did your year look like before everything closed down?

BP: I have my job at the Loft as full-time program director. I also do speaking engagements. Everything from going to a grade school to read picture books to little kids, to reading poetry and giving a workshop at a university or in another state. It’s the gig economy, basically. As a single parent, it’s what I have to do.

For some reason, before COVID hit, most of my bread-and-butter gigging happened from January through early March. I was actually grumpy about it, because every other week I was in my car or going to the airport. But I got very lucky this year.

BP: When my daughter is with me, my life is very much a routine of three meals a day and making sure she’s up on her offsite learning. 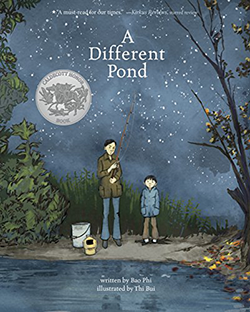 I log into work. I try to get us outside once a day. We live by Powderhorn Park and do socially distanced free time until right before bed, when we watch one episode of “Adventure Time” together. Then we brush up and watch a funny short YouTube video, and then I get her to bed.

Once she falls asleep, if I’m not too tired, I’ll either do some chores or watch TV or read something before I go to bed.

Work has been very busy. As you saw, the Loft’s Wordplay festival had to pivot online. Wordplay is not my primary responsibility, but it’s all hands on deck. My life at the Loft has been helping out where I can and trying to learn very quickly this online stuff that all of us will probably have increasing responsibility for over the next year or so.

I’ve been doing live events for 20 years and can do that with one hand tied behind my back. But setting up and broadcasting a literary reading in a way that looks professional and is consistent with the values and branding of the organization is new territory for all of us.

MP: You once said you wrote a poem a day. Do you still do that?

BP: No, but I actually maintained that for a surprisingly long time. The caveat being that doesn’t mean it was a good poem.

I’ve been working on a novel off and on for the last 10 years. It’s basically an alternate history of the United States, where in the late ’90s there’s a virus that happens that turns people into zombies and southeast Asians get blamed for it. I finally finished it a few months ago. I don’t know if it’s timely now or too soon. This is my first long-form anything. It could be terrible, but at least it’s done.

MP: It seems that poets can respond immediately to anything. Is the pandemic making its way into your work?

BP: That’s why I was drawn to poetry as a teenager. It’s why I became a poet. All of these things were happening – the first Persian Gulf War, police brutality – that required an immediate response. I felt compelled to comment and make sense of things through art. I couldn’t sing, I couldn’t rap, I couldn’t play any instruments. I tried theater – that’s a whole other thing! – but poetry was immediate. You could go to a rally, a coffee shop, or a meeting of friends in a basement with a poem, and no one could stop you.

The shelter-in-place has been very up and down for me. [At first] it was very difficult to write anything because I was so full of anxiety and anger. I don’t have to reiterate the huge number [of acts] of anti-Asian violence.

I want to be very clear here: Anti-Asian violence and discrimination are nothing new. Ever since I had consciousness, I have known that my race has made me an enemy. This is not new to me at all. But the whole heightenedness of it – the fact that it was almost justified at all levels of our civic life, not only super-blatant but also seemingly signed off on as being OK – was really damaging to me. It felt like the hate was cranked up to 11.

This was on top of the stress of working from home, being responsible for my daughter, not knowing if I’m going to have a job, and trying to help my elderly refugee parents, who are poor, negotiate all of this. It’s on top of what everyone else is also worried about. This anvil of anti-Asian racism.

It was just too much. So I didn’t write about it for a long time. Now I’ve written a little, but the writing is relatively new because the feelings are still very raw.

MP: You’re also working on your third children’s book. You’ve said it’s about a duck, but it’s really about deportation?

BP: I knew that if I had an opportunity to write a third children’s book, I would want it to address deportation. The challenge is, how do you tackle a very complicated adult issue in a way small children can absorb? It doesn’t need to be complete. It just needs to get them interested enough to ask questions.

I remembered a duck I saw many years ago in Powderhorn Park, hanging out in a tiny puddle. I thought – what if I write about a duck that comes to Powderhorn and is clearly not from Powderhorn, and all these kids from different races and ethnicities welcome it to the neighborhood in all of these different languages?

I often go to schools where the majority of kids come from ESL families. When I told them the idea, they would get so excited about it. “Oh, maybe there’s going to be a book in English but my language is also represented!” I talked about it, and now I have to do it. Hopefully it’ll be out next spring.

Deportation affects so many communities. There’s a duck, but the people standing up for it are Cambodian, they’re Mexican, they’re Vietnamese, they’re Somali, they’re Arab.

MP: What keeps you up at night?

MP: Is there a silver lining?

BP: I love spending time with my daughter. Working from home, generally speaking, isn’t so bad.

MP: What’s the first thing you’ll do when you can do whatever you want?

BP: Most likely, I’ll take a very short trip with my daughter. Some type of little fun vacation. Probably up north somewhere, to Duluth or the Grand Marais area.

Or I might just take her to Norske Nook. It’s a Wisconsin-based Scandinavian restaurant [chain]. You go there for the pie. They have all these pies, very much like Lutheran church pies. Cool Whip pies. But they’re spectacular.

MP: Is there anything you would like to add?

Bao Phi has written at least one new poem in response to the pandemic, “Alternate Reality, or, A Narrow Opening.” You can read it at Unmargin, a collective website for Asian-Americans and their voices.

On Friday, May 22, Phi will take part in “A Mu Variety Show,” Theater Mu’s first performance since its production of “Peerless” in February. Co-hosted by Mu Artistic Director Lily Tung Crystal and playwright-in-residence Saymoukda Duangphouxay Vongsay, it will be a night of music, poetry, comedy and dance. 7 p.m. on Theater Mu’s Facebook page. FMI and RSVP.

Upcoming (virtual) events at the Loft include two Mentor Series readings on May 29 and June 5. FMI. Two more events not yet on the Loft’s website but worth noting for the future:

On June 4 at 7 p.m.: Salmon Rushdie: “Quichotte.” The Loft’s Wordplay will join with other book festivals to present the internationally famous author as he talks about his latest, an epic Don Quixote for the modern age. This will be a CrowdCast event. FMI. Visit the Loft’s website in a week or two.

On June 25 at 2 p.m., Kao Kalia Yang, author of “The Shared Room,” will join John Coy, author of “If We Were Gone,” for a conversation about heartache and big questions. In “The Shared Room,” a family gradually moves forward after the loss of a child. “If We Were Gone” imagines the world without people. FMI. Check back for Zoom meeting information or visit the Loft’s website in a week or two.

Poet and author Bao Phi: ‘It felt like the hate was cranked up to 11’