It’s almost as if the Minnesota State Fair is actually happening. On Thursday, the Fine Arts Exhibition will open in its usual place on the fairgrounds – with limited capacity (of audience, not art), but still. You’ll have to reserve a time slot and buy a ticket ($10). The first five nights (Thursday, Aug. 27-Monday, Aug. 31) are sold out, but plenty of tickets remain starting Tuesday, Sept. 1. Masks are required. FMI. Check the fair’s website for other events and opportunities to get in the mood, like a list of State Fair brews and beverages and where to find them. Plus the Star Tribune is hosting its own online version of the fair, including a series of newly filmed mini-Grandstand concerts by Lucinda Williams, Lyle Lovett, the Jayhawks and more. You’ll need a subscription to check out the concerts and other features listed on the Stay-at-home State Fair calendar.

The Minnesota Renaissance Festival has been canceled. From the Facebook page: “Although we disagree with the current State directives that prevent a spacious outdoor venue from opening, we recognize the difficulty of the State government’s task. We share their goal of keeping Minnesotans safe and healthy.” The 50th anniversary festival is scheduled for Aug. 21-Oct. 3, 2021.

20% Theatre Company will close permanently in late 2021. An already lean organization with a small staff, it’s not in trouble but lacks the resources to continue beyond its 2020-21 season. So it’s choosing to sunset planfully and with dignity. The final season will include three programs. Fall 2020: “The Naked I: Performances on Film: Transgender Stories Spanning Nearly 2 Decades.” Winter 2021: “Q-Stage: New Works Series,” curated by Artistic Director Marcela Michelle. Spring 2021: “Brujeria for Beginners,” expanded from the one-act play featured in the 2019 Q-Stage Series. The board and staff will continue to support local queer arts organizations. Q-Stage will live on at Lightning Rod. Past “NAKED I” production scripts will remain available for purchase. And the theater’s archives will eventually be donated to the U of M’s Tretter Collection, the largest LGBTQ-specific archive in the upper Midwest.

Yellow Tree Theatre is making leadership changes. Founding Artistic Director Jason Peterson has accepted a new position in Duluth. Co-founder Jessica Lind Peterson will step in as interim artistic director, and Managing Director Peter Carlson will become executive director. The 12-year-old theater in an Osseo strip mall – a perfectly fine place for a theater, btw – will announce a 2020-21 season as the staff and board begin the search for a new producing artistic director. And now is when we say we wish we’d gone there more often, that Osseo isn’t that far away from the cities after all, and Yellow Tree’s production of Dominique Morisseau’s “Skeleton Crew” in February was really good. The Petersons have created a tearjerker of a farewell video, if you dare.

Led by founding Artistic Director Tyler Michaels King, Trademark Theater has been worth watching from the start. On Monday it announced its fourth season, one that reflects the realities of a pandemic and commits to keeping theater alive by commissioning new work. The 2020-21 season will include an audio play version of “Understood,” written by Tyler Mills, updated by the playwright and starring original cast members Sasha Andreev and Adelin Phelps. The play is about people divided, figuring out how to talk with each other despite enormous differences. Its debut was timed for the November 2018 midterms; its return will run Oct. 1 through election day, Nov. 3. The rest of the season will include workshops of two new commissions announced previously, a musical by Kira Obolensky and David Darrow and a play by Harrison David Rivers, both presented digitally. Trademark will also commission three new projects to be workshopped in future seasons: one by JuCoby Johnson, one by Keith Hovis (Park Square’s “Jefferson Township Sparkling Junior Talent Pageant”) and one from local rock band Kiss the Tiger (Meghan Kriedler and Michael Anderson).

The Minnesota African American Heritage Museum and Gallery (MAAHMG) has reopened, with the new normal procedures in place: limited capacity, masks required, free admission with reserved tickets. New work is on display: “Gather in His Name: From Protests to Healing for George Floyd,” a portrait photography exhibition by John Steitz; “Un-Heard,” a video compilation of performing artists expressing the emotions of the movement in improv monologue, dance, spoken word, and sound; a documentary of the first day of the protest in Minneapolis, created by Unicorn Riot. Outdoors on Plymouth Avenue you can see the Black Lives Matter mural organized by the museum and created by 16 artists. Hours are Tuesdays-Fridays, 1-5 p.m.

There won’t be any James Beard Awards in 2020 – or 2021. Instead, a Sept. 25 ceremony, broadcast live from Chicago on Twitter, will celebrate previously announced honorees in categories like America’s Classics and Humanitarian of the Year. It will be a night of storytelling around the challenges the restaurant community faces, and ways to rebuild a stronger, more equitable industry. The James Beard Foundation will also begin a yearlong initiative to audit and overhaul the awards processes “with intent to remove any systemic bias.” The next, more traditional but overhauled awards will take place in 2022. Will there even be a Best Chef: Midwest?

L Now at Mia: “Under the Influence: Early Works by Frank Gaard.” A look back at the early years of the influential Chicago-born, Minneapolis-based painter. Sketchbooks, prints and drawings c. 1964-75, show Gaard absorbing and responding to pop culture, drugs, religion, psychiatry and art history in a process leading up to his large-scale 1975 painting “Untitled (for John and Alice),” part of Mia’s permanent collection and also on display. Thursdays-Sundays, 10 a.m-5 p.m. Free, but timed tickets are required.

V Today (Wednesday, Aug. 26) at 1 p.m.: Virtual book talk with Vikings expert Neil Price. If you saw last year’s “The Vikings Begin” at the American Swedish Institute, you’re at least a bit familiar with Price’s work and his passion for his subject. A professor at Uppsala University in Sweden and one of the world’s leading experts on the subject, he’s written a new book, “A History of the Vikings: Children of Ash and Elm.” He’ll be talking about that and more in his charming British accent. 1 p.m. Register here ($8/5). 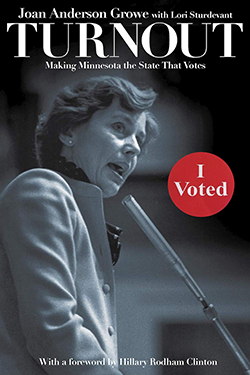 V Today (Wednesday, Aug. 26) at 7 p.m.: Virtual book launch for “Turnout: Making Minnesota the State that Votes” by Joan Anderson Growe with Lori Sturdevant. The turnout for Minnesota’s primary elections was the highest in more than two decades. This is the legacy of Joan Growe, whose new book tells her story and shows how hard work and cooperation made the state a leader in clean, open elections. Hosted by Michelle Witte, executive director of the League of Women Voters of Minnesota, on Facebook Live. Free.

V Tonight (Wednesday Aug. 26): at 7 p.m.: Lunafest. The annual festival of films by and about women, a benefit for the Minnesota Peacebuilding Leadership Institute, will go online this year like everything else. Which makes it easier and convenient for you. A general admission ticket will include a pre-viewing welcome and intro at 7 p.m., followed by a screening. A screening pass ticket gets you a 24-hour pass that starts at 11 a.m. today. Here’s the trailer. Buy tickets here ($25).

V and L Thursday (Aug. 27) at 7 p.m.: Jazz Fest Live presents Robert Robinson. “Minnesota’s Master Male Vocalist,” the great gospel singer will share his light in an evening of hope at Crooners. No matter how you feel going in, you’ll feel better coming out. Sign up here to save your spot for Jazz Fest’s livestream. If you’d rather be there in person, tickets are still available ($35-40). “Doors” at 6 p.m.

V Thursday (Aug. 27) at 8 p.m. on Zoom: Artist Talk: Ralph Lemon in conversation with Philip Bither. A Black dancer, choreographer, writer, and visual artist, Lemon grew up in Minneapolis in the 1960s and ’70s. Starting in 1997, he has had many residencies, commissions, performances, exhibitions and digital art pieces presented by the Walker. He and Bither, the Walker’s senior curator of performing arts, have been in dialogue for 23 years. They’ll likely touch on history, trauma, literature, creative movement, race, memory aging, and radical disruption, as well as the role of the arts and artists in the struggle for racial justice, the pandemic, and what Lemon is contemplating now. 8 p.m. Free. FMI and registration.