The Minnesota Orchestra has announced four more Friday-night concerts to be livestreamed from Orchestra Hall from January through March 2021. All concerts previously scheduled for that time have been canceled or moved into the 2021-22 season. Anything scheduled beyond March 2021 will be addressed in a future announcement.

These numbers include livestreams and on-demand viewings. (All concerts are available on demand for a limited time following the original performance.) They don’t yet include people who watched the TPT MN broadcasts or listened on Classical MPR.

Three of the four new concerts will be led by Osmo Vänskä. One will be led by Slovakian conductor Juraj Valčuha, who last led the orchestra on Nov. 2, 2019 and is considered a leading candidate to succeed Vänskä in 2022. Superstar pianist Jean-Yves Thibaudet, who had been booked to open the orchestra’s 2020-21 season in September, will appear in the final concert.

Each program will feature music by composers of color, a practice the orchestra began last summer, when it gave a series of small-ensemble concerts on Peavey Plaza. Composers will include Chevalier de Saint-Georges, Philip Herbert, Coleridge-Taylor Perkinson and George Walker.

The orchestra has also added a new Young People’s Concert on Feb. 12. A partnership with the Minnesota Zoo, it will be led by Sarah Hicks.

The schedule, in brief (program details are still being finalized):

Jan. 15, 2021: Vänskä will conduct. The orchestra’s principal bassoon, Fei Xie, will give his solo debut.

March 19: Vänskä will conduct, with Thibaudet as featured guest.

Between now and the New Year, the orchestra will observe the holidays with two special livestreamed concerts.

This Friday, Dec. 18, Hicks will lead “A Midwinter Gathering with Kevin Kling.” Conceived and directed by Theater Latté Da’s Peter Rothstein, it will include holiday music from the orchestra, stories by Kling, and performances by JuCoby Johnson, Isabella Star LeBlanc, Ifrah Mansour and Kao Kalia Yang. Ahmed Anzaldúa will conduct his Border CrosSing Chorus. FMI.

On New Year’s Eve, Vänskä will conduct a joyful evening of selections by Strauss, Morricone, Beethoven, Dvorák and other composers. FMI.

V Available now: National Theatre at Home streaming service. The National Theatre in London has livestreaming down to an art and a science. Through its National Theatre Live program, it has been streaming British theater to movie screens across the UK and around the world since 2009, using state-of-the-art filming techniques tailored to each play. Soon after COVID hit, NTL opened its vast archives and released a different play each week from April through July, free to watch on YouTube. Now it’s back as a streaming service, not free but still a bargain if theater is your thing. For $12.99/month, you can watch as many plays as you want, with more being added all the time. (Plus the website offers many extras for each.) You can also rent individual films for three days for $9.99. If you attended NTL screenings at the St. Anthony Main or the Edina Theater back when movie houses were still open, you may recall tickets costing up to $20. FMI.

V Available now: Commonweal Theatre Company: “A Driftless Christmas.” Like every other theater in Minnesota, the Commonweal in historic Lanesboro closed its doors in March and turned to virtual programming. Presented in the style of a radio play, its holiday show is a collection of personal stories, short skits, original music, memories and reflections on the season and the year as a whole, created by nine of its resident ensemble members. Listen here, on YouTube or as a podcast. No reservations required. Free-will donation encouraged, $10 suggested. Through Jan. 4. The Commonweal recently announced its 2021 season – its 33rd.

V Starts today (Tuesday, Dec. 15): Theatre Latté Da: “All Is Calm.” Broadcast nationally on PBS in November, Latté Da’s award-winning original production is now available to stream at pbs.org, on the PBS Video app, and on the BroadwayHD streaming service.

V Wednesday, Dec. 16, 9 a.m. C.S.T.: Chamber Music Society of Lincoln Center: CMS Celebrates Beethoven’s 250th Birthday. We don’t know exactly when baby Ludwig was born, but we do know when he was baptized: Dec. 17, 1770. So Dec. 16 was likely his birth date, and that’s when we celebrate. CMS will present a 12-hour concert of 16 major works punctuated by introductions to his three signature periods, lectures, and a “Meet the Music!” concert for families. Performers include Jeremy Denk, Alisa Weilerstein, Jerusalem Quartet, Miró Quartet and the Danish String Quartet. David Finckel and Wu Han – our own Schubert Club’s featured artists, interrupted, for 2020-21 – will give the welcome. FMI and links. Resources here. All free. The videos will be available on demand for one week. If you have the time, this could be your week-long Beethoven education. V Wednesday, Dec. 16, 7 p.m.: Dakota: Nachito Herrera’s “Cuban Holiday.” What a year Herrera has had. After barely surviving a brutal bout with COVID in April, he was recently named a Steinway artist, a prestigious honor for the Cuban immigrant who calls the Dakota “my musical house.” One of the world’s greatest Cuban pianists, Herrera will play a concert recorded earlier at his home. FMI and tickets ($15). 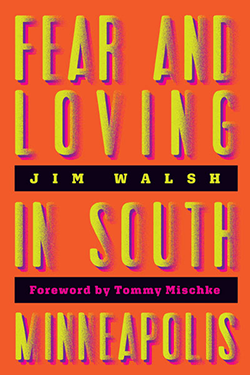 V Wednesday, Dec. 16, 7 p.m.: Magers & Quinn Booksellers: Virtual book launch for Jim Walsh’s new book, “Fear and Loving in South Minneapolis.” In conversation with comic (and South Minneapolis native) Lizz Winstead, Walsh, a contributing writer for MinnPost and former City Pages music editor, Pioneer Press columnist and Southwest Journal columnist, will present his latest, a collection of stories drawn from 30 years of reporting on the life of the city. $5 gets you access to the event and a $5 virtual gift card to spend in the store. FMI and tickets/registration.