Is the Walker prescient? It seemed so in 2020, when South Korean filmmaker Bong Joon Ho joined Scott Foundas for his Walker Dialogue on Feb. 12. That was a few days after Bong’s film “Parasite” won three Academy Awards, the first time a South Korean film had nabbed an Oscar in any category.

Born in Beijing, based in the U.S., Zhao will talk with Mousley about her career, inspirations and influences. Her previous films include “The Rider” and “Songs My Brother Taught Me.” Her next film, “Eternals,” part of the Marvel Universe, is due out in November.

Several Walker Dialogues from the past 30 years are archived and available on the Walker’s website, along with transcripts, film clips, programs, essays, photographs and ephemera.

When it comes to poets laureate, Minnesota has a spotty record. This is not about the laureates themselves, but our state’s lackadaisical, sometimes oppositional efforts to fill the position.

Our first unofficial poet laureate, Margaret Ball Dickson, was named by the Poet Laureate League of Washington, D.C,. in 1934 and subsequently recognized in a letter to Mrs. Dickson from then-Gov. Floyd B. Olson, who was probably just relieved he didn’t have to pick a poet himself. Dickson served until July 21, 1963.

Dickson was followed in 1974 (note the gap) by Laurene Tibbetts-Larson, who also came in through the back door. She was appointed by Abe Altrowitz, a columnist for the Minneapolis Star, and designated “Minnesota commissioner of poetry” by then-Gov. Wendell Anderson the year after he made the cover of TIME Magazine. Tibbetts-Larson held the position until Dec. 6, 1999.

Meanwhile, attempts were made to make Minnesota’s poet laureate official. Legislation was introduced in 1974 and again in 2004 but did not pass. In 2005, a third bill reached then-Gov. Tim Pawlenty, known more for cutting arts funding than supporting the arts. In a letter accompanying his veto, he wrote: “Even though we have a state ‘folklorist,’ I also have concern this will lead to calls for other similar positions. We could also see requests for a state mime, interpretive dancer or potter.” By then, more than half the states had a poet laureate.

Lawmakers tried again in 2007. According to the Minnesota Daily, “Pawlenty only approved the position when state legislators slipped the provision into a broader bill … making it difficult for the governor to veto it again.” The position was established, and the Minnesota Humanities Commission [later the Minnesota Humanities Center] was named in state statute as the responsible organization to solicit nominations for the appointment and make recommendations to the governor.

On March 4, 2008, Robert Bly was named Minnesota’s first poet laureate. He was 81 at the time. He had written more than 30 books of poetry and was internationally known. If you don’t count Bob Dylan, Bly is still Minnesota’s most famous poet. But he was poet laureate mostly in name. When Carol Connolly, who was then St. Paul’s poet laureate, walked over to him at an event and offered her congratulations, Bly replied, “It seems like a lot of work. I don’t plan to do a damn thing!”

Our second poet laureate, Joyce Sutphen, has served admirably in that position since Aug. 22, 2011. She was offered the post by then-Gov. Mark Dayton. A professor of literature at Gustavus Adolphus College who had already published several books of poems, Sutphen took very seriously a job with no job description. She made it a real thing. She was admired and respected by other poets, one of whom, her friend Connie Wanek, wrote this introduction for mnartists.org.

In November 2020, when the New York Times asked poets laureate from across the U.S. what the people in their states had to be thankful for, Sutphen responded with a poem titled “Thanks, With Northern Lights.”

And now it’s Gov. Tim Walz’s turn. After 10 years of service, Sutphen has resigned as Minnesota’s Poet Laureate, and the Minnesota Humanities Center (MHC) has teamed up with Minnesota’s Center for the Book (the Friends of the Saint Paul Public Library) to begin the process of naming our next one. The position carries a $3,500 annual stipend from MHC, plus reimbursement for reasonable travel expenses incurred for laureate-related activities.

Nominations and applications are due by 11:59 p.m. Wednesday, March 17. These will be reviewed in March and April by an independent review panel. A short list of finalists will be sent to Walz’s office no later than April 13.

Do you know someone who’s worthy?

V Streaming on demand: New Conservatory Theatre Center: Harrison David Rivers’ “Interlude” with H. Adam Harris. NCTC is in San Francisco, but so what? Thanks to the internet and the pandemic, Minnesota fans of Rivers’ plays and Harris’ acting can stream this world premiere. Commissioned by NCTC, “Interlude” is a personal reflection of a gay Black man’s experience during the events of 2020. Presented as an audio drama that blends with a visual storyscape, it follows Jesse Howard as he returns to his childhood home and conservative parents in Kansas. The character of Jesse Howard appears in another Rivers play, “This Bitter Earth,” which was produced by Penumbra in 2018 – and premiered at NCTC in 2017, with Harris in the role. Available through March 24. FMI and tickets ($0-40, pay-what-you-wish). Be sure to watch the preview.

V Livestreaming Friday, March 5, 5 p.m.: University of Minnesota: Poet Nikky Finney in conversation with U of M poet and professor Douglas Kearney. In a talk titled “The Insurgent Sensualist: Truth and Beauty in Social Change,” two poets consider the beautiful truths in art that faces everyday brutality and seeks to change social realities through activism, on and off the page. Finney’s latest book is “Love Child’s Hotbed of Occasional Poetry.” Free, with registration required.

V Livestreaming Friday through Sunday, March 5-7: Pillsbury House Theatre: Breaking Ice. For 20 years, Pillsbury House’s award-winning Breaking Ice program has been helping organizations become more diverse, equitable and inclusive. It “breaks the ice” for courageous and productive dialogue. This is the first time the program is being made available to the public. A diverse group of professional actors will present a series of real-life scenes showing how commonplace, unintentional language and behaviors may be misunderstood or hurtful to others. The performance will be followed by a discussion led by trained facilitators. Performances are Friday and Saturday at 7 p.m., Sunday at 6. FMI and tickets (pick-your price; $15 suggested).

V Streaming Friday through Sunday, March 5-7, at 7:30 p.m.: Cedar Cultural Center: Cedar Commissions. Formerly the 416 Commissions (for the Cedar’s street address), the annual Cedar Commissions, funded by the Jerome Foundation, are a big deal. Six early career/emerging Minnesota composers and musicians are each given $3,500 to create 30+ minutes of new music, plus the chance to perform it on the Cedar’s storied stage before a live audience. Because COVID, this year’s performances have been filmed. FMI and tickets (pay-what-you-can starting at $5 each night, or $30 for all three nights). 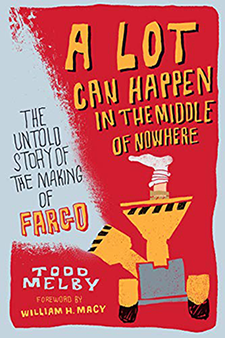 V Livestreaming Monday, March 8, 7 p.m.: Minnesota Historical Society Press and Trylon Cinema: “A Lot Can Happen in the Middle of Nowhere: The Untold Story of the Making of Fargo” book launch. Author (and Trylon volunteer) Todd Melby explores the behind-the-scenes creative moments that made the Coen Bros.’ movie such a hit and examines how much the story was inspired by true events, as the film claims. With special guests actors Stephen Park (Mike Yanagita), Larissa Kokernot (Hooker #1) and Melissa Peterman (Hooker #2). Free to watch on Facebook or YouTube. On Wednesday, March 10, the Trylon will host a screening of “Fargo,” with Melby in attendance and books available to purchase. FMI and tickets ($8). Limited seating.