From July through December 2020, five sketchbooks traveled around the Twin Cities. Whenever one moved on, it carried with it something new: a sketch or two by an artist, who would deliver it to the next artist, and so on. Eventually, the sketchbooks contained 120 original works by 68 Twin Cities artists.

Starting today, you can order a limited edition book, based on the sketchbooks, with work by all 68 artists. Some are names you’ll recognize: Jim Denomie, Hend al-Mansour, Christopher Harrison, Dyani White Hawk, Leslie Barlow, Gordon Coons, Reggie LeFlore, Russ White. Others are emerging artists. Some work in studios, some in the streets. Several are McKnight or Jerome fellows.

All net proceeds will be directly distributed to participating artists, for whom COVID-19 has posed what has been called an existential threat.

The book is “MPLSART Sketchbook Project 2020.” The publisher, MPLSART.COM, is a visual arts events calendar and weekly newsletter covering Twin Cities artists and galleries. Founded in 2005 by designer and curator Emma Berg, it has been owned and operated since 2015 by Blaine Garrett and Katie Garrett, both visual artists. Blaine is also a software engineer and Katie works in marketing.

This year or next, 10 years from now or 20, you can open the Sketchbook Project and see what artists were making in 2020, the year of the coronavirus and the killing of George Floyd by Minneapolis police. The year of masks and distancing, isolation, social unrest and racial reckoning. The year when it became even more challenging to be an artist, and more necessary. 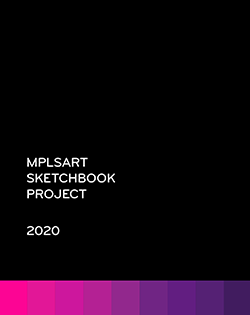 A survey of our visual arts community in a historic moment, and a capture-the-Zeitgeist project, the book began in the Garretts’ backyard as a way for artist friends to stay connected.

“We live in the Seward neighborhood,” Blaine said by phone last week. “We were very close to the protests and everything after the George Floyd murder. We shut down MPLSART.COM for a couple of weeks. July was the first time, personally and as an artist, after we’d been out volunteering and with everything else going on, that I had a chance to take a breath. A lot of artists I talked to were in the same boat. Like, ‘Okay, now what? What can I possibly say with my work?’

“We quickly realized how important it was to the artists themselves. A lot of artists tried some things they had never tried before, due to the format or due to what they were personally going through.

“Once the project escalated, there were a lot of logistics. We were doing the scheduling [so the sketchbooks would be finished by the end of the year], making it geography-based [so artists wouldn’t have to travel too far to make deliveries], and taking precautions for the pandemic to minimize contact. One artist would drop a sketchbook off at the next artist, which both artists appreciated. Especially as summer was winding down, a lot of them wanted to get out of the house and see other people. It was nice to be able to stand for a few minutes and have a conversation about the project, then part ways. We took a lot of care and a lot of precautions because of the pandemic.

“Come the fall, we realized this was potentially kind of a big deal, and we should be reaching out to more artists. We reached out to All My Relations Gallery, and they helped us coordinate quite a few artists, most of which ended up in the book. Dyani White Hawk and Jim Denomie reached out to us to be in the project. I definitely had a moment of elation about that. All My Relations also served as a pickup and drop-off spot for the book, which we really appreciated.

“I think of the Twin Cities arts community as having a lot of circles that don’t necessarily overlap. In our calendar [at MPLSART.COM], we include things from all over. That became one aspect of the book. We obviously have lots of prominent local visual artists. But we also reached out to the Twin Cities Collage Collective and the local chapter of Urban Sketchers. That sort of thing. In the spirit of this year, the book has a wide variety of artists representative of the Twin Cities arts community, not just the ones that show in galleries.”

Meanwhile, MPLSART.COM has been publishing interviews with artists involved in the Sketchbook Project.

A Kickstarter presale for the 88-page hardcover book launches today (Tuesday, March 2). From now through March 8, the cost is $55; starting March 9, $65. The Kickstarter runs through April 9. The number of books preordered by the time it ends will determine the size of the edition. The book will be sold only through Kickstarter.

On April 10, Gamut Gallery will open the MPLSART Sketchbook Project Exhibition, a show of new original works by 35 of the artists included in the book. All will be priced under $500. Several of the artists have shown at Gamut in the past; for 13 artists, this will be their first time. MPLSART.COM will also publish a series of limited edition prints to be available for sale at Gamut. More help for the artists.

The five original sketchbooks will be on display at Gamut Gallery. In late May, they will be sold at auction by Revere Auctions in St. Paul. Proceeds from the sale will be distributed among the contributing artists.

Blaine Garrett is considering a 2021 Sketchbook Project. “A lot of artists have reached out about wanting to participate,” he said. “Part of me thinks the project has a very specific time and place: 2020. However, the need for the project likely will continue to exist well into 2021.

“I read another article the other day with anecdotes about how galleries and artists are doing great this year because people are home more and need nice artwork to hang behind them for Zoom calls. Along with news of record-breaking sales at the big New York auction houses, I think most people get the impression artists are doing well this year. This just isn’t the case for the vast majority of artists, especially those who supplement their practice with a second job – many of which are in the service industry.”