Arts & Culture
Artscape
March 4, 2021
Shortly before 7:30 on Tuesday night, we dialed a number, punched in a code, and waited, briefly, for a stranger to do the same. For an hour, the two of us spoke and sometimes acted in response to prompts and questions from an automated voice. We never learned each other’s names, locations, livelihoods, race, pronouns or relationship status. We were simply Person A and Person B.

At the start, we were told This is not a conversation. More than once, as time passed, we were told Someday this will be something we will talk about or laugh about or never forget. That These are only fragments, but this is all we have. We were asked to touch our cheek, take our pulse, sit in darkness. To picture a situation we found ourselves in together. To reveal details about our lives, some banal and some personal.

We spoke directly to each other only when instructed. Say hello. Say goodbye. Repeat what Person A just said. Ask each other, Are you holding on?

The two of us were taking part in a radical, immediate and intimate work of theater, presented here by the Walker. Created by the New York-based duo Abigail Browde and Michael Silverstone, aka 600 Highwaymen, “A Thousand Ways (Part One): A Phone Call” is an extraordinary experience. In a time when we can’t go to live theater, it brings live theater to us, not on a screen but into our heads – even our hearts – in real time.

It’s far more powerful than we imagined or expected. Not because anything in particular happened or was said, but because after more than a year of staying safe, staying home and avoiding people, we were connecting, however strangely, with another human being. We could hear the emotion in her voice. That probably went both ways.

What do we want from theater? To be entertained, provoked, enlightened, shocked, amused, diverted, transformed. To feel. But mostly to connect. “A Thousand Ways (Part One)” isn’t a conversation, but it is an encounter and an exchange after months of nothing. We’re asked to be there, and we show up, and we stay. Think of it as practice for when we return to the world, shaggy and blinking.

Fingers crossed, “A Thousand Ways (Part One)” will be followed by parts two and three. In “(Part Two): An Encounter,” scheduled for April 20-May 2 at the Walker, two strangers will meet on opposite ends of a table. “(Part Three): An Assembly,” dates TBD, will be a public convening. You don’t have to attend one to attend any other.

We awoke on Wednesday thinking about our phone call, and the person we’ll never meet or speak with again. We learned that when COVID is over, she wants to take a trip with her mom, somewhere without light pollution, to see the stars. That in her confirmation photograph, her father rested his hand on her shoulder. That she has a cat and can build a fire but can’t drive a manual transmission. That she has memorized Frank Herbert’s “Fear is the mind-killer.”

She learned some things about us, too.

“A Thousand Ways (Part One)” is 600 Highwaymen’s return to the Walker. Their work “The Fever” was part of Out There 2018. Part One has been selling out across the country. FMI and tickets ($25). A post-experience Q&A with the artists will be offered via Zoom on Wednesday, March 17, at 7 p.m.

Minnesota musicians, how would you like to hang out at the library with Pert Near Sandstone, Pavel Jany, Erik Koskinen, Chris Koza, Joyann Parker, Michael Monroe, Atlantis Quartet, deM atlaS, Maurice Jacox, Nur-D, Dan Israel, the Okee Dokee Brothers, the Metropolitan Symphony Orchestra, the Illicit Sextet, Siama Matuzungidi, Mayda, Atmosphere, PaviElle, Annie and the Bang Bang, the Belfast Cowboys, Tina and the B-Sides and Kiss the Tiger? To name a few. 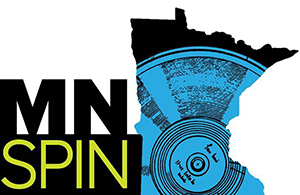 MNspin, Hennepin County Library’s online showcase of Minnesota music, has opened submissions for 2021. Launched in 2017, MNspin is like a growing, Minnesota-centric Spotify list, except anyone can listen and anyone with a library card can download songs for free.

Musicians and bands of all genres may submit one track or song from an album or EP produced in the last five years. A panel of local music experts and library staff will review all submissions. Selected artists will be invited to upload the rest of their albums or EPs, sign a two-year license agreement and receive $200.

If you’re already a MNspin artist, you may submit new material. If you’ve submitted before and weren’t accepted, you may submit again. The reviewers change from year to year, so the music is curated from fresh perspectives.

MNspin currently has more than 320 albums available in 17 genres. Funding is available to add up to 100 new artists this year.

V Streaming now: Schubert Club: Courtroom Concert: deVon Russell Gray. The Schubert Club’s composer-in-residence for 2019-21, multi-instrumentalist and new-music performer Gray, aka dVRG, recorded a Courtroom Concert that premiered on Feb. 12. All Schubert Club concerts in February-May 2021 are being presented as free virtual events, available to watch for 30 days following the premiere, which is incredibly generous. Gray invited Kip Jones, a violinist in the New York City-based string quartet ETHEL, to join him in a series of improvisations, interspersed with conversations between Gray and composer Abbie Betinis, host of the Courtroom Concert series. Gray plays both piano and bassoon. This is a beautiful concert in every way. See it if you can. V Friday through Sunday, March 5-7: Cowles Center: MERGE: Hatch Dance and STRONGmovement. The Cowles Center kicks off its “Merges in March” series, originally scheduled for March 2020, with Helen Hatch, Darrius Strong and their companies. Hatch Dance is a technically articulate modern dance company; STRONGmovement blends styles including Hip Hop, ballet and West African dance in its own contemporary statement. Each company will perform separately, then come together for the world premiere of a new ensemble work, “HYBRID.” Here’s a preview with Hatch and Strong. 7:30 p.m. on Friday, on demand Saturday and Sunday. Friday’s performance will be followed by a live Q&A with the artists. FMI and tickets ($25). V Saturday, March 6, 7 p.m.: Dakota: Livestream: The New Standards. Following up on their Preener’s Eve (Pre-New Year’s Eve) show at the Dakota, Chan Poling, John Munson and Steve Roehm return for an evening of banter and their own jazzy takes on songs they love. They’re such pros, and so much fun. FMI and tickets ($15).

L Opens Saturday, March 6 at the Minnesota History Center: “Extraordinary Women.” The History Center has reopened for visitors, and its new exhibition is timed for Women’s History Month. Explore the inspiring stories of Nellie Francis, a St. Paul activist who worked for Black rights and women’s suffrage; Ruth Tanbara and her family, who were given permission during World War II to relocate from San Francisco to St. Paul instead of being sent to a U.S. incarceration camp; Claire O’Connor, who joined Minnesota’s Freedom Riders in Mississippi in 1961; and Pat Bellanger, White Earth Ojibwe, who helped found the American Indian Movement (AIM). While the online ticketing system is being upgraded, call the box office to purchase tickets: 651-259-3015.

Powerful theater for two, by phone; MNspin is open for submissions