What do you eat when you’re traveling 3,700 miles across the icepack of Antarctica, when there’s no game to be caught and no food to forage? You bring the supplies yourself. If you run out, and you can’t get a plane to save you, you will simply perish.

Explorer and environmentalist Will Steger knows this fact well. He led the first dogsled expedition across Antarctica in 1989 and 1990, and the first confirmed dogsled journey without re-supply to the North Pole in 1986, as well as the longest at the time dogsled traverse of Greenland in 1988. Planning meals for those trips is a balancing act of weight, calories and nutrition, he says, where you have to precisely calculate strict rations of 1 kilo of food a day, adding up to 6,000 calories to keep the body warmth up. Most of the diet is a lot of butter, cheese, and grains like pasta, rice and oatmeal. “The oatmeal is the best oatmeal in your life, every morning,” Steger tells me in a Zoom interview, when I reached him at his houseboat in the Twin Cities.

Traveling in the Arctic is a different story. “When I’m in the Arctic regions if I can attain it, I eat pretty much what the Native people do,” he says. One of his favorite foods is almost raw meat, cooked very lightly. When he’s traveling on the Native areas on the sea ice, he eats seal meat, cut in chunks and boiled just enough so it’s done on the outside, and then he drinks the oily water that had been used to boil it. “I don’t normally dream about food, but around three in the afternoon, when you’re really hungry, your mind changes so I sort of think about seal meat.” 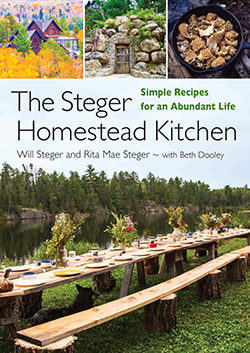 You won’t find seal meat or Steger’s oatmeal recipe (with Chia seeds) in his new cookbook, written with his niece, Rita Mae Steger, and James Beard Award-winning food writer Beth Dooley. What you will find is a book that addresses climate change and environmental problems by offering good food using local, organic ingredients that don’t create a lot of waste. “The Steger Homestead Kitchen: Simple Recipes for an Abundant Life,” features recipes like almond berry griddlecakes, Northwoods mushroom wild rice soup, and spatchcock chicken with blueberry glaze, drawing on the kind of food served at the Steger Wilderness Center, known also as “The Homestead,” located in Ely Minnesota. With leadership programs, wilderness courses, and partnerships with other institutions like Summit Academy, a vocational school in North Minneapolis, the center focuses on building a more sustainable world as it nurtures new leaders and addresses environmental issues.

When he’s not off on expeditions, like an upcoming one to the Northern regions of Canada (he travels solo these days, with just a canoe on runners, because he feels safer without worrying about the safety of other people or dogs), Steger spends the warmer months in Ely, Minnesota. Steger first moved to Ely from the Twin Cities in 1970. There he built a winter school and wilderness program. For about 12 years, there was no electricity, and for 25 years, no road. But he did have a root cellar, and there was a co-op that had been established in town.

“It was an intentional thing to live that simple life but live it organically,” Steger says. He’d buy organic grains in bulk from the co-op, and walk them the three miles down the road. “That was a big deal,” he recalls. “You didn’t have a car, and so you’re intimate with everything that came in, because you haven’t carry it on your back or on a dog sled.” Over 12 years, the school generated less than four cubic yards of garbage.

Now the Steger Center is a lot bigger, and Steger has grown concerned about the generation of micro trash that has come with the influx of more people. “People have these habits they’re not even aware of,” Steger says. “Even environmentalists will come in and we’re picking up their micro trash for about a month later.”

About five years ago, Steger was working with students at Dunwoody on a collaborative design project for the new dining hall at the Steger Center, where he began to ruminate on how to manage the waste stream for the dining hall through the means of a cookbook. “I thought to do it the old way,” he says. “We were aware of what we bought, we bought simple organic foods, and then we raised the rest.”

He brought up the idea with Beth Dooley, an award winning cookbook writer who co-wrote “The Sioux Chef’s Indigenous Kitchen,” with Indigenous chef Sean Sherman. “The cookbook has to do with more local food,” Steger says. “We’re into conveniences at the expense of a lot of other things. But actually the it’s the other way around. You’re living that simple life — it’s a much higher quality life. It’s much better for your body, but it’s better for the environment.”

“Everyone just loves her food,” Steger says. “She cooks for 30-35 people without getting bent out of shape, and she turns out to be the perfect person to build a cookbook around.”

When Rita Mae cooks at the Homestead, she usually makes things up on the fly based on ingredients that are available that day. “I go to town to do some grocery shopping at the local grocery store and at farmer’s market just once a week,” she says. She also sources ingredients from the two gardens at the center, with beets, radishes, rhubarb, and lots of herbs. Some years they have tomatoes at the end of the summer, and there’s a lot of cabbage and kale.  “I’ll start my day just by harvesting whatever vegetables are there,” she says. “I do have staple things that I like to make, but I always it depends on what my mood is.”

Rita Mae grew up cooking when she was about three years old. “My mom’s from Vietnam, and food is a big deal,” she says. As a young person, she’d travel to Vietnam every summer, and at every meal, her family would sit down with each other. “Our table would be like 12 people around table with big spreads of food, little plates of whatever, fish vegetables or soup.”

Rita Mae’s worked in restaurants too, preferring the back of the house to serving work. For the last six years, she’s worked at the Homestead.

For the recipes in the book, she worked with Beth Dooley, whom she showed photos from her camera of her favorite foods. They tested recipes together. “We just met up and cooked for a while,” Rita Mae says. “A lot of what’s in the book are recipes I make all the time. There is a spaghetti squash-like casserole. You just steam the squash hull with the skin still on it, so when you open it up, it’s really easy to scoop out. You take some marinara sauce and some herbs and mix it up in an oven.”

Another recipe features baked cabbage and sausage on top, with some butter, and turkey burgers, with mayonnaise and avocado. “Vegetables are the star of the show,” she says. “I’ll save a lot of the scraps from vegetables, and I try to reuse everything I can. We try not to buy anything in plastic, and we try to make our own almond milk, make our own yogurt, our own kombucha, just try to do as much as we can ourselves.”

Rita Mae brings her cuisine elements from the Vietnamese tradition into her recipes as well. She uses fish sauce, soy sauce, and red pepper flakes. She also sources from Steger family recipes from her grandmother’s old hand-made cookbook, with recipes for meatloaf and other hearty meals.

Woven into the recipes are writings from Steger and Dooley, who Steger says helped bring his and Rita Mae’s voice through the pages.  “She was the glue that kind of held to make the matrix,” Steger says.

The virtual launch of “The Steger Homestead Kitchen: Simple Recipes for an Abundant Life,” takes place 7 p.m. on Feb. 24, as part of the Talk of the Stacks series with the Friends of the Hennepin County Library. More information here.