From the buckthorn-filled woods near Hidden Beach to a confluence of Elvis impersonators two hours north of Toronto, local writer Will McGrath’s new book, “Farewell Transmission: Notes from Hidden Spaces” is part essay collection and part travelogue. Most of all, the book is a guide to the sometimes curious, sometimes tragic, sometimes monstrous, and sometimes epic characters he encounters on his journeys.

Currently teaching at Hamline University in the master of fine arts program, McGrath has worked as a reporter and as a case worker in the human services field. He draws on his experiences working with people who are unhoused, resulting in some of the most poignant essays in the book.

For example, there’s a story about a man named Willy — “beloved by all staffs everywhere” — who lives with addiction, is chronically homeless and is dying of cancer. McGrath’s writing brings Willy’s magnetic personality to life. McGrath puts himself in the story too. You see ways in which the author has advocated on behalf of Willy’s wishes to remain autonomous and out of the hospital, and also the moments for which McGrath feels regret for ways that he might have made different choices regarding Willy. For instance, leaving him in the hospital one night when Willy begged him to help him leave, and finding Willy in restraints the next day.

McGrath says his work with the homeless began right after college, without having any particular background. “My role there was to be as useful to people as I could,” he says. “There was never any thought that I might be trying to tell people a different way to live their lives. It’s just whatever way you can be useful to people.”

McGrath’s writing also draws on his time spent living in faraway places. His wife, Ellen Block, is an associate professor and department chair in the anthropology department at the College of St. Benedict and St. John’s University. Her field work has taken the family to Lesotho, a small kingdom that is surrounded by South Africa.

“I’ve long joked with her that, like any of my good ideas I get, I’ve just stolen from anthropology,” McGrath says. “In a similar way to journalism, (it’s) about paying attention. I feel like the best journalism and the best anthropology comes from people who are engaging sincerely and openly with a community, while also keeping a little bit of reserve, where you’re, you know, trying to be objective.”

You can see that anthropological work in McGrath’s missives from North American subcultures as well, like the independent wrestling scene. McGrath’s writing dives into the history of the entertainment “sport,” with quotes by Roland Barthes and Clifford Geertz, and demonstrates his “field work” through his conversations with fans and wrestlers and his descriptions of the events.

“It’s a little more tongue-in-cheek in that situation,” McGrath admits. Certainly, McGrath’s writing style is more Chuck Klosterman than Margaret Mead, but even when he’s adding a stylistic voice, he remains observant and reflective. “I’m trying to approach that world on its own terms, whether I understand it or not,” he says. “Everyone that I encountered in that indie wrestling world was interesting and thoughtful, and passionate about these projects that they love.”

A number of the chapters in the book come from previously published material. For instance, there’s an almost unbelievable story about the author’s sister-in-law losing her cell phone, and then finding images from Yemen pop up in her iCloud account, and Arabic writing appearing in her notes app. That story was published in the Atlantic, with some slight changes. 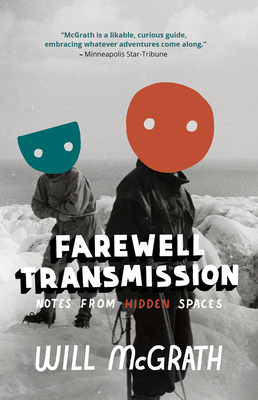 In some cases, McGrath has offered a postscript to the previously published material, with comments about what has happened since. For instance, one shocking piece is called “A Noose in Hentiesbaai.” It’s about a beach in Namibia where a white couple had hung a noose on the beach with a sign reminding visitors to keep the beach clean — in 1978.

McGrath first published the essay in Guernica in 2015, and it had apparently made an impact— making the rounds and seemingly stirring heated discourse about the noose and its place there. In 2020, the noose and the tree were set on fire. Was McGrath’s essay partially the cause? 2020, you may remember, was the year of worldwide racial reckoning following the death of George Floyd. There are likely many factors, but McGrath did receive angry letters from defenders of the noose, who accused him of causing the controversy and enacting “parachute journalism.”

In another story, McGrath draws on a published essay he wrote about a diamond mine in Lesotho, a kingdom surrounded by South Africa. McGrath had gotten close enough to his subjects to offer a pretty unpleasant picture of the racism held by whites in the community, which were reflected in his published journalism. In “Farewell Transmission,” McGrath reflects on the fallout of the essay.

“It’s nice to be able to have that little bit of extra reflection later,” McGrath tells me. “With the Diamond mine piece, I felt simultaneously proud of the article that I did. But also, I felt like I had betrayed the trust of those people that were hosting me, even though I firmly disapproved of their behavior.”

Throughout the book, McGrath takes readers along to the places he travels — setting the scene and offering an inside view into the people he meets. You see the careful observing and listening involved in putting this collection together.