1634  On a ship headed for the Massachusetts Bay Colony, religious renegade Anne Hutchinson organizes a female discussion group to examine sermons given at weekly services. Eventually condemned by the Bay Colony’s general assembly, the gatherings inaugurated a tradition of women’s analytical discussion of serious texts. 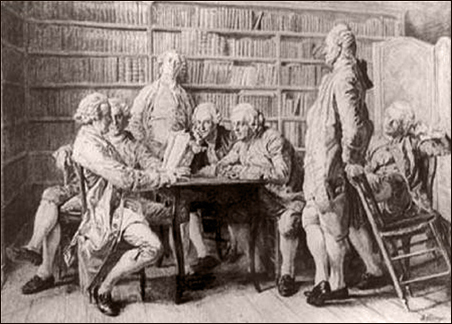 An illustration depicting the Junto, a literary society formed by Benjamin Franklin in 1727.

Late 1760s  Hannah Adams, who went on to become the first American woman to earn a living through writing, joins a reading circle in her village of Medfield, Mass. The circle read and discussed the belles lettres and shared their own poetry and prose writing.

1778  Hannah Mather Crocker organizes a similar female reading society in Boston to study science and read the belles lettres. Crocker took the radical position of asserting that formal study of science and literature was more suitable to women’s dignity than the frivolous activities that society deemed suitable.

1826  The first American lyceum is founded, launching the lyceum movement. Lyceums were voluntary local associations that sponsored lectures and debates on current issues. They attracted such speakers as Ralph Waldo Emerson, Frederick Douglass, Henry David Thoreau, Daniel Webster, Nathaniel Hawthorne and Susan B. Anthony. By 1834 there were roughly 3,000 lyceums in the Midwest and Northeast.

1827  In Lynn, Mass., the Society of Young Ladies is established, initiating the formation of African-American women’s literary societies in cities throughout the Northeast, including Philadelphia, New York, Boston and Providence.

1866  Sarah Atwater Denman starts a women’s study group in Quincy, Ill., that comes to be known as Friends in Council. The group, which met in Denman’s home to read aloud and discuss literature and philosophy, is the oldest continuous literary club in America.

1895  The Cadmus Club, a male reading group, is founded in Galesburg, Ill. The club held regular meetings, hosted lectures and shared knowledge of book-making and book history. Other male book clubs founded at this time included the Grolier Club in New York, the Club of Odd Volumes in Boston and the Rowfant Club in Cleveland.

1900  Around the turn of the century, women’s literary societies are thriving. Progressive Era reading groups arose from women’s reform groups, church groups, the National Council of Jewish Women and the American Association of University Women.

1926  Harry Sherman founds the Book-of-the-Month Club, a mail-order business that offers customers a new book each month. An Editorial Board of Judges was responsible for recommending and promoting only the most noteworthy books in any category.

1984  Helen Hooven Santmyer’s “And Ladies of the Club” becomes a national best-seller after being chosen as a Book-of-the-Month Club selection. Centering on members of a longstanding book club, Santmyer’s novel inspired the formation of book groups across the country.

Late 1990s  Online book clubs emerge as an alternative to traditional face-to-face groups. Members of clubs no longer need to meet regularly at an appointed place and time.

Today  It’s estimated that there are more than 5 million book club members in the United States. Most clubs have 10 or more members. 70 to 80 percent of clubs are all-female.

The evolution of American book clubs: A timeline