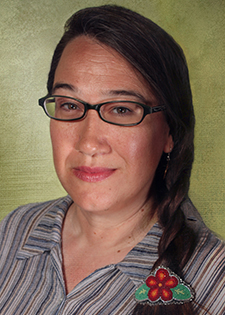 Photo by B FRESH Photography and MediaHeid Erdrich

Confession: I was skeptical when I saw that Heid Erdrich had written a cookbook. After all, she’s a poet! Was this an escape-route career, an alternative to the starvation diet of poetry book sales?

Then again, not many people get rich writing cookbooks either, and Erdrich doesn’t even have a chatty food blog or a hot restaurant to drive sales. As it turns out, Erdrich remains very emphatically a poet, and became a cookbook author only by default; Minnesota Historical Society press was considering putting a book out to highlight the region’s indigenous food heritage, asked Erdrich for advice, and suddenly, she says, it was a “tag — you’re it situation,” and she was talking with elders, pondering food origins, and in the kitchen testing recipes.

But her treatment of these ingredients is expansive, as she reaches beyond Minnesota to include Native harvests from across North America, and incorporates the Native traditions of recent immigrants. (She is a member of the Turtle Mountain band of Ojibwe — and half German-American.)

Curries work beautifully with indigenous staples like squash, and Manoomin Porridge with Coconut Milk is a perfect cross-cultural comfort food. She’s less friendly to that prairie-killing import, wheat, however, and discusses the impact climate change is having on the Native diet.

The recipes here are intriguing, accessible and downright delicious, but Erdrich pairs them with fascinating and sometimes amusing little histories, family stories, jokes and insights into the ingredients that shaped Native culture in Minnesota. As it turns out, there’s poetry here after all.

MinnPost: There are other Native cookbooks out there. What does your book do that those others don’t?

Heid Erdrich: Mine tells stories. Mine happens now and tells the stories of our current food situation, along with family stories and cultural stories and the stories of the foods that sustained people in this region for millennia. A recipe is a story, I learned. The ingredients are the cast of characters.

MP: What part of the writing process used your “poet’s brain”?

HE: Each recipe has a little “headnote” at the top, and that was my place to concentrate language, be lyrical and imagistic and evoke emotion. Those are little poems at times. It was my favorite part. But there are about 125 of those notes, plus several essays and longer, more journalistic parts to the book, so it was a cross-genre workout.

MP: You include numerous anecdotes about your sisters [the novelist Louise Erdrich and physician Angela Erdrich] here. Do you cook together often? Did they have opinions on what this book should include?

HE: We eat together more often than we cook together, but over a lifetime we are pretty familiar with each other’s cooking. They did have opinions about the book’s contents, and they all made contributions, but mostly they were supportive and kind while I labored with the project. Cookbooks are really hard work and I had no idea. Cookbook authors, I salute you!

MP: You write about how climate change is affecting the Upper Midwest Native diet. It’s happening very quickly. How are people adapting? 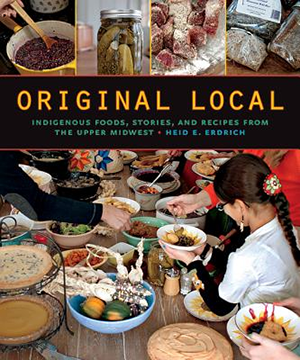 HE: To be clear, the biggest change to the Native diet is colonization. We are struggling now with climate change and threats from mining and genetic modifications to foods. People are fighting very hard to keep from having to adapt — that’s where we are now. Because there’s no adaptation when your food is just decimated by contamination and weather. It is simply another loss looming where we have suffered cultural apocalypse. But the people I profile fight with a good spirit and I am so proud of our food warriors.

This book is my little way of joining that fight. We should all be concerned about these threats to the foods around us — they are our canaries and the region cannot become a coal mine or any other kind of mine for that matter.

MP: Let’s talk about Thanksgiving. Do you “keep” this day? If so, what are you serving? Any specific table rituals you care to share?

HE: My favorite holiday — but I like to refer to it as Indigenous Foods Day, rather than the myth of happy Indian-Pilgrim relations. Really, it is a celebration of harvest and thanksgiving and family. The main foods of the holiday are indigenous to the region: turkey, pumpkin, corn, beans, cranberries and so on. I wish the whole country would agree to recommit the holiday to indigenous food preservation, food justice, and make it a time to learn about food sovereignty and the peoples who developed corn and beans, which now feed the world.

MP: OK, speaking of colonialism, you seem to really wrestle with the frybread issue here. Other non-native, adopted and adapted foods are included, and other recipes include flour, but it sounds like frybread was originally off the table for this book. I wonder, was there a pro-frybread lobby pressuring you to include the bangs recipe [a frybread variation beloved by the Erdrich children], or did nostalgia just win out?

HE: Shhh, the pro-frybread lobby is powerful and I fear retribution!

Frybread is almost stereotypical of Native cooking, and I always resist stereotype, even positive ones. But there are also so many health issues related to diet in Indian Country that I have been really anti-frybread for a long time. But yes, nostalgia won out and I included a new recipe for “Pumpkin Bangs” a kind of frybread that incorporates an indigenous ingredient, pumpkin. My hope is that it makes people think a little about our food traditions.

MP: You make a bit of fun of yourself for being a vegetarian Indian [a joke, from the book: What do you call a vegetarian Indian? A bad hunter], but you also make the case that the indigenous diet is far less meat-centric than people might think. Is this a Native Diet for a Small Planet?

Originally the diet of indigenous people balanced need with want the way “Diet for a Small Planet” suggests. As far as I can learn, most diets were not overly focused on red meat until relatively recently. Certainly there was no domestic production of meat animals.

But I hope my readers understand that our diets were micro-local, meaning that even within a culture, one group might have a lot of deer and another a lot of fish and so on. One of the folks I talked to from Grand Portage reservation said that the main foods up there long ago were turkey and seed grains, even though they were right on Lake Superior. In other places, the main foods were beans, squash and corn, with rabbit or manoomin and fish. These are sustainable foods, even today.

MP: In the end, this feels like a very Minnesota cookbook, with local ingredients but influences from all the cultures that have come here since. Is including things like Southeast Asian-inspired dishes controversial?

HE: I wanted to make a cookbook a lot of folks can use in a lot of places — in the cities and in rural areas, rich and poor and just in a hurry to eat. It may yet be controversial to include any ingredients that are not indigenous — I am sure I will get some criticism, especially from people who just read the recipes and not the essays.

However, not all the recipes are mine alone and I found myself adapting contributor’s recipes to use more indigenous ingredients, so we have a varied way of cooking out there even among the Ojibwe, Dakota and several other tribes I took care to include.

I know from contributors’ recipes that whether we notice it or not, we love the recent immigrant influences in our regional cuisine, as much the same way as we have incorporated German influences from previous generations and French before that and so on. There’s no reason to pretend at some kind of cultural or culinary purity when we have all been friends and family for so long.