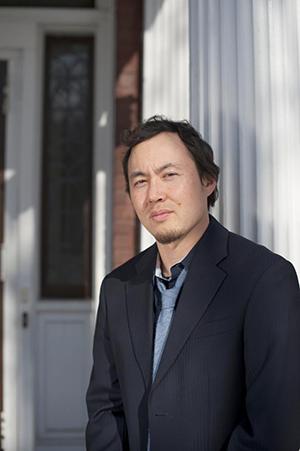 Ed Bok Lee knows just one word of Swedish: Tak. “It’s on my Lund’s grocery bag, and it means ‘thank you,’” he said. The poet knew little about Swedish culture or art, and had never set foot inside the American Swedish Institute in Minneapolis before he was selected to be a writer in residence at the museum through the Coffee House Press Writers and Readers Library Residency Program. For the month of January, he was fixture in the museum’s basement, where the Institute’s Wallenberg Library is located.

“The American Swedish Institute was founded and exists today because of Swedish immigrants to Minnesota and their descendants. And that got me thinking about today’s immigrants: Somali, Eritrean, Hmong, Mexican, Korean adoptees. And what will Minnesota look like in 100 years because of these immigrants?”

That ability to think back and forward in time led him to an experimental poetry- making process called metatranslation, in which Lee took poems culled from letters found deep in the ASI library’s archives and used the text as inspiration for his own poems. He doesn’t read Swedish, but he does have familiarity with Hebrew, Korean and English, and certain words in the poems bore a linguistic similarity to words he knew in other languages.

“Ja reminded me of Jahweh, or god. Han in Korean is a theme of sadness. These words sparked a wholly new poem, essentially treating the original as a found object,” he said. And the process didn’t stop there. Lee selected five visual artists to create short films based on his poems — metatranslations of his metatranslations.

Lee’s poems bear no, or only accidental, resemblance to the original, century-old Swedish poems. His English-language poems are filled with matters of the modern world, although the authors may recognize the themes of migration, alienation, loneliness and search for community from their own experience. Instead of a literal translation, Lee viewed the poems as tinder for the act of art-making.

“The literal is the antithesis to the soul of art. These poems would never have seen the light of day again had I not taken on the intention of using them as a spiritual substance. I’m interested in preserving the intention of art-making, celebrating the art-making impulse that is in all of us,” he said. “I am confident that everyone, whether they know it or not, will write a poem a some time in their life, whether it’s in school, or after a death or a birth or in a dream. Maybe it won’t be on paper, or maybe it won’t be in words, but we all have the impulse within us to express ourselves in some form of poetry. I hope to honor the original poets by keeping poetry going forward.”

‘No such thing as a true translation’

The ASI is filled with people who read Swedish, and many have asked Lee if he would like to know what the original poems say, but he doesn’t. “I want to linger in the space between knowing and not knowing. And ultimately, it doesn’t matter. The translation wouldn’t be accurate even if I did speak Swedish. There is no way to perfectly translate poetry across languages — the best you can do is guess at meaning. There is no such thing as a true translation. That’s why Dante’s ‘Inferno’ has been translated over and over again. And the poet Octavio Paz said, in order to translate a poem, the translator has to be a poet too, and the translation will only be as good as the poet.”

Lee is an associate professor at Minnesota State University and his 2012 poetry collection, “Whorled” (Coffee House Press), won the Minnesota Book Award and American Book Award. He says poetry has saved his life “more than once,” and he is always looking for ways to get more poetry into the world. He’s working with the Lanesboro Arts Center in Lanesboro, Minn., to create a Poetry Parking Lot in the town’s arts campus. It’s all part of his mission to get poetry into everyone’s lives. “We share jokes, we share recipes, and we should share poetry in just the same way.”