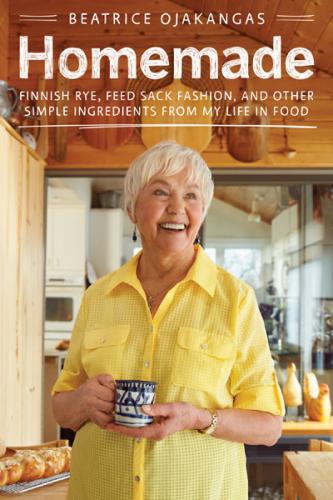 The Hinckley Fire Museum, just off I-35W in Hinckley, isn’t one of those fire department museums that display old-time fire-fighting equipment and memorabilia. This museum is dedicated to a specific fire, the devastating wildfire of Sept. 1, 1894. On that day, 418 white settlers and many more untallied Native people and backwoods dwellers died in an inferno caused by a combination of drought, hot weather and poor timber management practices at the height of the logging boom. The survivors had amazing stories of survival against the odds, such as the story Beatrice Ojakangas tells about her family’s experience in the fire in her new memoir, “Homemade: Finnish Rye, Feed Sack Fashion, and Other Simple Ingredients from My Life in Food” (University of Minnesota Press).

Her mother, a child at the time, was badly burned in the fire, and scar tissue covered her arms for the rest of her life. “I thought all mothers had ‘flowers’ on their arms. I thought it was beautiful. But it was very traumatic, for a lot of people. She didn’t talk much about it until the last 10 years of her life. And then the stories came pouring out,” said Ojakangas.

Now, in her first book that isn’t a cookbook — she has written 29 cookbooks, a feat that landed her in the James Beard Hall of Fame — Ojakangas tells some stories from her own life. From growing up the first of 10 children in a family of Finns in Northern Minnesota to becoming an influential writer and thinking on cooking and food culture, Ojakangas has collected some amazing stories. She wouldn’t put it that way, though.

“I didn’t set out to have any kind of special life. I just did what I wanted and needed to do, and opportunities kept coming along. But I come from people who don’t make a big deal out of things. Finns are very shy. They tend to pull back and not boast. They are just busy getting their lives together,” says Ojakangas, who has appeared on numerous TV programs and wrote a popular column for the Duluth News Tribune for many years. “But they are also very creative in their own way. The Finns that grew up rural tend to stay rural. They are not materialistic. They are not philosophical. Finns feel that they are really boring.”

Among the “boring” stories Ojakangas tells in her memoir: The time she hung out with Julia Child and Simone Beck, cooking in the “French chef’s” famous kitchen. The time she taught Martha Stewart how to roll lefse on national television. The times she traveled around the world, teaching people how to cook American food, and learning new recipes she brought home to American cooks. Then there was the time she worked for Sunset magazine, and influenced a nation just beginning to return to home cooking after embracing ready-made food. Speaking of which, there was the time she developed the recipe for frozen pizza rolls that made Jeno Paulucci a multimillionaire. Ojakangas made about $3 an hour for her efforts. She doesn’t mind too much.

“Finns are happy if they get what they need, and don’t ask for more. Some people get really angry when they learn about the pizza roll, but me? Oh, well. I agreed to work for that much money, so I shouldn’t complain,” she says.

Was pushed into home economics

Ojakangas wrote her memoir over a period of many years. She says she always wanted to be a writer, but was pushed into home economics in school, because options were so limited for girls at the time. “You think women are subservient today, but back then, it was nursing, elementary education and home economics. I enjoyed cooking, but I was forced into home economics. Although it turned out well in the end.”

Her memoir brings that message home over and over again. When she won a $5,000 prize in the Pillsbury Bake-Off, she handed the money over to her husband so he could go to graduate school. When she retired from a low-paying, highly demanding teaching job, two men replaced her, at higher wages. Magazines and cookbook publishers underpaid or entirely neglected to pay her for her work. She just kept plugging along.

Other stories seem harder to tell. One of her brothers was born deaf. Her mother was brutally abused by a stepmother. And her beloved father “had a terrible problem with alcohol. It was a point of contention in the family,” she said. “We lived in an era where he couldn’t relieve stress in other ways, and he became a binge drinker. It had terrible effects on our family. It was hard for me to revisit those days. But it was kind of a relief to tell the story, actually.”

The difficulties Ojakangas faced pale in comparison to the sum of her career, which turned into an extraordinary life in food. Ojakangas’ first cookbook, “The Finnish Cookbook,” was published in 1964 and remains in print today. Her work has helped preserve the ethnic food traditions of this immigrant population and inspired subsequent generations from all backgrounds to learn to cook at home, at a time when it is no longer a requirement for women. And she has finally written the book she always wanted to write — not a cookbook, although it’s full of recipes. But she isn’t making a big deal of it.